AGALEGA: The Cry of My People to the Maritime Republic of Mauritius 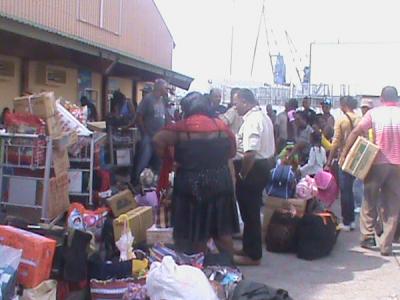 Agalega, an atoll situated at about 1,100 Kms North of Mauritius and 563 Kms South of Seychelles, is made up of two small islands, the North and the South, Tamarind and Avocado-shaped respectively. Separated by a narrow stretch of about 2 Kms channel formed by reefs on two sides. For long Agalega has remained an atoll in a forgotten sea. The installation of American naval forces in Diego Garcia, as from 1966, has changed the geopolitical and strategic situation of Agalega. Inevitably, Agalega comes on the forefront. The maritime trip to Agalega Island on board Mauritius Pride which was scheduled for 21 November 2012 has been cancelled twice (22th and 24th November) due to some technical problems. This cancellation brings back Agalega on our national agenda. A social movement known as Kolektif Respe, Drwa ek Dinite Agalega (K-RDDA) has been set up with the objective of rousing national, regional and international awareness about the plight of the inhabitants of Agalega. K-RDDA comprises members of the Association des Amis d’Agalega whose main leader is Mr Laval Soopramanien, the missionaries of the Catholic Church of Mauritius (Sister Olivia, Father Giani Losio and Ms Florise Chue), myself as Head of the Department of Applied Pedagogy of Institut Cardinal Jean Margéot and artists, individuals, Agalean parents, students and workers. The Department of Applied Pedagogy is organizing a Youth Forum in Agalega which should have been held on 24th and 25th November 2012. Beyond the technical problem of Mauritius Pride there is a substantial issue at stake for the maritime Republic of Mauritius.
No Pride at all
Waiting for registration, embarkation and being on board Mauritius Pride to wait for departure are exasperating and exhausting. There is no pride at all in our national ship. While all passengers are already on board we have to wait for goods, vehicles, and macadam to be loaded. On 21 November goods were still manipulated till 11 pm. Is Mauritius Pride not violating international maritime conventions as regard norms and security of passengers ? This has become untenable for the Agaleans. During the press conference Mr Laval Soopramanien made a strong appeal to the government to reactivate the construction project of a landing strip which was budgeted since 1998. The Mauritius Pride goes twice a year there to replenish food stock and other products. Agaleans who work in Mauritius and upper secondary students get back to their families for Christmas and the end of year festivities. There has been report aired on private radios that the island is running the risk of being out of stock for staple commodities and electricity. Had it not been the local press nobody would have known what is happening amongst Agaleans.
Institutional racism ?
How come that ever since 21 November (date of scheduled departure), no Minister and no MP have deemed it necessary to inquire about what is happening among the Agalean community. Agalega forms part of Constituency N0.3. The Ministry of Land & Shipping should have issued at least a press communiqué to reassure the passengers and inhabitants of Agalega. Nothing as such but instead people have to queue up at the Outer Island Development Corporation office in Port Louis to inquire when will be the next departure ! In fact, what currently happens to the Agaleans might translate what the Truth & Justice Commission report (2010) qualifies as ‘institutional racism’.
In the USA this term was used by the Black Power campaigners Stokeley Carmichael and Charles Hamilton (1967) to highlight the active and pervasive operation of anti-black attitudes and practices, not only at an individual, but also at an institutional (corporate and state) level. Although the term is still used in this way, the dominant understanding is related to the structural workings of institutions which exclude people regardless of individual’s attitudes. Hence institutional racism can operate through the normal workings of the system where rules, regulations, formal procedures and informal practices have the effect of discrimination against members of an ethnic group. TJC report does give a full description of the problems encountered by Agaleans.
The depopulation and indirect displacement of the people are the most critical ones. Whilst some 15,000 Agaleans are estimated to reside in Mauritius only 200 inhabitants continue to live in Agalega. Pregnant women are forced to have delivery in Mauritius and the child is declared ‘Mauritian’ and not Agalean on the birth certificate. Why ? Will the government of Mauritius hear the cry of my people and be sensitive to its affliction ?

The quest for a robot with a sense of touch