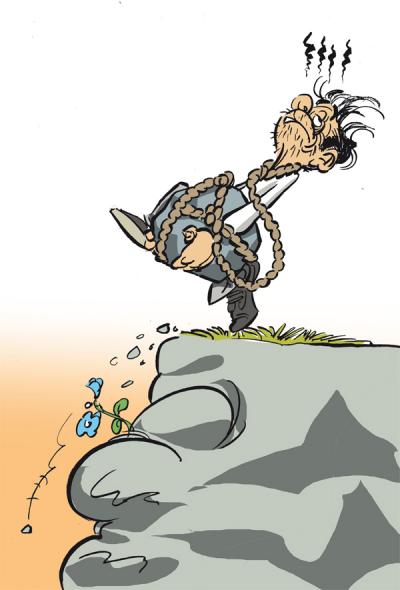 “Depression is about as close as you get to somewhere between dead and alive, and it’s the worst.”
?Elizabeth Wurtzel, Prozac Nation
“It’s not all bad. Heightened self-consciousness, apartness, an inability to join in, physical shame and self-loathing—they are not all bad. Those devils have been my angels. Without them I would never have disappeared into language, literature, the mind, laughter and all the mad intensities that made and unmade me.”
?Stephen Fry, Moab Is My Washpot
Depression has often been termed as the ‘invisible’ illness. Often mistaken for a momentary period of sadness or morosity, depression exists on the periphery of a specific category of mental illness, for many years misunderstood and not treated as a real ailment. It might therefore come as a surprise to note that over 350 million people around the world have depression, according to a report issued by the World Health Organization (WHO).
Depression is a mental disorder that undermines people’s ability to function well. Although we all have that occasional fluctuation in mood, depression is completely different. Depression forces the individual into a feeling of sadness that persists for long periods and significantly interferes with one’s ability to perform everyday tasks, at home, school or work. Depression is very difficult to diagnose because its symptoms occur in many other diseases/illnesses. Moreover, while some people ‘know’ when they are depressed, others do not realize its toll until it’s too late. The most common symptoms of depression are periods of persistent (often unexplained sadness), marked loss of interest or pleasure in activities, disturbed sleep, change in appetite, chronic fatigue and loss of energy, poor concentration, and in extreme cases, recurrent thoughts of death.
Depressive episodes range from mild, moderate, to severe and has been associated with suicide in many cases. There are two wide categories of depression and these are unipolar depression and what is called ‘bipolar mood’ depression, the latter being a disorder on its own. Depression can be accompanied with manic episodes, in which case it often leads to bipolar disorder in many patients. Manic depression or bipolar disorder involves patients experiencing episodes of an elevated or agitated mood, described as hypomania (individuals appearing energetic, excitable and highly impulsive). The most common treatment for depression consists of basic psychosocial support combined with antidepressant medication or psychotherapy, such as cognitive behavioural therapy, interpersonal psychotherapy and problem-solving treatment.[1] While the causes of depression are still unclear, experts say depression is caused by a combination of factors, such as the person’s genes, their biochemical environment, personal experience and psychological factors.
As a ‘silent’ and ‘invisible’ illness, with most patients choosing not to disclose their illness because of the stigma associated with depression, and the fear or rejection, it is one of the most misunderstood ailments. People with depression are often viewed as being ‘weak’ and they might be told to ‘pull their socks up’ or simply to ‘snap out of it’. The sad truth is that depression is a very ‘real’ illness, and ‘snapping’ out of it is not as easy as it seems. These comments by sometimes insensitive or just plainly uninformed people, are far from helpful for the individual suffering from depression, as the latter feels inadequate and weak, thus affecting their sense of self-esteem and denying them the chance to heal more quickly. The world needs to be educated about depression and generally, there should be more campaigns aiming to shed light on the illness, possibly potentially leading to a culture of ‘empathy’ towards patients.
As for patients suffering from depression, it is important to acknowledge that you really are ill, and try not to bottle up your feelings. Seeking help early on is the best advice for people showing depressive tendencies or symptons. Talking to someone such as a friend or relative is important, as is consulting your GP who might later refer you to a psychiatrist or psychologist. People who have depression are usually high-achievers and might treat their stint of depression lightly. This should be discouraged and people with busy or hectic schedules should even consider taking a spell off work or school. Getting better should be a priority because depression should be treated like any other illness; with the sick person requiring proper medication, rest, and then slowly getting back to the frenetic pace of normal life. Also, as depression takes many forms such as post-natal depression, bipolar disorder, and seasonal affective disorder, it is important to be diagnosed properly and take the suitable medication for each type of depression. As patients suffering from depression might relapse, it is also vital to continue with treatment long after the signs of the illness have disappeared and keep regular visits with your psychiatrist.

It cannot be stressed enough that depression is a ‘real’ illness. More often than not, it’s easy to label people who suffer from depression as seeking attention, unable to cope with life’s ups and downs and also as being weak, lonely and overly dramatic. However, people who suffer from depression suffer as much as someone having a physical illness, or even more. This is because many physical ailments like diabetes, cancer, migraine, hypertension, etc. can be diagnosed and treated. However, depression lurks like a hissing snake in the shadows and can pounce on the victim, unawares. Someone describing his experience of depression said that it ‘happens slowly, then all at once’. Even though treatment exists for depression, in many cases, patients are trapped in their depressive ‘shells’ and take months, and even years to heal completely. People suffering from depression are far from being weak; indeed the most notable persons who have battled with depression are Woody Allen, Charles Baudelaire, William Blake, Winston Churchill, Johnny Depp, Fyodor Dostoyevsky, Graham Greene, Audrey Hepburn, Stephen Fry, John Keats, Frantz Kafka, Hugh Laurie, and Mozart, amongst others. This list definitely shows that people with depression can be strong, talented and amazingly inspiring, and that far from stigmatizing them because of their illness, we should strive to understand them.