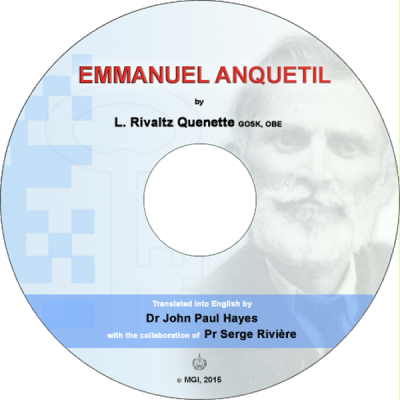 The Mahatma Gandhi Institute has launched a translation of Rivaltz Quenette’s Emmanuel Anquetil, which was published in 1985. The translation was carried out by Dr John Paul Hayes, who is a great-grandson of Emmanuel Anquetil and Pr Serge Rivière. The e-book was launched amid several members of the Anquetil family settled in the UK and Finland, the Quenette family as well as many distinguished guests on Monday 7 December.
To write this book Rivaltz Quenette had meticulously searched for material in the Archives of Mauritius, the National Assembly’s papers, the National Archives of UK and read through the reports of numerous newspapers.  What adds greater value to his historical work is the pilgrimage he made to Wales, where, through meeting with John Anquetil, the son of Emmanuel, and his family as well as people who had known “George” he got a sense of Anquetil’s formative years in trade unionism and activism in the British Labour Party.  It was there that Anquetil developed his sense of service to the cause of workers as he witnessed the miners’ struggle, how their mobilization brought elating victories, but also serious setbacks when the conservative forces leagued to quash their advances.  Rivaltz got a sense of Anquetil’s own involvement in the political life through his activism in favour of the Labour representatives, Willie Cove and Creech-Jones.  Anquetil gave fiery speeches in the meeting halls and his commitment to leftist ideologies was clear.  However, as the Great Depression hit the mines and docks of Wales, Anquetil as an unemployed foreigner, had to leave for Mauritius, accompanied by his son, John, in December 1936.
He joined his native island at a time where the Great Depression was creating havoc, with high unemployment rate and reduced wages, which led to difficult times in workers’ homes.  Dr Maurice Curé had just founded the Labour Party of Mauritius with the support of a group of friends.  Trade Unionism was in its prehistory because any bill that aimed at introducing it in local polity was resisted by the employers, who dominated in the Legislative apparatus.
Maurice Curé wanted to have representatives of workers at the Legislative Assembly to fight for their cause.  When Anquetil joined the fray he wanted to organize workers at the grassroots and empower them through education in trade unionism, so that they could fight for their rights.  Meanwhile the Colonial Government and conservative forces joined hands to repress the budding Labour Party through the tribunals and through economic pressure.  Curé resigned as President and passed the torch to Anquetil.
When Trade Union Legislation was introduced following the unrest of 1937, where several persons were killed at l’Union, Anquetil began organizing trade unions to mobilize workers, ably supported by Pandit Sahadeo and other stalwarts.
The war years were hot in Mauritius, with the Labour Party campaigning to mobilize workers, clamouring for constitutional reforms that would give greater representation to the people at the Assembly, while the Jan Andolan was campaigning for the cultural upliftment of Hindus and facing repression and imprisonment.  The colonial authorities were bent upon quashing any form of unrest and employed the age-old method: Divide and Rule.  They manipulated the trade union movement so as to remove Labourers, who were Indo-Mauritians in majority, from the influence of the Labour Party, which could retain the Artisans and Dockers, who were in majority Creoles.  The wedge of communal division was sown with the authorities favouring leaders who aspired for communal representation.
At the height of the showdown when Governor Clifford quashed a strike at the docks in 1938 Emmanuel Anquetil was deported to Rodrigues, with John.  However, his supporters in the British Labour Party pressurized the colonial government for his release.  When he returned to Mauritius Island after two months he pursued with total abnegation his self-imposed mission to emancipate the workers.
Anquetil never swerved from the objective of uniting workers along class lines while resisting communalist division favoured by the conservative classes.  He refused a lucrative job offered by the government in order to keep his independence.  That meant stark poverty for him, who had to rely on friends and well-wishers to survive.  He devoted himself in an exemplary manner, especially during the strike of 1946 at Ferney, where for a fortnight he was by the side of the strikers day and night, putting great pressure on his ailing body.