Departure of S.S. Nowshera from Mauritius
As mentioned earlier, the initial departure date of S.S. Nowshera from Mauritius was scheduled on 8th November for Colombo, but there had been three more postponements, the first was for 12th, the second for 14th and the third for the 15th November 1901 at five O’clock in the evening and its destination was not Colombo but Bombay. The Daily Publisher, Le Cernéen, Les Petites Affiches, The Standard and Le Journal de Maurice had advertised the date of departure of S.S. Nowshera to be on Friday 15th November at 5 p.m. According to Le Journal de Maurice, SS Nowshera was carrying 553 kg of sugar from the Chamber of Commerce. Besides, according to the new maritime document unearthed recently from the National Archives of Mauritius, S.S. Nowshera was also carrying 60 passengers and 2 children to Bombay.

Entry of Indians in Politics and Education
After more than a century, when we read or hear people saying that M. K. Gandhi had asked our forefathers to give education to our children, it seems that they were not sending their children to school. But this fact is not correct, because when we read the Yearly Records of the Education Department, whatever was the number of school population in 1901, the number of the Indian pupils attending school amounted to half in Government and non-Government schools. Was it not a remarkable landmark in the development of the Indian Community at the turn of the 20th century when M. K. Gandhi had visited Mauritius?
Furthermore, it is interesting to consider whether the Indians were not involved in the country’s politics. This contention is also unfounded, because there are ample instances to substantiate that the Indians were taking active part in the country’s politics as from 1890’s. This means that they were in politics a decade before the visit of M. K. Gandhi to Mauritius. In fact, the Indian candidates were contesting the yearly Municipal Elections as from 1890, but they were unsuccessful until 1895. But in 1896, Dr. Hassen Sakir was elected in the Municipal Council election for a period of one year. Furthermore, he again contested the Municipal Elections in 1897 and 1900, and got himself elected in both for a period of three consecutive years. Not only this! Another Indian candidate, Abdulla Dustageer, who was also known as Abdulla Kalippa had contested the General Elections from Savanne District in January 1896 and January 1901, but both times he was unsuccessful.  Yet, these instances were ample proof that the Indians were involved in the country’s politics, long before the visit of M. K. Gandhi to Mauritius. 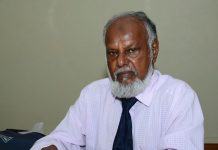