The real fact is that nothing had been done for the Chagossians by the Mauritian Government during those decades following their eviction from the Chagos until the case was taken up by Richard Gifford in late 1990s, and later by Sir Anerood Jugnauth whose determined efforts brought the issue to another level. But where is Richard Gifford, one of the torchbearers in that Chagos marathon? Having done his bit, he seems to have been left by the wayside.

Revival of the Chagos issue

If Richard Gifford started the revival of the Chagos issue in the late 1990s, Sir Anerood Jugnauth brought it to its conclusion with the ICJ’s ruling on 25 February, 2019. Sir Anerood, with credit to his wisdom, this time took the Chagossians on board and enlisted their support and participation, which the Mauritius Government never did before. Chagossian leader Olivier Bancoult himself had a change of heart in 2018 when he declared that the Chagossians and the Mauritius Government were on the same wavelength.

But we may now ask the question: Quo Vadis, Cha(e)gos?  The date of 22nd of November, 2019 was anticipated to be a fateful day for the British when they would have to return the Archipelago to Mauritius, according to the deadline voted by the UN General Assembly in May 2019. But nothing happened, The British seemed to have put a cork in it in relation to the ICJ findings and the UN vote. They keep quiet and won’t move. What is Mauritius going to do? Prime Minister Pravind Jugnauth seems to have taken a more conciliatory attitude when he told the National Assembly, following his re-election, that Mauritius was not against the American base on Diego Garcia. Mauritius demands its sovereignty be recognised, he said.

But the British have said all along, since the days of British PM Margaret Thatcher and before, that the Chagos would be returned to Mauritius once it is no longer required for defence purposes. This was brought home by the Iron Lady to Sir Anerood Jugnauth who was on an official visit to the UK in 1988. At a press conference in Mauritius in May 2019 following the UN’s vote, SAJ, in his new role as Minister Mentor, reaffirmed the statement made by Mrs Thatcher in 1988. Margaret Thatcher further told Sir Anerood that the Chagos issue was not negotiable. The Chief Minister Sir Seewoosagur Ramgoolam was told the same thing in 1965 by the then British PM Harold Wilson at a private meeting at Downing Street during the constitutional talks (?).

It is known that many sorties were made from Diego during the Gulf war in 1990. With so much unrest in the Gulf at this very moment, with British oil takers being seized and more so with the increased tension following the murder of Iranian General Qasem Soleimani, it is hard to see Diego Garcia being no longer required by the British and the Americans. The return of the Chagos to Mauritius means that the Americans will have to negotiate with Mauritius to retain the base. Will President Trump be willing to do so when a contract has been signed with Britain for another 20 years?

It is understood that the American Chagos lease has been renewed by Britain for 20 years from 2016. Well, within the next 20 years it is almost certain that Diego Garcia will no longer be required by the British and Americans for defence purposes. Are we entering the era of Star Wars when interstellar missiles will make military bases on planet earth absolutely useless? The Americans have resumed their moon exploration in earnest. Many countries have turned their eyes to moon as a landing base for their rockets. Even India has already selected its landing spot at the south pole of the moon. Russia is reigning supreme in space exploration. Europe (jointly), China, Israel are all on the moon adventure at great expense, what for? Surely, not for fun! Iran does not want to be left behind. With America’s latest supersonic intercontinental ballistic missile travelling 27 times faster than the speed of sound, it will be a matter of minutes to reach any target on planet earth from space. Star Wars will no longer be just a computer game for kids.

It is not inappropriate to ask as to who will want to go back to settle in those distant desert islands when abandoned by the present occupiers? In a BBC interview, after the ICJ hearing, the new generation of the Chagossians settled in the UK  made it known that they would not go back at the risk of losing their UK citizenship, especially as some of them were facing deportation at the moment.

However, Mr Allen Vincatassin, President of the Diego Garcia and Chagos Island Council, an official body elected in 2011, told the TV network ‘Russia Today International’ in November last, that Chagos should not be returned to Mauritius and should remain British. It should eventually become an independent country for the exiled Chagossians.

But one other question that may be asked is when the British and Americans will have left the Chagos Archipelago, who will pay for the resettlement of the Chagossians and provide all the necessary infrastructure for water supply, sewage, electricity, hospitals, schools, police, prisons, fire services, road and communications network, transport provision, the administrative set-up and office buildings for various departments of the administration, plus the professionals like doctors, engineers, lawyers, teachers, etc & etc? Even the system put in place by the Americans for service personnel, if left behind INTACT after their departure, will not be adequate for an island-wide requirement and for the atolls (even if only some of them are to be inhabited). Will Britain be willing to pay for the resettlement and the services after having been forced to surrender the Archipelago’s sovereignty to Mauritius or lose its ‘permanent’ seat on the UN Security Council, as intimated by former British High Commissioner to Mauritius David Snoxell this early January on Yahoo news? Will Mauritius be able to pay for the needs of its dependencies, once restored? Can or can’t, will Mauritian taxpayers agree to foot the bill?

The Chagossians are asking for their RIGHT to return to their homeland, which cannot be denied, and Mauritius is fighting for its sovereignty over a group of islands, 1500 miles away from its own shores, which has been acknowledged by the UN. Former President Cassam Uteem and some political figures, by way of a petition, urge Prime Minister Pravind Jugnauth to demand the Americans to dismantle their military base on Diego Garcia forthwith, Mauritius’ U.S. Ambassador, Jagdish Koonjul, advises his host country to negotiate with Mauritius for a new lease of the Chagos, a move which has been chastised by leader of the Opposition, Arvin Boolell. An elderly Chagossian spokeswoman told the BBC World Service in December that Britain was waiting for all the ageing Chagossians to die so that there would be no one to go back. PM Pravind Jugnauth in turn told the presenter that to wait for the Chagossian elders to die is a crime against humanity. The question, from the BBC presenter, as to what Mauritius intended to do received no appropriate answer.

To crown it all, there was serious speculation of a second gulf war over the killing of the Iranian General Soleimani. The shooting down of the Ukrainian plane by mistake may have reduced Iran’s war cry towards the US, but possibility of conflict is still prevalent in the Middle East. Will the hawkish U.S. President be in any mood to talk to Mauritius about Diego Garcia? According to press reports (though not confirmed) Young Prime Minister Pravind Jugnauth has intimated that the Chagos issue would be on the table when he would meet with the British PM Boris Johnson in London during the forthcoming UK-Africa Investment Summit. Is the Chagos now negotiable when SSR and SAJ were told otherwise? Many people at home are recommending negotiation as the right option but we need two or more people to negotiate.

What does the future hold for the Chagos Archipelago?

† Cha(e)gos, as pronounced by the British. 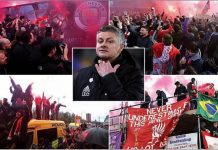