After the recent elections, it would be more appropriate to congratulate the winning alliance on its clear victory, than to bemoan the debacle of the Labour Party. It is its second debacle. The first one in 1982 was under the leadership of Dr S. Ramgoolam.  This one is under the leadership of his son, Navinchandra Ramgoolam. The Labour Party is the sacred legacy of the great Anquetil. It was yielded by Guy Rozemont by default in 1948 to Dr S. Ramgoolam.

Following his return from exile in Rodrigues in November 1938, Anquetil set himself to work to reorganise the trade union movement. It was a patient and thankless task especially given his limited means. He would crisscross the country on foot organising workers and often attend conciliation meetings to resolve disputes. In 1939 he founded the newspaper “Le Peuple Mauricien” which he also edited for a time. The paper would record the demise of “brothers” Sada Curpen and Claude Geneviève in an English obituary signed ‘A Comrade”. As Dr Curé gradually left the Labour Party to its own devices, it befell upon poor Anquetil to shore up its fragile edifice. He and his comrades lived on a shoestring budget. Nonetheless in 1942 at the request of the Fabian Society he would meet the Governor to discuss matters of national interest. From that moment until his death he is the only spokesman of the downtrodden and the labour movement. There is no evidence of any interaction between him and Dr S. Ramgoolam who had been nominated to the Legislative Council in 1940. In 1945 the Governor is forced to induct Anquetil into the Committee for Constitutional Reform along with members of the Legislative Assembly.

Failing health would cause him to make Rozemont his deputy, but he had strong reservations and would violently rebuke the latter in 1945 because of his excessive drinking. On his death, Anquetil was greatly mourned as witnessed by an obituary in “Advance” and a number of panegyrics in “L’Oeuvre” of Dr. E. Millien. The report of the Labour Department in 1947 by its director Wilkinson would pay a remarkable tribute to Anquetil the leader and statesman. Following his untimely death on 29th December 1946, the precious legacy of the Labour Party would vest into the thirsty Rozemont who would ally himself with Sookdeo Bissoondoyal for the elections of 1948, with disastrous results. The Labour Party would then take within its fold recently elected independent Council members including Dr S. Ramgoolam who would be elected leader in view of his age. He would quickly tighten his grip on the Party. There is evidence from the archives in London that the British had already singled him out as the most likely person with whom to do business. “I have every reason to believe that one can bring the doctor to our point of view”, would promise the Governor Sir Hilary Blood in a letter to the Secretary of State for the Colonies as early as 1950. With the help of Port-Louis traders Dr S. Ramgoolam would increase his stranglehold on the Labour Party. Ringadoo, who hailed from a trading family, would be harnessed as secretary upon his election to Council in 1951. The purse strings of the party would be in the hands of Sunassee and later A. V. Chettiar, two other Port-Louis traders. In 1953 he would lure Satcam Boolell, who had been elected from Moka-Flacq under Bissoondoyal, away from the latter. In 1959 following the general elections of that year he would welcome Harold Walter into the party, an Anglican close to the British establishment. The Labour Party would get closer to the oligarchy and the Parti Mauricien. At the Constitutional Conference of 1965 Diego Garcia would be ceded. Independence was followed by rioting in Port-Louis and a hasty coalition was cobbled with the PMSD in the “national interest”. Labour would lose massively a by-election in 1971 in Triolet. Soon after the virgin state of Mauritius would decree a state of emergency and shamelessly imprison a number of MMM leaders subjecting them to a prison regime that was both harsh and repressive. Labour would in effect lose the elections of 1976 but would hang on to power until the debacle of 1982.

The Labour Party would gradually lose its grassroots support. Instead nondescript and amorphous henchmen would represent villages and suburbs. It would lose the support of the unified masses. Instead it would seek communal support. The fracture of society engineered by the right could not be countered by its beleaguered leaders. Its support for the working classes waned until called to order by the Commission of Enquiry of Judge Ramphul which awarded a much needed 11% increase in salary in 1971. Its ideologues would pass away or leave the party so that by the time of independence it was peopled by newly inducted power mongers. Dr S. Ramgoolam would tighten his grip even further through the party secretariat and its treasury. Party ideology would become fossilised. From the sixties, rent-seeking and cronyism would become rampant. There would be rumours of much drinking and womanising. The populace would suffer from the ills of increasing poverty. Later through the device of a Commission of Enquiry on the sugar industry (of which Sithanen was a member) it would abolish the export duty which had provided substantial revenues to the state. At the time of its first debacle in 1982, the party had become a distant and wistful memory to those who had battled for freedom and uplift.

In 1991 after being made leader of a skeletal opposition he would in effect absent himself from Parliament on the grounds of completing his studies. Under his stewardship some of our crown Jewels were downgraded into satrapies under spineless minions. Our national airline had to survive a hedging contract where it effectively lost billions. Interest on private savings were taxed for the first time when thrift needed to be encouraged. Public sector enterprises would be headed by clueless cronies. The party could not develop any fresh thinking or programme. In the villages and suburbs appointed sycophants would report directly to him bypassing all the structures of good governance. It is this emasculated party that would be painfully dragged along by him. A coterie of unholy individuals would form both his praetorian guard and advisors. It is such mindless persons who would advise him on the measures the party would need to adopt in case of victory. They were instrumental in drawing up its disastrous list of candidates. Its campaign managers were predicting an easy victory. Navinchandra would distinguish himself early in his political career with reports of wanton parties where jewels would be missing. Since 2015 he has been plagued with a party coffer that was overfilled. After the 1991 elections he would claim electoral fraud with the encouragement of his court jesters. He is believed to be claiming electoral fraud again.

Currently my hero is Frank Lampard of Chelsea who like me admits to being fairly superstitious. My ancestor the venerable Nababsing Roy and his no less venerable wife arrived in Mauritius in 1857, the year of the Indian Mutiny. They would set camp in Belle Rive where I understand the ancestors of Navinchandra had also set camp. Could it be that the ghosts of Belle Rive contrived to drag the truant there, so that pretence could be whipped? Even so, what do we say now, to the ghost of the great Anquetil?

“The curfew tolls the knell of parting day

And leaves the world to darkness and to me.” * 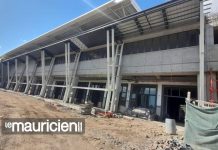