The French government has eventually backed down in the face of the violent protests of the ‘Gilets Jaunes’. It has suspended the fuel carbon tax rise and the increases in gas and electricity prices which are due to come into effect on the 1st of January.

Unlike the citizens of our country, the French people are fierce protesters whenever their government comes up with unpopular measures. If they had not voiced out their anger and marched the streets of Paris the French government would have never backed down. Emmanuel Macron was elected with an overwhelming mandate for sweeping economic reforms, but he has completely, failed in his task to reduce income tax and ease up the hardship of the french people mainly, those at the bottom and middle of the social ladder. The French people are losing confidence in their government and are seeing him as a president for the rich.

Over here, in our beloved country, the government is always given an easy ride and is not bothered or faced with massive and non-violent public protests no matter how unfair and unpopular measures it imposes on the people. We are really, ‘ene lepep admirab’ who just groans for a while and then keeps quiet. We saw it when the government added a four-rupee tax on every litre of petrol and diesel at the pumps and also when it increased the prices fuel by 10% this year. When the local government elections were postponed ‘lepep admirab’ kept quiet. This current government is also following the footsteps of its predecessor by delaying the village elections until 2020 and still the people do not seem to voice out against this anti-democratic decision.

Unfortunately, unlike the French, we are timid, lack guts and don’t have appetite for non-violent streets protests. We only make noises here and there and then we end up accepting any bad decision which the government takes. We are not unanimous when it comes to show support to others who are fighting for good causes and their democratic rights. It’s high time, the citizens of our country started standing firm against any government’s decision which is not in the interest of the country and have the courage to protest when there is abuse of power, corruption, nepotism and any attempt to obstruct and downgrade our democratic system. 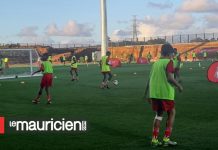