Can the world be the same again after COVID-19 would have gone? Not necessarily. Past pandemics had reconfigured human society and even changed the course of history.  The virulent Justinian plague that struck the European continent (AD 541-544) provoked the decline and fall of the Roman Empire. Several centuries later, the Great Pestilence or the Black Death (1347-1351) swept like a deadly whirlwind across Europe decimating up to one third of its population.

In the aftermath of the Black Death, a ravaged Europe witnessed a deterioration of the economic and social landscape. Trampled under a rigid feudal system, peasants in the continent felt suffocated and tried to overthrow the system in order to improve their social conditions.

In medieval France, for example, the outbreak of the revolt by the “Jacquerie” in 1358 was in response to the distress the peasantry was fraught in. To add to the miseries of the population, the French government imposed a heavy taxation on the head of each one of them. The peasants’ plight was further exacerbated by the continuous ravages inflicted during the Hundred Years’ War in which France and England were locked into. The insurrection as a protest against the highhandedness of the authorities was crushed by a combination of the royal force and the nobility. At least 20,000 agricultural workers, according to French historians, were killed including the leaders of the ‘Jacquerie’, Guillaume de Cale and Etienne Marcel.

An almost similar uprising broke out in England in the post-Black Death era. The Peasants’ Revolt of 1381, though dismissed as a “failure” by some British historians because it made no immediate impact, having been crushed within a short period after it erupted.

For others, the effect of the rebellion was seen in the longer term when the character of English society began changing early in the fifteenth century. But the revolt needs to be viewed in a different light, as the historian Charles Poulsen points out that “the concept of freedom” born out of the revolt, “was not killed and was to become the cornerstone of the national political structure”. In short, as another historian, Steve Justice, writes, “the Peasants’ Revolt was the beginning of English ideas about freedom”. From that perspective, the Peasants’ Revolt sowed the seeds of freedom which in today’s world is cherished as a precious commodity.

What effect did it produce in the medium term? There is no contention that the Peasants’ Revolt freed the ‘villeins’, that is, the bonded workers, from the clutches of the traditional feudal system. It forced Parliament to revise the Statute of Labourers introduced in 1351 so that better working conditions could be offered to agricultural labourers. The new relationship that gradually developed between landowners and workers helped in destroying the feudal system. In the next fifty years, therefore, a new era dawned upon England when free labourers had a choice as to whom to offer their services, negotiate wages and could marry without having to seek permission from their lords.

The root cause of the revolt was attributed to the havoc wreaked by the Black Death. Two million out of a population of four and a half million in England, according to G.M Trevelyan, were wiped away. That demographic jolt created a huge labour shortage. Vast acres of lands remained untilled for years. Foods’ costs skyrocketed, sinking the population deeper down in the quagmire of poverty. Those who survived found themselves in a stronger position to bargain for higher wages and better labour conditions.

The lords and barons resisted such claims by maintaining the status quo. They succeeded in getting Parliament to pass the ‘Statute of Labourers’ (1351) that pegged wages at pre-plague levels. Furthermore, the Statute restricted the free movements of labourers  from one manor to another.

But the plight of the population was hardly anybody’s concern. King Edward III and his son, the Black Prince, were more committed to undertaking military campaigns during the Hundred Years’ War, raiding France on several occasions in the hope of snatching the French throne from Philip of Valois, one of the claimants. Those military expeditions were regarded as disastrous both for England and France. Worse, they depleted the coffers of both countries.

Like in France, in England, too, the poorer section of the population had to bear the brunt of royal extravagances and ambitions. A quick-fix solution in order to replenish the royal exchequer was the Poll Tax  introduced in 1377. The tax was levied on every individual above the age of 15, rich and poor alike, at the flat rate of 4 pence per adult.

Accepted by all without a whiff of murmur, the Poll Tax, a one-off tax, was repeated in 1379. But it met with a revolt when it came back for the third time in 1380 with the rate having gone up three times. The population cried wolf. The tax was found hard to bear and very much resented.

A mild protest in Essex by a local tradesman refusing to pay his dues ignited the sparks of rebellion. The tax collector was beaten up and driven out of town by the local population. The Essex incident broke the proverbial passivity of the population. It bolstered the spirit of resistance that spread to other parts of the country.

Led by a “Kentish labourer”, Wat Tyler, and an “itinerant preacher”, John Ball, the peasants looking like a “terrifying force of angry men” marched “threateningly” to London to ventilate their grievances to the young king Richard II who had just succeeded his grandfather Edward III.

Their rallying cry was that “all men in this realm of England should be free and of free condition”, and that “all traitors be put to death”. 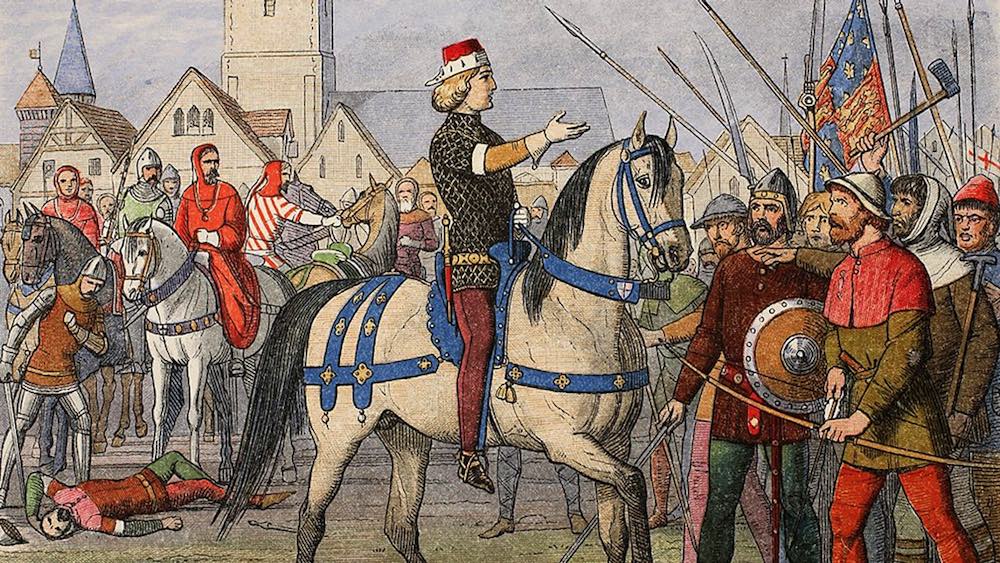 In London, the rebels ransacked several buildings belonging to the aristocrats.  The opulent Savoy palace, home of the king’s uncle, John of Gaunt, Duke of Lancaster, was set on fire. Flemish workers accused of having taken jobs in London were killed. Prisons were forced open to free prisoners. They launched a manhunt targeting those “traitors”, that is, those associated with the introduction of the Poll Tax.

Top on their hit list figured John of Gaunt. Sensing the danger, he fled to Scotland. John of Gaunt was the most powerful man behind the throne after the death of Edward III and the Black Prince. But he was also the most hated man on account of his ruthless enforcement of the Poll Tax in order to finance the military campaign of the Earl of Buckingham. Besides, he was viewed as a “corrupt” man and a “failure” in all that he did.

These men hiding in the Tower of London where the king had gone to seek refuge in a more safer place were dragged out by a group of rebels and taken to Tower Hill where they were beheaded amid triumphant applause.

The king was at Mile End, off the Thames, at that time talking to the insurgents in order to appease the tension. He agreed to make a number of  concessions namely the abolition of the Poll Tax and a review of the Statute of Labourers to include “rights” and “privileges” of workers.

But it was all a drama or rather a pre-planned plot that took place the following day, 15 June 1381 when king Richard summoned the rebel leaders to a second meeting at Smithfield.

There Wat Tyler made some more demands. That the Church’s wealth be distributed to the poor, that there should be no more lords and that all men should be free and equal.

An altercation between Wat Tyler and William Walworth, the Mayor of London took place. The latter was reproaching Tyler for his “insolence”  and lack of respect when addressing the king as “Brother” and  without having dismounted from his horse. Wat Tyler tried to strike the Mayor with his dagger but missed him whereas Walworth drew his sword and struck back wounding Wat Tyler who fell to the ground. He was then stabbed in the neck.

Walworth earned a knighthood in recognition of his “services” and later a statue was erected to commemorate him.

Wat Tyler became an early working-class martyr in history. No doubt, he inspired many British radical politicians in the centuries that followed. In modern times, the radical George Lansbury, leader of the British Labour party, said in 1928 that the “ancestry of English socialism could naturally be found in the events of 1381 and in the lives of those rebels, Wat Tyler…..”.

At Smithfield, the rebels could have captured or killed the king and perhaps ended the monarchy but they hesitated.. According to David Horspool, that incident at Smithfield was a turning point in British history.

The ardour of the peasants seemed to have dampened when their leader was killed.  The king seized that opportunity to go emotional with an appeal saying “surely, you do not wish to fire on your own king. Do not attack me and do not regret the death of that traitor and ruffian. For, I will be your king, your captain and your leader”.

The peasants dispersed  believing their demands were met. But the king reneged on his promises, saying “villeins ye are, villeins you shall remain”. He despatched troops to the countryside to track down and execute those rebels.

But the “concept of freedom was not killed in the repression”, argues the historian Charles Poulsen. The labourers in the Middle Ages threw up the ideas about freedom which down the centuries were nurtured and grew to become a key element in our modern society and political structure.