Nation Split Over Which is Worse

Is it his stupid flat tax which has broken the economy and created a Rs1,500bn GDP gap by the end of last year because we never got the 8% growth he promised for the past fourteen years or his ethnic electoral model which he used to forecast an 80% vote share for the LP/MMM alliance in the 2014 general election? While some but not all of the problems created by his crappy economic model have been discussed not enough has been said of that ‘40%+40%=80%’ prediction of his faulty model which he no doubt used to change constituency — anybody thinking of changing ridings these days should avoid it as plague — and in the process elevated the status of reading tea leaves to that of an entirely respectable trade.

The chart is a modest contribution to fill this gap. As you can see the bean-counter has made an error of 846,273 votes. That’s more than the 785,645 votes that alliance actually got. Which means that 40%+40% turned out to be equal to 38.5% — the thought of him being Minister of Finance again must have sent shivers down the spine of many voters. So the red/purple team got less than half what he predicted. It looks a lot like the GDP growth rate we’ve been clipping for the past seven years. They have all been less than half the 8% target. Is there a pattern here? Maybe. Maybe not when we look at the collapse of our savings rate. In any case 846,273 is a huge number of votes. It’s at least 400,000 larger than the votes that made us an independent country. In fact it’s even greater than the votes of the Independence Party and the PMSD in the August 1967 election put together. He’s now saying he got misreported and never said that. Even if we grant him this just for now I recall hearing him say that he’s predicting a 60-0. This implies a vote share of a little over 65% (the vote share of the LP/MMM in 1995) and a still gigantic error of 543,667 votes.

If you ask me I don’t think it’s important we decide which is worse. These are both catastrophes that need to be analysed carefully and prompt voters to require political alliances to have their tax policies among other things detailed in affidavits. They should also help us stay alert and not get distracted by the ethnic hogwash that’s going to be thrown our way in the next few months. Let’s stay focussed on the real issues. There’s no shortage of them. 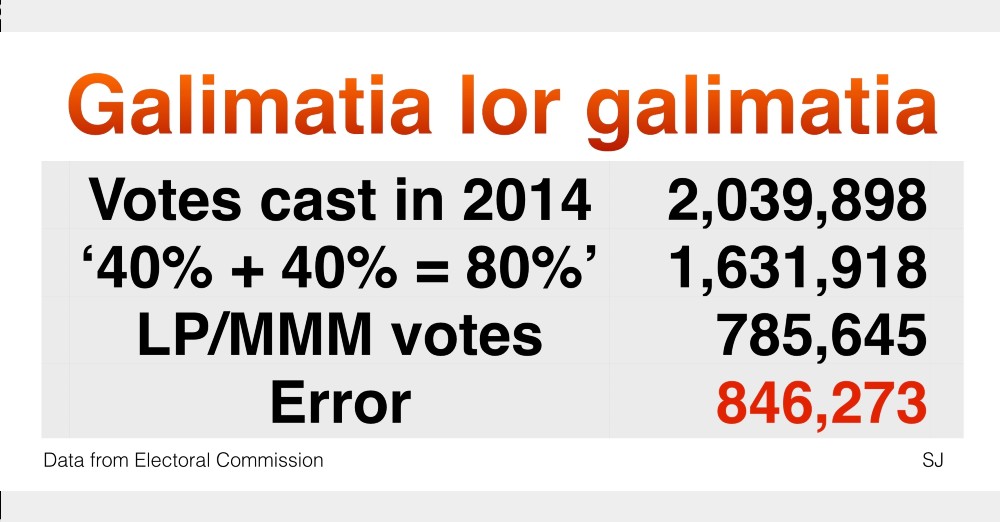