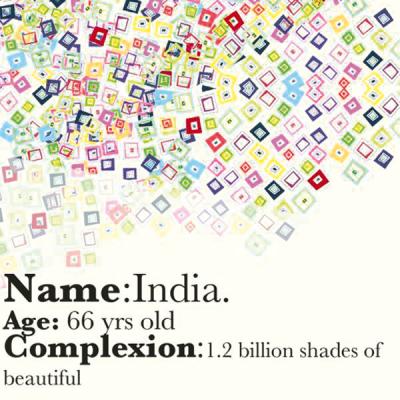 Yesterday (15th of August) on the occasion of India’s independence day, Women of Worth (WOW), an NGO based in Chennai, launched a nation-wide poster campaign to highlight the issue of colour which has great importance in Indian society, as in most societies. Even though the majority of its citizens are dark-skinned, India is obsessed with lighter colour skin. Its culture equates fair skin to beauty and high social status. Matrimonial adverts openly mention the desired colour of the prospective bride which cannot be otherwise than fair.
The poster painted with a multitude of small squares and rectangles of various colours, carries the following caption :
Name : India
Age : 66
Complexion : 1.2 billion shades of beautiful.
Women of Worth (WOW) has since its launch a few years ago, relentlessly campaigned against the dominant culture which discriminates against and makes people of colour feel inferior.
The campaign has received a tremendous boost through the famous actress, Nandita Dass who openly supported it. Nandita Dass who is dark skinned, said that she was tired of always being defined in press interviews by the dark colour of her skin. Journalists would constantly refer to her as “dusky”. As all women of colour, she added that she has experienced the Indian prejudice against dark skin since childhood. “People have asked me ‘how can you be so confident when you are so dark ? ‘ or ‘we know you don’t like light make-up but you are playing an upper middle class character so please understand’. Whoo, whoo… so colour is also a class issue – members of the upper class are expected to be white and the more one comes down the ladder, the darker their skin. Besides, it is definitely a caste issue too.
She is also pitted against Bollywood star Shah Rukh Khan, who is promoting the advertisement campaign for a skin lightening cream called “Fair and Handsome”. She believes that such messages negatively impact on people, especially the young. WOW has launched an online petition against the “Fair and Handsome” advertisement which promote and support colour prejudices and reinforce the inferiority complex and stigma which persons of colour painfully carry.
India’s obsession with fair skin is a great boost to manufacturers of whitening creams, face cleansers, shower gels etc. In 2010, India’s whitening- cream market was worth 432 million dollars and had an annual growth of 18%. Cricket players and Bollywood stars regularly lend their face and voice to the advertisements for these products. The stand of Nandita Dass is very courageous and praiseworthy. She even added her own slogan to the campaign : “Stay UN – FAIR stay beautiful”. A few other cinema personalities have since enlisted their support. Famous actress and beauty queen, Aishwarya Rai- Bachan, refused to promote the advertisement campaign of L’Oréal and told the media that in India the colour of your skin is too big a problem. Film maker Shekar Kapur ironically commented : “No dark area on any part of the body. Except maybe our hearts. Got a cream for that ?”.
The support and endorsement of the campaign by Bollywood stars, which are usually seen as the paragons of beauty, is indeed an invaluable boon for the campaign.
The colour of skin is a very big problem and a source of distress, unhappiness, discrimination and even ostracism in far too many societies. White is the paradigm of beauty. Dark or black skin does not fit the quasi-hegemonic canon of beauty. Skin colour is a powerful discriminating factor, from birth till death. Friends and relatives rarely miss to comment on the newborn baby’s dark skin, when they bend over to kiss him/her. A bride is first and foremost liked or disliked according to the colour of her skin.
Colour is an indelible mark, it not only gives a person an inferiority or superiority complex but is often like a benchmark which grades people, especially girls and women, socially and culturally. Getting a “good “husband, they say is, dependent on colour skin.
Skin colour is such a powerful social marker that it prevents many of us to go beyond it and look for ethical values, codes of conduct, social behaviour, which make everyone of us either a better or a worse human being.
Critics say that “The Dark is beautiful campaign” will take a long time, if ever, to change ancestral ingrained social and cultural norms, values, attitudes or prejudices. So what ? Gandhi’s 240 mile-long salt march, lasted 24 days and mobilised millions of Indians. At the end of the march, Gandhi picked up a grain of salt. A grain of salt but what an important part of the Indian independence movement. A lesson worth remembering. Big changes often start by small meaningful actions.
India as the rest of the world needs to be more than ever reminded that dark is beautiful. FAIR enough isn’t it ? 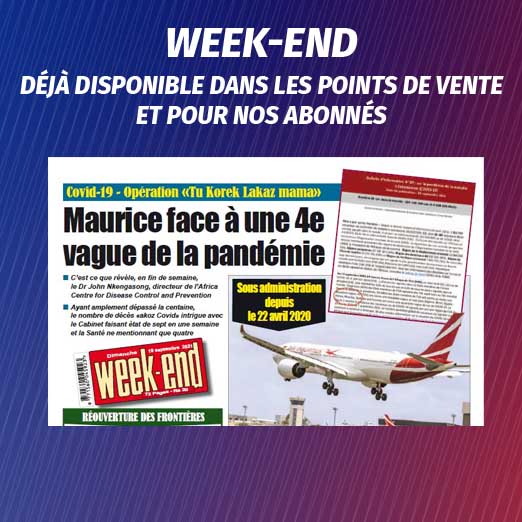