MAURITIANS ON THE MOVE, AMERICAN STYLE: Mauritius IT sector a « success story » 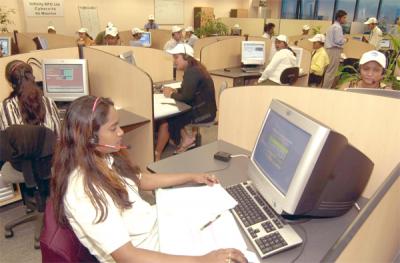 Mauritius has dropped a few slots in the international rankings for information technology, but the island continues to make strides in improving the telecommunications sector and remains the information and communication technology (ICT) leader in the Africa region.
That’s the conclusion of Living in a Hyper-connected World, a new report on worldwide information technology by the Geneva-based World Economic Forum. It was released on April 5 at WEF’s meeting in New York. The Minister of Information and Communication Technology, Tassarajen Pillay Chedumbrum, was present.
Mauritius ranked 53 out of 142 countries in the new assessment, having placed 47th  last year. Sweden secured the top spot, followed by Singapore. The United States ranked 8th and the U.K., 10th.
The report analyzed various aspects of telecommunication development in each country, such as political and regulatory environment, affordability, infrastructure, skills, individual, business and government usage, the economic and social impacts.
The successful development of the island as a hub for information technology in the Indian Ocean region caught the eye of the WEF and led the organization to use Mauritius – as well as Aberjajan – as case studies for the report.
The Making of the Digital Nation: Toward I-Mauritius was written by Krishna Oolun of the Information & Communication Technologies Authority, Suraj Ramgolam, of the National Computer Board, and Vasenden Dorasami of the Ministry of Information and Communication Technology. It outlined the various steps taken in Mauritius to develop the ICT sector and make it globally competitive.
These include liberalization of the telecommunications sector in 2003, the partnership with India in the development of the first Cyber City project in Ebene and legislative reforms to encourage technology advancement. It also mentions the island’s connection to the submarine optical fiber route linking Europe to Asia via South Africa, and development of a National ICT Strategic Plan in 1998.
The ICT sector, the study notes, is well on its way to being an important engine of economic development, along with the tourism and financial sectors. ICT contributed 6.5 percent to the GDP in 2011 and employs some 15,000 people – nearly 5 percent of the total workforce. Employment in this sector is projected to reach 30,000 by 2014.
There is still room for improvement to assure continued growth of the ICT/business processing outsourcing (BPO) sectors, however.
The WEF’s report noted weaknesses in individual and government connectivity (Mauritius ranked 73 out of 142 for individual usage and 52/142 for government) and in IT skill development (63/142). Internet access, however, had a very good rating for affordability (23/142).
Developing skilled « knowledge » workers continues to be a challenge. « Mauritius still suffers from a long response time in building up the human capital required, including the major transformation needed to re-skill workers in the traditional agricultural industry for the emerging sector, » the case study said. Most notably is the resistance of Mauritian workers to accept the demands of round-the-clock schedules required of the international telecommunications field. « These challenges have invariably had a spillover effect on government policies, private-sector strategies and existing institutional arrangements.
The success of this sector will depend on « committed and visionary political leadership that truly believes in the adoption of emerging technologies, » the case study said.
Despite these challenges, Mauritius has the most advanced sector in Africa.
Most countries in sub-Saharan Africa showed significant lags in connectivity due to insufficient development of ICT infrastructure, which remains too costly, and displaying poor skill levels that do not allow for an efficient use of the available technology, the WEF said.
Even in those countries where ICT infrastructure has been improved, ICT-driven impacts on competitiveness and well-being trail behind, resulting in a new digital divide.
The WEF’s report is the most comprehensive and authoritative assessment of the impact of telecommunications on world economies.