On 1st February 2020, Mauritians and the Government of Mauritius will be commemorating the 185th anniversary of the abolition of slavery. During the course of the nineteenth century, the vast majority of the African slaves and Liberated Africans neither returned home nor did they emigrate from Mauritius, as they adopted the colony as their new home. However, during the Age of Indenture, a handful of fortunate Mozambican Liberated Africans were able to leave Mauritian shores for other destinations with one even returning to Mozambique.

Recent research for this article is also showing that between 1871 and 1914, a total of 26 Liberated Africans or just over 1 per cent of the total number who were introduced into Mauritius between 1856 and 1869. More than a dozen Liberated Africans such as Nahallah and David Oodait and Adrian Oodait, his brother, who in 1876 took the bold decision to leave their work as blacksmiths and carpenters on Mauritian sugar estates and went to work on a sugar estate near to the port-town of Natal in South Africa. They belonged to the Yao and were originally from a village near the Lujendra River in north central Mozambique. 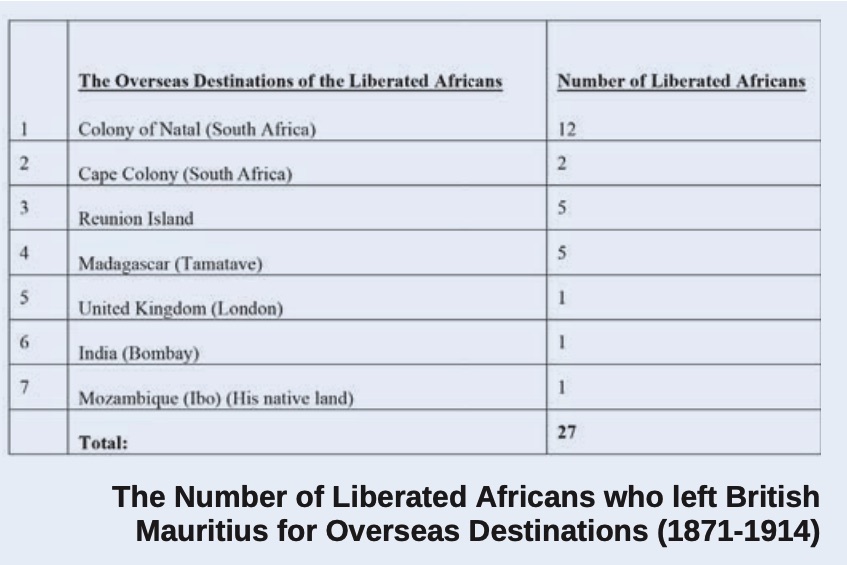 In 1865, they were captured off the coast of Mozambique on a slave vessel heading for Arabia. After spending several weeks in the Seychelles, Nahallah, David, and Adrien Nuhuma were transferred to Mauritius where after spending several years on Mauritian sugar estates where they learned skilled trades such as blacksmiths and carpenters. In July 1876, they decided to emigrate to Natal and left the colony on the ship the Illovo with the approval of the Protector of Immigrants.
In 1876, following a query from the Mauritian Governor, the Protector of Immigrants informed that when he asked the Liberated Africans the reason for their departure, Nahallah, David, and Adrien responded that “they were in search of better wages, living and working conditions”. These are some of the social underclass voices or the voices from the edge of the Mauritius archival records that provide us with some insights into the worldviews and thoughts that guided the actions and human agency of the Liberated Africans.

Furthermore, in a 2002 seminal publication on the Mauritian Liberated Africans, it was observed:

“A group of Liberated Africans were contracted to Natal in 1876, along with a number of other labour immigrants in Mauritius, among whom were numerous Tamils. Natal was developing its sugar industry at this time and skilled workers from Mauritius were at a premium there”.

A few months earlier in 1876, it was a different reason which propelled Songor, the Liberated African, to leave Mauritian shores. In October 1866, James Songor arrived in Mauritius on the ship the Vistula at the age of 26 from the Seychelles. He was a Makua from the village of Naroyo on the shores of the Ruvumu River in north central Mozambique. He was captured on a ship on its way from Ibo to Zanzibar Island by a British Royal Navy vessel and landed in Port Victoria. After having spent several months there Songor was sent to Mauritius along with a small group of around 18 Liberated Africans, 3 males and 15 females. He was engaged as a stone mason for three years to Mr. Huron in Port Louis.
In 1869, he renewed his labour contract and continued to work for the same employer. He resided in Port Louis, got married and had two male children. However, on 27th April 1876 after having spent less than 10 years in Mauritius he paid his passage and that of his family and left the colony on the ship the Canada. His ship was bound for Mozambique Island before going to the island of Ibo and then to his native village in the Mozambican interior. A few days after his departure, the Protector of Immigrants reported that:
“James Songor wanted to return to the land of his ancestors and search for this family and native village.” 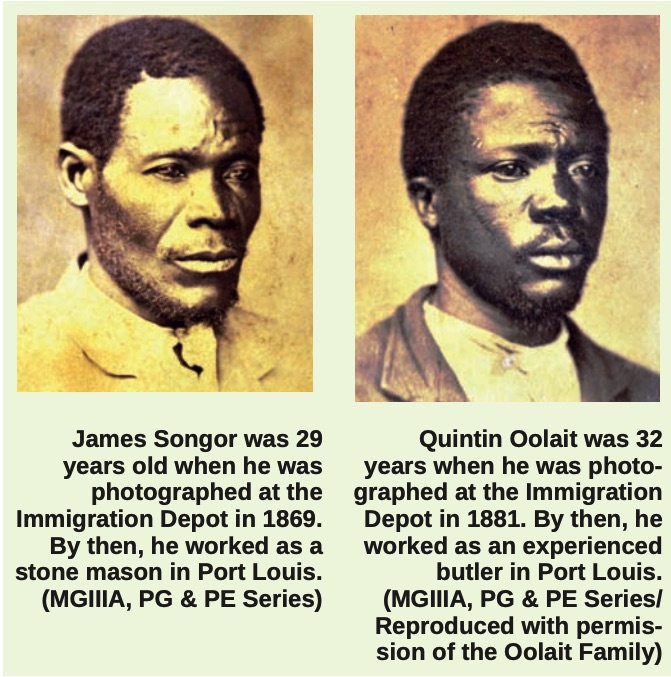 We know nothing of what happened to him after his departure from Mauritius. However, the life history of Songor cannot be overlooked because, so far, he is the only Liberated African out of 2,365 men, women, and children registered as indentured workers at the Immigration Depot during the Age of Indenture who returned to his native land. As a result, James Songor is a clear paradigm of the agency of the Liberated Africans who clearly turned his wish and lofty objective into a reality within less than a decade after leaving Mozambique as an East African slave.

It is also a testimony to the indefatigable determination among many Liberated Africans to forge a new identity and overcome the stigma of slavery. At the same time, quite a contrast to the slavery era, there were 5 Liberated Africans who were able to return to their native lands, while only one was able to do so with his family during the Age of Indenture.

The Yearning of Returning to Africa

Many years before and after the departure of Songor, there were dozens of other Liberated Africans who also wanted to return to the land of their ancestors. This can be seen in the little-known petitions that were submitted in 1851 and 1899 by two small groups of Liberated Africans who belonged to separate generations. In November 1851, Jean and Francois Lily, and around 15 other adult Mozambican Liberated Africans who arrived in the colony more than a decade earlier on the Lily in June 1840 submitted a petition asking for return passage for themselves and their families to Mozambique from where they had been kidnapped and enslaved.

The Protector of Immigrants was asked to look into the matter and reported that the Liberated Africans “had a strong desire to be repatriated to the land of their origin”. However, at the same time, he determined that it would not be possible to repatriate them since they were uncertain of the exact geographical location of their villages in Mozambique. The British Governor declined to provide them with any assistance and warned that they could be resold into slavery once back in Mozambique.
Almost half a century later, in January 1899, Capounanien, Amissa, Matoufa, and ten other Liberated Africans sent a petition addressed to the British Governor in which they asked for a free return passage back to Mozambique. Once again, the Protector was asked to investigate and he instructed his staff to inform the Liberated Africans that only those who knew the exact location their villages and tribes and provide an exact address would be granted a free passage. After a medical examination, the Immigration Depot Medical Officer determined that they would be unable to make the arduous journey as they were also in their seventies and eighties.

Immigrant Songor was fortunate enough to return to the land of his origin, while there were others who yearned to make that once in a lifetime journey, there were other Liberate Africans who emigrated to Natal, and still others who left for other destinations in the Indian Ocean World in search of new social and economic opportunities such as Immigrant Oodait. On 25th March 1861, Quintin Oodait was 12 years old when he was landed from the ship the Sidon and registered at the Immigration Depot as ‘162 African’. He was a Makua and was sent to work as a general servant to Mr.Frouchet, a Franco-Mauritian businessman in Port Louis.

In 1866, Quintin completed his 5-year indenture contract and continued to work for the same employer on successive 12-month contracts. In January 1881, he was photographed at the Immigration Depot at the age of 32. Exactly two years later, in January 1883, he informed Mr. Frouchet of his intention of terminating his engagement with him in order to depart from Mauritius and emigrate to Reunion Island.

On 14th February 1883, at the age of 34, Quintin Oodait left the colony with his wife and three sons. The Protector informed the British Governor that the Liberated African left Mauritius in order to work as a butler in the household of the French Governor in Réunion Island, but more importantly, “he was seeking new and better opportunities for himself and his family”. Quintin Oolait passed away at his residence on a house in the eastern suburb of Saint Denis on 4th June 1912, at the age of 63. In 1921, Jonathan Oolait, Quintin’s youngest son, returned to live and work in Mauritius with his family.

* Research for this article was carried out during the month of June 2019 at the Mauritius Archives, the MGI Archives, and a short oral interview with Jean Mark Oolait, the great great grandson of Immigrant Quintin Oolait and research in the Oolait family papers. 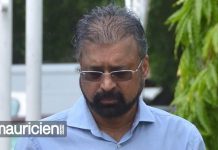 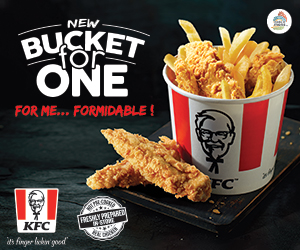