I came to know Sri Rama Ragoonaden, Tamil Teacher at what was then the Goodlands – (now Durgachurn Hurry) Government School when I joined its teaching staff. I was moved to the school in 1960 just after the passage of the terrible hurricane “Carol.” I, for one, was happy to move to Goodlands. It was my hometown.

The school at Goodlands was a big one — almost twice the size of my previous school. But then Goodlands was also a much larger village. As a new member on its staff, I hit it off right away with Sri Rama Ragoonaden, who would later become good friend with me. He would ask me to call him by his nickname “Garçon.” I felt flattered and touched.

“Garçon” had an enticing personality. He was sympathetic and ever jovial, friendly and welcoming. No wonder, everybody liked him at the school.

He was also very witty. Indeed, he would find humour in almost anything and a reason for a laugh. He had a way with creole words and expressions that was just peculiar, colourful and funny. I enjoyed his company.

I would learn some tit-bits of the Tamil language and Dravidian history from him. In fact, I still recall the many outings we went on as a staff. Garçon, who loved a ‘tot’ of rum now and then but never on duty, was at his wittiest, after he had a ‘tot’ or two and was never shy to show off his gifted side – which was his love of music and songs. Often, he would grab a goat-skin ‘drum’ (ravanne), that he played like a pro, and burst into a popular Mauritian sega and sing with gusto while shaking a leg to the delight of every one.

He had a mellifluous voice and was often solicited to sing at (Tamil) weddings and other social gatherings, where he would chant from the Tamil classic Tiruk Kural of Tiru Valluvar and sing popular Tamil songs. Garçon could switch, effortlessly, from the rhythmic beats of the segas to the romantic tunes of popular French crooners of the day like Tino Rossi, Georges Guétary, Luis Mariano and others. Garçon spoke French impeccably and was a very good ballroom dancer. Besides, he was also an avid reader and he read mostly the French classics. In fact, one could say, Garçon was a perfect all-rounder and was always a hit at parties!

Garçon taught Tamil – a language from South India (Tamil Nadu) with a long history going back thousands of years. All Tamils are proud of their Dravidian heritage. A very good example was my friend, Garçon himself, who, despite all the modern and liberal outlooks he displayed, was deep down, a hard-core Tamil speaking Hindu. And, as a teacher of Tamil in Goodlands, where he taught for many years, he, sure, left his mark. His many former students still recall with respect their beloved “Aya Ragoonaden.”

I spent thirteen years at Goodlands and, with the years, my friendship with Garçon grew. I once asked him how he acquired the nickname “Garçon”. He apprised me that he had no idea. All he knew: his folks called him “Garçon,” which was short for “Joli Garçon” (Cute Boy!) “

I must have been a cute baby!” he had chuckled. Garçon, who was always chic in his attire and demeanour, sure, relished his nickname. He considered it a compliment!

Moreover, his personality and civility always shone through everything he did. And, he would have a checkered career before he became a Tamil Teacher. Actually, he had started as a Police Officer in his late teens and then joined the Royal Pioneer Corps and served several years in Egypt. After his stint as a Tamil teacher, he would become, I was told, Librarian at the Royal College of Port Louis. But by then I was already an immigrant in Canada.

I well remember asking Garçon one day: How he got so proficient in the Tamil language as he looked so westernized.

His answer has stayed with me ever since! “

I owe it to my father!” he had said. “My father believed strongly in the importance of preserving one’s cultural heritage. You give up your language and you end up losing your culture. My dad was very right. At home, all my siblings learned Tamil and he also often talked to us about Dravidian history.”

Garçon was a Tamil proud of his heritage. In fact, the Tamils in Mauritius arrived in the colony long before the Indian labourers from northern India. The Tamils came to Mauritius when the island was a French colony known as “Isle de France”. They came mostly from Mahé, Pondicherry and Madras (now Chennai), which were then under French occupation. There were also some Tamil Muslims among them known as Lascars. The bulk of the South Indians worked in the Port Louis harbour, in the shipyard and the docks as artisans, boatmen and seamen. Some of these Tamils workers would eventually become rich and help in the cultural and social rise of their less fortunate fellow Tamils. They would, among others, build the first kovils and temples in the colony.

The indentured workers would not arrive in the island until after the British conquest in 1810 when “Isle de France” became “Mauritius”. The Indian labourers were brought to work in the sugar-cane plantations. They came under contract with the option to stay if they chose to. Many eventually did and settled in the island.

Among the early groups of Tamils to arrive in Mauritius, there was a small elite group, who was educated and rich. They were businessmen (négociants) like the Gujerati Muslim merchants and ran their shops in the same areas in Port Louis, along Farquhar, Corderie, and Louis Pasteur Streets among others. It was in that area that Garçon’s maternal grandfather, Duraisamy Vandayar, and, later, his own father, would have their shops.

Aya Vandayar was, sure, a big shot and Garçon was a descendant of high class orthodox (Tamil) Hindus — the Thondamans. Garçon had spoken to me about the Thondamans, who belonged to a ‘ruling class’ of Tamils and, as such, the Vandayars, the Ragoonadens and others, were looked up to by their peers. Garçon even told me that he remembered well, as a boy, the enormous respect and reverence shown by fellow Tamils to his parents. Some would bow low — even fall to the ground to salute or show reverence to them.

Recently, I received a call from a fellow Mauritian from Toronto, Canada. He wanted to talk to me about an article I had written in Le Mauricien about the play called “BANDHARI” by Assad Bhuglah. And the sympathetic caller apprised me that he had appreciated my article, which had reminded him of his boyhood days in Port Louis where he grew up. And he went on to reminisce about growing up in Port Louis around Corderie and Farquhar Streets where once stood the famous eatery “Hotel Soopie” – that was reputed all over for its delicious Biryani dishes and the famous snack ‘Chicken Cutless’ (Katles Poul), which he relished and still did. He knew the Soopie family well. “We’re like family and were neighbours,” he added.

As we conversed, I discovered that he was the nephew of my good friend Garçon. And he went on to tell me of his maternal great-grand-father, Duraisamy Vandayar, who was Garçon and his own dad’s maternal grand-father.

He also apprised me that Duraisamy Vandayar, the Tamil merchant of Port Louis, whose restored portrait of a painting of him hangs in the gallery of the National History Museum of Mauritius in Mahebourg among an array of (white) elites of the day. Duraisamy Vandayar stands out in that gallery as he is the only Indian to have his portrait displayed in such ‘distinguished’ company. It, sure, tells us something about Vandayar and his family’s status in the Tamil community of Mauritius then. The painting, which is over a century old, was done by one named Gillet and was donated to the Ministry of Arts and Culture by the Ragoonaden family. It has been restored and put on display at the National Historic Museum. (*)

I worked at Goodlands Government School till 1973, when I decided to move to Canada, where I would make my new home. However, I had barely settled down in my adopted land when I learned to my shock that my good friend Sri Rama Ragoonaden a.k.a. Garçon, had suddenly passed away of a heart attack. The year was 1976. He was fifty-one. I was devastated but then such is life – ever unpredictable! I, sure, miss Garçon and his jokes and humour. But I find comfort in the many great memories I have of him. Garçon was, sure, one of kind!

(*) Emmanuel Richon has written an excellent book on the “Portrait of Duraisamy Vandayar”(1998) that is displayed at the Mauritius National History Museum in Mahebourg and in which he also gives some interesting insights into the history of the Tamil community of Mauritius. 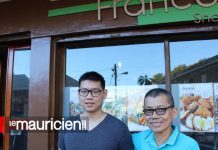 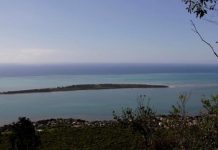