The 145th Heen Foh anniversary is a milestone in the life of the Chinese community. A slice of our life is closely embedded within it, so near and so dear to our hearts. Behind the century-old edifice of Heen Foh Society is inscribed the unspoken but yet glorious history of this institution. It is a story of blood, sweat and tears. It stands still today as a relic of our past, the priceless legacy bequeathed by its Chinese pioneers. It has weathered many an ideological storm and has braved time and space against all odds within the backdrop of the hurly-burly sparked by civil war in China and grafted with Mc Carthy anti-communist propaganda and the harsh colonial repression of the British Government of the day. To be branded as a communist in those days was tantamount to ostracism and entailed enormous problems from the secret police. Noel Marier d’Unienville, NMU, notorious for his most reactionary and inflammatory articles, has labelled Heen Foh as ‘camp d’entraînement’ in Le Cernéen. Today we look back with anger at the hardships and tribulations the pioneers of Heen Foh had suffered unjustly in the hands of reactionary forces of the past. Nevertheless we, a generation of the swinging sixties, immune to the ideological and fratricidal warfare raging at that time, have known the most exalting years of our youth on the Heen Foh (Sin Fa) playground. We were, so to say, the children of Heen Foh.

A generation of baby boomers, we spent days and nights gambolling, playing at all games and socialising in Heen Foh stadium, the cradle of our early childhood and youth, before the advent of television. Private tuition had not yet been institutionalized and cut-throat competition had not yet made its way in the system of education and we were not robbed of the joys of our youth. We exchanged comics like Rodeo, Tarzan and Blek le Roc in the playground. Every day brought something new to us. Amid this atmosphere of joy and revelry, we have grown up to forge our characters and Heen Foh has metamorphosed us into what we are today: resilient, diligent and stoic. Our youth was spent there to our hearts’ delight. Hardly a day went by without marking our presence there. It became the unavoidable meeting place of Chinatown. The indulgent but ailing Fut Pak, the butler, allowed us to play till our shirts were drenched with sweat and our energy almost dead, exhausted at the stroke of midnight. 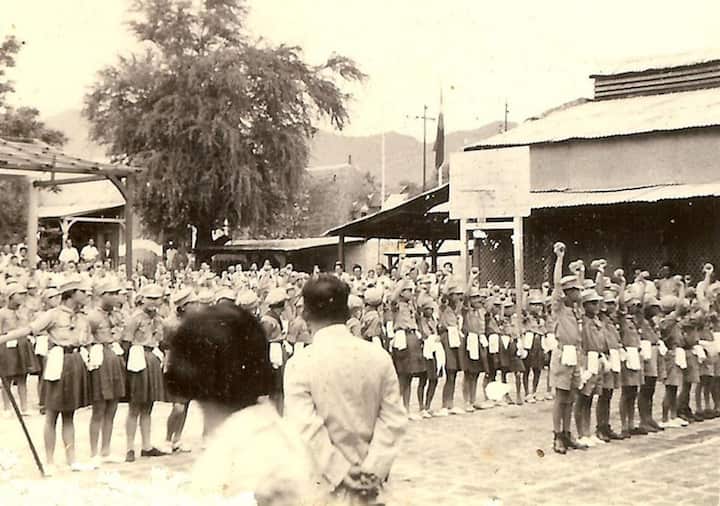 Heen Foh of olden days breathed with life in spite of tumultuous times. It was the birth-place of a wide spectrum of sports activities ranging from basket-ball to weight–lifting long before Ministry of Youth and Sports was created, and it has always been ahead of time (avant-gardist). It bubbled with activities of all sorts and above all it has inculcated in us Chinese values, work ethics and preservation of Chinese culture. Every year as an established tradition, 1st of October marking the proclamation of the People’s Republic of China was a red-letter day for Chinatown and was celebrated with pomp and éclat. The Heen Foh knew great effervescence with activities scheduled for a whole week. Flags were hoisted high, proudly on the mast of several kwons (social clubs) to show their deep attachment to the land of their ancestors. Impressive colourful giant posters of Mao, Karl Marx and Lenin were held high against the walls of the playground and daring speeches with high rhetorics tainted with sarcasm were delivered by eminent personalities. Theatrical plays and Chinese operas were staged to the joy of the older generation. Films were screened in the open air. Chinese traditional instrumental music (pipa and erhu) filled the air with its poignant melodious rhythms evoking with nostalgia the distant land which many had left for better pastures. This added more to the festive atmosphere. This week’s festivities culminated with the palpitating basketball match between Attila and Dragons which always kept the spectators’ breath till the last minute amid thunderous applause and as opening there was a match between two feminine teams, Five Stars and the Chinese Middle School. The stadium was packed tight with spectators, some had to climb up the walls of neighbouring buildings to watch the games. Some shouted till their voice turned hoarse. During the match there was high voltage suspense. In the background hawkers selling mee kao pan vouyen and pickled cucumber were besieged by spectators.

It was a relish for the palates. Those were the days… It was in Heen Foh playground that basketball, volley ball, table tennis and weight lifting were first introduced and then later popularized across the island. It has produced legendary figures like Ah Sow, Tung Kee for basketball and Toro Tan Yan for weight lifting. Sin Chan and his team were scintillating in the firmament of table tennis. Many clubs like Yao Chow, Blue and White, Rovers, Giant, Tiger, Black Hawks were born in those days to vye in the competitions and for our nascent youth to spend their time profitably and enjoyably. There was the Chinese Students Association (CSA) which has left a lasting impression on the spectators because of their blooming youth and indefatigable energy and among them there was a certain Paul Lam Shang Leen. But most of them left for further studies abroad. The basketball referees as Claude Ng Thow Hin, Ah Fock, Raphäel Tang, late Michel Ng Fook Cheong, Li Toon Fong and Relegade Fook Kune have left indelible imprints behind with their spirit of fairness and perspicacity in their arbritration. All these social clubs were situated within the precincts of Heen Foh and on Saturday nights playing cards like rummy, black jack or poker was held among friends to while away the time in an atmosphere of camaraderie. The days of Rock and Roll and twist have not yet made their apparition.

The promotion of Chinese culture came to be the mantra of Heen Foh. The administration of Chinese Middle School was in those days still in the hands of Heen Foh. It has produced illustrious men and women who have helped in the erection of modern Mauritius. Dr. Patrick Chui Wan Cheong (O.B.E), Ng Kwet Chan (poet and writer), Colonel Sui Tit Tong (Xiao Yen Kwong) colonel in the Chinese Army were students of Sin Fah – Chinese Middle School. It was the nursery of hidden talents. A drinking trough, it has inculcated our attachment to Chinese culture. Chineseness became the essence of our existence. It has played a pivotal role in the consolidation of the relationship between People’s Republic of China and Mauritius in the early sixties. It was at Heen Foh that SSR announced as a pledge the Mauritian recognition of China and professed a one China policy. Because of this element never will the giant China forget a dwarf like Mauritius during hard times as a token of gratitude. In the fifties and sixties many students have gone by ships to study in the Middle Kingdom’s universities.

Co-educational system worked marvellously well in Sin Fah amid self-respect and discipline. Moreover, over the years during the nascent times of Chinese immigration Heen Foh has thought it wise to set up a printing press China Times to communicate with laboutik sinwa (Chinese shops) disseminated across the remote parts of the island. China Times has played a major role and it is used to establish a line of communications with shopkeepers as they knew only Chinese language. As a vehicle of communication, it still exists today though the readership has dwindled largely with the ageing population.

Heen Foh has fulfilled its mission (education, culture, social aid, religion and sports) in the social mobility of the Chinese community. All those who have entered the portals of Heen Foh came out strong to lift up the challenges of life and were blessed to serve the country with utmost vigour. It has been the torch bearer of Chinese Culture. Tang xing (Chineseness) became its mantra. It has not neglected the religious aspects as well. The Choy Sheng Pagoda built near the stadium is a testimony of our faith in spirituality and the old Heen Foh pagoda (Guan Pin) found near Caudan roundabout remains a well frequented religious place for the community. It is a place for departed souls to rest in peace. Heen Foh has been visionary in outlook and the early pioneers have rebuilt the community life in Mauritius. They will go down in history as towering figures of the community. On this day of celebration let us ponder over this proverb filled with wisdom: ‘When we drink water, we must always think of its source.’