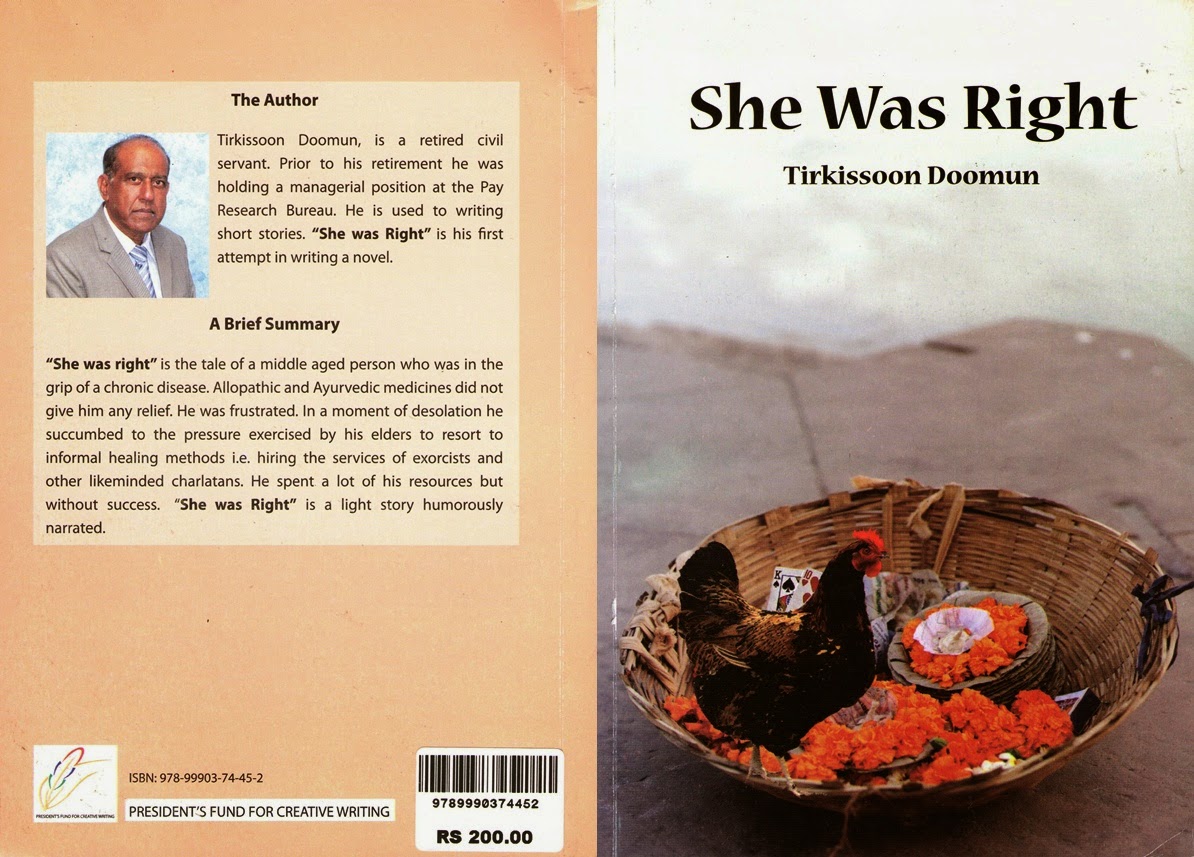 “She Was Right” by Tirkissoon Doomun (President’s Fund for Creative Writing, Ministry of Arts and Culture, 2014, 129 pages) deals with sorcery and exorcism but it isn’t a horror book, it’s rather a man’s desperate attempt at finding a cure for an incurable disease he’s suffering from. In the course of his meetings with a number of healers, we learn how cleverly he’s manipulated to make money from him. What’s interesting is the author’s humorous take on sorcery and exorcism.

The story unfolds in the late 1960s. Tirun, 50, notices bumps appearing on his face. It troubles his mind. We get a variety of perspectives on the odd disease. Some say he needs herbal medicines or tiraita to cleanse his blood; others propose boiling cockroaches and drinking the water in the morning. One person believes Tirun is paying for his past karma while someone else thinks he must have passed out urine under a tree (trees being the abode of ghosts). It’s also gossiped that a malevolent individual has cast an evil eye on him.

The author thus offers us glimpses into a superstitious society. Nothing of what they say is scientific but the ideas may be the manifestation of deep-seated fears and beliefs in the face of an unnatural phenomenon.

All the healers Tirun contacts claim to be professionals and promise to get him well. But none succeeds. It’s clear that the author is taking a dig at them. Tirun suspects they’re money-minded and that they’ve cheated him. But how does a healer go about impressing and persuading a victim of his credibility? The elaborate rites with camphor, vermilion, cloves, nuts, rice, dried chillies and charcoal may simply be a well-planned exercise to entice a victim. He assures the client he has treated more complicated cases successfully. This is to drive home the point that he’s trustworthy. Next, he puts doubts in the client’s mind: someone has buried something harmful in his yard; the vagueness is meant to upset the client. The more he’s upset, the more he’ll need the services of the healer. Telling the client that God has sent him to his doorstep is reassuring, and strongly advising him that rituals must begin immediately, not later, is a sure way to gain his trust.

Such strategies are still in vogue. Not all healers are cheaters. We do have gifted people who ease your back pain for good or who cure your dart, a persistent dry patch of skin, without charging a cent. But other healers turn out to be mere opportunists who are looking for an occasion to make some money by giving the client a false sense of comfort. On the other hand, not every client is necessarily naive or credulous. Sometimes allopathic medicine fails to give the person satisfaction. The person turns to other options out of necessity. His problem is eating his heart away and he badly needs to survive. The author’s stand is against those healers who make tall claims yet are ineffective.

At dusk, Lall, an exorcist, visits Tirun’s place. The latter secretly watches him searching among the flowers. Lall tells him there’s something demonic hidden in the yard and it is the cause of his swellings. He digs around and finds a phial. This, he says, is the culprit. The place from where the phial is located is the place where Tirun had seen him searching. It can’t be a coincidence. Tirun smells something fishy. Quack healers often create a bad situation and lay the blame on another person. It’s a well-known trick.

Later on, Lall advises Tirun to come with a black chick for sacrifice. The latter finds one in the Central Market in Port Louis. In the bus, the konk konk in a plastic bag arouses the curiosity of a child. “Mama poule!” he shouts, with the mother trying hard to calm down his excitement. Passengers find the scene entertaining. We have several typically Mauritian depictions like this in the book. You have a good time, especially during cyclonic weather or national confinement due to coronavirus.

Another scene steeped in our local culture is the garlanding of a goat, with vermilion passed over its forehead, and petals spread over its body. A sacrificial ceremony is taking place. But the animal escapes. It is pursued in the sugarcane field by two men. They catch it, try to drag it back but the goat forcefully resists. The tug of war is amusing for the spectators.

At last, fed up with the inefficient healers, Tirun stops worrying. Gradually, his illness disappears.

The storyline is convincing, we easily identify with the character’s plight, and the themes (money-mindedness, greed, impersonation as healers, exploiting the misfortune of others) are topical. We can also see it as promoting social change.