Tram Will Cut Down Road Fatalities By 20%. Really?

That was on a radio program in the second quarter of 2017 when Sithanen argued against the Lepep tram while Chung defended it. Chung, a senior advisor at the PMO at the time, predicted that the introduction of the tram would slow down the growth of the car pool and reduce road fatalities by 10%-20% every year (save 20-30 lives) which he claimed happened everywhere in the world. Flyovers and a Bus Rapid Transit (BRT) were not options for him. 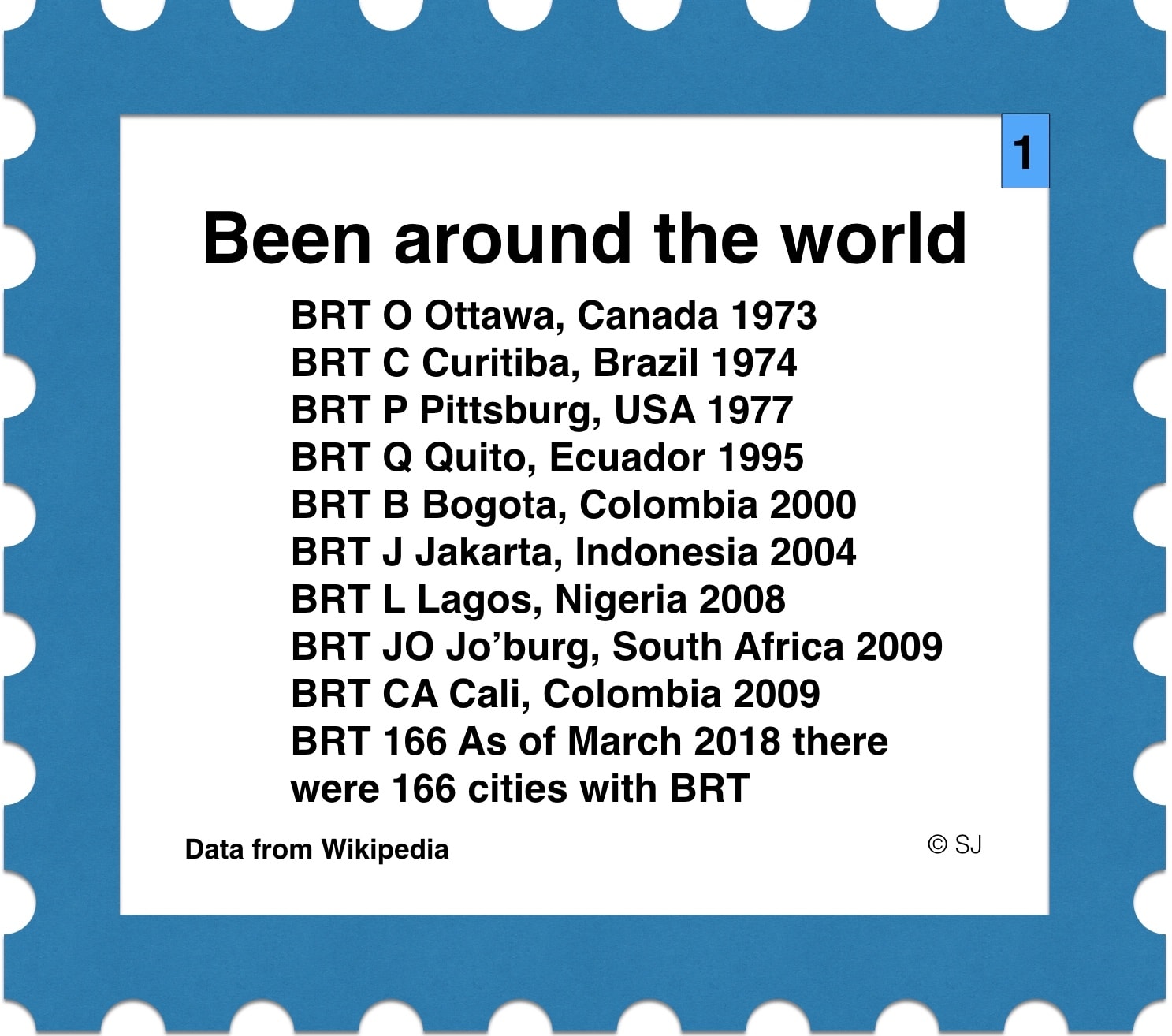 It was kind of surreal to hear a forecast of a big drop in road fatalities in a year when they ended up increasing by 20 compared to 2014 after rising for the previous two years partly because of the scrapping of the point system. Besides we know that rail transportation doesn’t automatically reduce road deaths. We can look at Sweden, a road-safety champ, which saw its rate of road fatalities double in the two decades following the 1950 launch of its heavy metro system.

In Singapore road deaths increased by 21 or 10.2% in 1988 or one year after the start of its metro and kept going up the following three years. The situation was not a lot different after it rolled out its LRT twelve years later, which we call Metro Express here. Indeed fatalities rose in 6 of the first 10 years of its operations. It’s also important to note that the car pool there more than doubled in size between 1987 and 2007 which is the period in which the two rail systems were added. That’s about a 20% faster percentage rise compared to the 1967-1987 period.

For Sithanen, traffic congestion was essentially about getting into the capital. That was a bad start as traffic had become a major headache almost everywhere. He proposed the same three solutions that he says Bodha advocated before June 2016 namely accelerating the road decongestion program (RDP), flexitime and decentralisation. And if these didn’t work he suggested going for the Bus Rapid Transit (BRT).

You Can’t Build Your Way Out of Congestion

More roads are not really a solution because they go against the fundamental truth that « you can’t build your way out of congestion ». We’ve experienced this several times. Build new roads, flyovers, other gimmicks and all you get is a little reprieve before the traffic Frankenstein returns with a vengeance. Plus they exact far too heavy a cost on the environment, our national heritage and us. Flexitime should definitely be part of any solution we implement as must decentralisation. He was against the tram because it would be a financial disaster which would saddle future generations with debt – a funny thing for him to say when we know that his flat tax has caused a government revenue shortfall that would have fully paid for at least one tram every year for the past seven years.

But this immediately begs the question of why he didn’t implement flexitime or decentralisation when he was the Finance Minister (FM) on two different occasions fourteen years apart for a total of almost ten years. Especially between 2005 and 2010 when traffic had become a top problem. It’s true he was very busy during his last stint pushing public finances over a cliff and killing a savings culture that had survived at least three intense cyclones. It’s also true that his three solutions would collectively not have solved the traffic problem while a simple analysis should have made a strong case for the adoption of the BRT.

BRT Has Been Around For a Long Time

The first BRT was implemented around the first oil shock and the second a year later in the Brazilian city of Curitiba, the name that springs to mind when you think of this mass transit system (see 1 which doubles up as a legend for 2). Lagos and Jo’burg got theirs a decade ago while as of March of last year 166 cities had one. Even if he hadn’t introduced the BRT one well-known fact – the number of people traveling alone in their cars – and keeping an eye on the number of cars and buses would have pointed to a path that’s natural for us. Especially if the last two numbers are combined into a ratio that’s as important as our fertility ratio used to be sixty years ago. 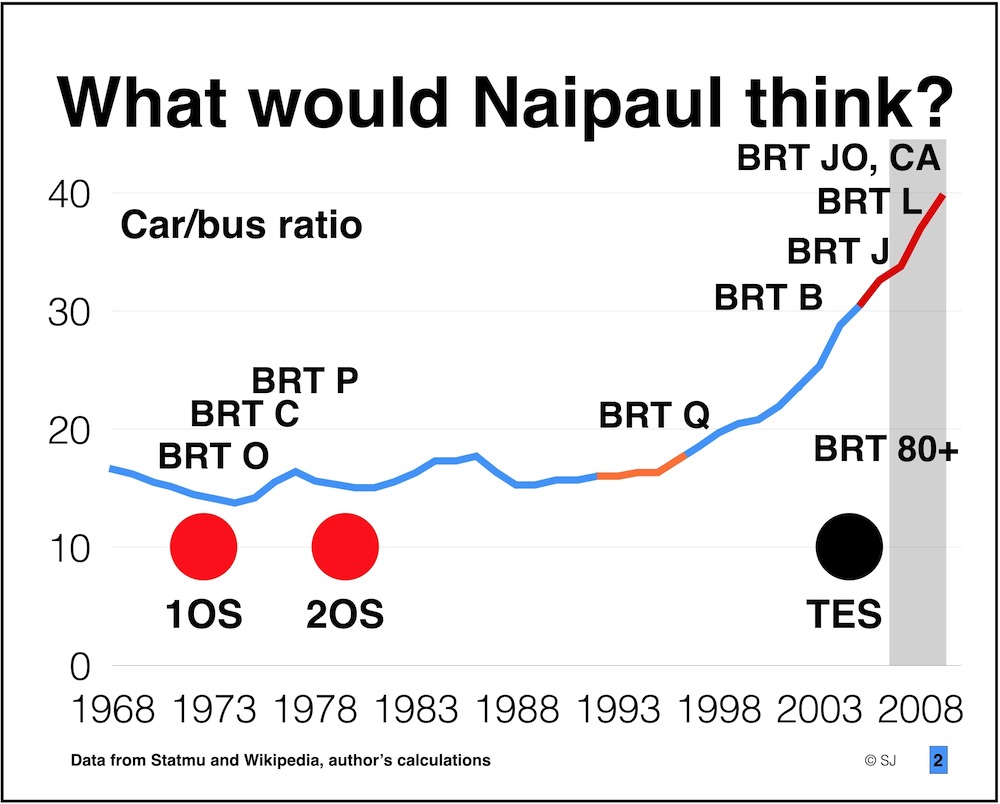 The first thing to note in Chart 2 is that the car/bus ratio stayed within a narrow range for three decades. Worthy of note are the drops in the ratio in response to two oil shocks (OS) – the increase in the number of buses on our roads between 1973 and 1974 was larger than the one over the preceding six years. In fact, we had to wait for 1999 for this ratio to cross 20. Ironically it underwent a significant deterioration during the big contraction in the textile industry in an environment of skyrocketing oil prices — these include the years when Bérenger dubbed our republic the best managed country in the world.

Even funnier is what happened after July 2005. See, the bean-counter told us we were facing Triple External Shocks (TES) with one of them being high oil prices. The least you would have expected him to do then for consistency sake was to tweak policies so we end up with a ratio that didn’t deteriorate. That didn’t happen. The same nonsense occured during the 18-month Great Recession shown in grey. Overall, for every bus added to our transportation network during his second stint as FM there were 128 more cars (up from roughly 21 during his first term) causing that ratio to hit 40 by 2009. 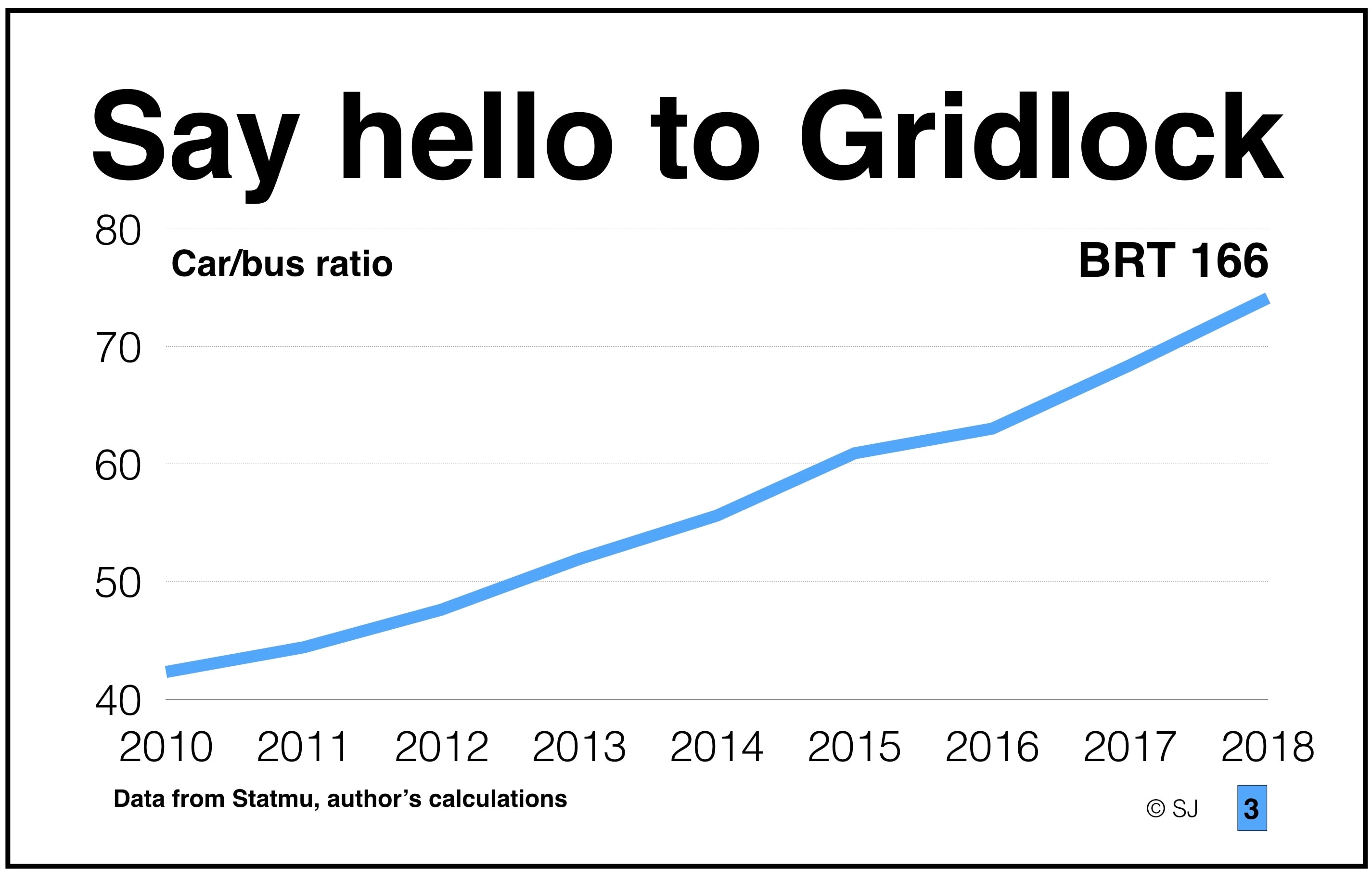 Nightmare Gets a Lot Scarier

The ratio has kept rising over the following eight years reaching 74 at the end of 2018 – in effect doubling over one decade and quadrupling over roughly two – and indirectly contributing to the loss of lives in the 2013 floods and directly causing many road fatalities. The deteriorating ratio is not simply the effect of higher incomes. It is mostly a sign of ferocious stupidity because cars stay idle on average about 95% of the time (reinventingparking.com), eats up about 12% of the space of cities, damages our competitiveness and causes a host of other problems. Its growth has been left unchecked for way too long causing a lot of things to go out of sync. Is it a surprise when we didn’t have a Ministry of Plan for at least as long as we’ve mistaken the economy for a golden calf?

We’ll enjoy the free rides on the Urbos for a month but traffic congestion doesn’t really improve everywhere else. The free rides stop and the traffic Frankenstein experiences another growth spurt. We then realise the tram doesn’t solve anything – putting it on stilts is no better. Then a harrowing conclusion. Promenade Roland Armand and so many other landmarks were destroyed for absolutely no good reason at all.

Government will then do something it should have done a long time before the groundbreaking ceremony for this new mode of transport: get radical with the growth of the car pool so as to be more gentle towards the environment. The earlier cars are declared public enemy No. 1 the sooner we’ll collectively get to work to bring down the car/bus ratio to a healthier 35 – like by adding 1,000 buses and taking 94,000 cars off the road – and proclaim a first city car-free. This should take us about a decade. To help us avoid concrete « min-Apolo » and other eyesores. And regain our status as an overcrowded barracoon.