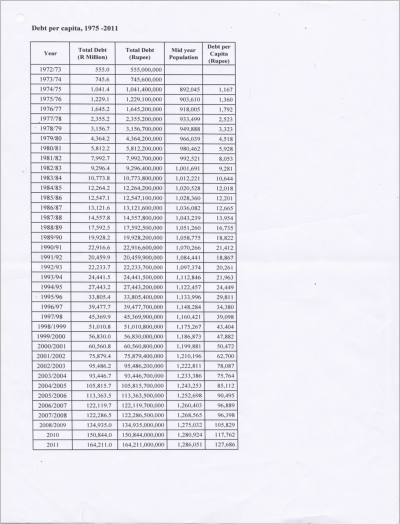 Just as the mirror and history, official facts and figures-about public expenditure and outstanding heavy debts-cannot lie. This second article is but another wake-up call about the appalling debt crisis : Because we have dangerously mortgaged the future of our innocent grandchildren-after our deaths. And allowed corruption to further bleed the economy dry. Bankrupt Greece is staring us in the face ! It’s an organized crime to force future generations to pay off our huge debts !
Consider but a few 21st May 1981 National Assembly statements of mine-which are still relevant today. HANSARD PAGES 1937 & 1938 :
“…. Government should move away from the mere mathematical function of spending money and should concentrate on the value of money….. It’s not a question of how much cash is poured out…. The real issue is what value the country is getting from its expenditure….”
Now, summon the courage to learn how and why sacred taxpayers’ money is spent, wasted or diverted by all successive governments. Mark my words : The refrain will be the same on 9th Nov-when the national budget will be presented. LESSONS OF HISTORY ? THE BIGGER THE EXPENSES AND THE DEBTS-ALL THE MORE THRIVING WILL BE THE CORRUPTION VIRUS.
For the last seven years, Navin Ramgoolam is in power. In 2006, total expenditure stood at Rs 48 billion 875m. National debt landed at Rs 113 billion 363m. With a population of 1 million 252,698-the debt per person amounted to Rs 90,495.
We’ve paid off as interest Rs75 billion 114m for last six years
Five years later, in 2011, figures for total expenditure indicate some Rs 79 billion 570m. Total debt reached the astronomical and frightening sum of Rs 164 billion 211 million. For a population of 1 million 286,051–the debt per inhabitant was Rs 127,686 !
Which means that between 2005 and 2011, the Navin Ramgoolam government has increased the national debt by some Rs 59 billion. Per capita debt is on the rise by Rs 42,574. DEBTS HAVE GONE VIRUS !
THEREFORE : Make no mistake. Our country is burdened with huge debts. Each and every incoming government has saddled the population with heavy debts. We are living on borrowed money.
We’ve already hired out or jeopardized future generations. On bended knee ! They’ll be called on to pay off our debts. For sure, we’ve mortgaged their future. True, some fierce critics will advance that our borrowing powers are strong. Ask them why white-collar corruption has increased a thousandfold these days. Question them how past and present Ministers have made billions. And overnight created money-making empires worth Rs8 billion !
Here comes the rub if not the dreadful Frankenstein’s monster. Debt servicing in 2000 amounted to Rs 10 billion 235m. That’s only the interest we’ve paid. The figures from 2007 to 2011 are as follows :-
(PERIOD) 2006/2007  —-  (INTEREST PAID) 12 billion 542m
(PERIOD) 2007/2008 —- (INTEREST PAID) 13 billion 268m
(PERIOD) 2008/2009  —-  (INTEREST PAID) 14 billion 197m
(PERIOD) Jul – Dec 2009 —- (INTEREST PAID) 6 billion 609m
(PERIOD) Jan – Dec 2010 —-  (INTEREST PAID) 14 billion 291m
(PERIOD) Jan – Dec 2011 —- (INTEREST PAID) 14 billion 207m
SO : In all, we’ve paid interest only Rs 75 billion 114m. Charged guilty in the dock are all successive governments. When the Opposition points the accusing finger of blame, shame and suspicion, they often forget that three of their own fingers are looking at them.
All told, huge debts are contracted and prestigious economic infrastructure is the order of the day for a specific purpose. Should I tell you the real reason behind all that massive spending ? Just think of the identity card saga ! Had it been in India or any other European country, for certain the Supreme Court would have convened the decision-makers for an explanation. Flashing through my mind is the unlimited vast Sun Trust empire.
By the way, no self-respecting Indian judge never ever goes to a cultural or religious function to rub shoulders with Ministers and other politicians in power. Does it happen in Mauritius ?
Highly infectious borrowing culture
And then, should I withdraw any word from my National Assembly’s statements of 21st May 1981-as reproduced above ? After 31 years ? Questions remain the same : SHOULD WE MORTGAGE THE NATION’S FUTURE ? AND TURN THE COUNTRY INTO A COLONY OF FOREIGN LENDERS ? WHITHER ECONOMIC INDEPENDENCE ?
Watch out, the begging and mortgaging spree will soon turn our country into another bankrupt Greece. All incoming governments get contaminated by that corporate culture. You know the real reason. Do not forget : “la caque sent toujours le hareng”.
Which all reminds me of a funny but legendary African proverb : “…. If you go to a country where all the people are dancing on one leg, never ever make the mistake of dancing on your two legs. Sooner or later, they’ll cut one….”
SO : One and all will perpetuate the highly infectious borrowing culture. For obvious reasons ! Another long-standing tradition : No politician will ever be brought to justice. Only fools will believe in politicians who threaten to hold a judicial inquiry into the ill-gotten wealth of other politicians. Remember : All come from the same political womb !
And finally, there could be a few mistakes, here and there as I am not good at maths. However, you may rest assured that all the relevant information is genuine from STATISTICS MAURITIUS. We have sounded the burglar alarm on the debt crisis. The table below speaks volumes. Little wonder, you can be your own judge !
End of Part 5
Facebook