Africa Day, celebrated on 25th of May around the theme ‘Arts, Culture and Heritage: Levers for building the Africa We Want’ was perhaps an opportunity to think of the interface between the Culture Industry and the economics of the Mauritius-Africa strategy. But this did not happen. The idea of a Mauritius-Africa strategy as a pillar of economic development was first referred to in Budget 2013, and since, every single budget has referred to the Africa strategy as an avenue for Mauritius to grow its economy. The question that we pose however is: can Mauritius make a success of the Africa Strategy and build the ‘Africa We Want’ without africanising the Mauritian mind, developing an emotional bond and strengthening cultural linkages with the continent.  The simple answer is No! Despite the fact that a segment of our ancestry is from the continent and that we form part of regional blocks such as SADC, COMESA and that we are a full-fledged member of the African Union, many Mauritians reject their African identity and still look at Africa with Afro-pessimist lenses.

In last year’s budget 2020/2021, under the heading “Africa”, the Minister of Finance states the following at paragraphs 135 : Africa is our Future.

136 : It is hand in hand that our socio-economic pathway will be written.

137 : Our Economic Recovery plan thus also focuses on reinforcing our partnerships with the rest of Africa.

138 : The MIC has earmarked Rs 10 billion to invest in African projects, including SEZ projects under a G2G framework.

And in the concluding note at paragraph 379, he states:

‘We are creating a new synergy with Africa, the cradle of humanity and for which our sense of belonging is so strong.’

Creating a new synergy with Africa and talking about our belonging to the continent as being strong, would be void of sense, unless we understand and appreciate the cultures of Africa. Are we doing enough on this score?

Budget 2014/2015 at paragraph 163 also tells us about an ‘Africa Centre of Excellence’. The paragraph notes:

« The Africa Centre of Excellence will actively promote the placement of our young technicians, graduates and professionals on the continent. It will identify employment opportunities, seek collaboration with local counterparts, promote mutual recognition of qualifications, draw up shortlists of candidates and facilitate interviews. »

One is entitled to ask where is this Africa Centre of Excellence? Does it have scope for the enlargement of African Arts and Culture and in so doing allow our young people to exploit their potential within the cultural industry. Paragraph 167 notes:

“Never before has so much been done to build such strong bridges between our island and the rising giant that is Africa.”

Strong bridges can only be strengthened when there is sharing, equitable partnerships, solidarity and respect. In short, UBUNTU should prevail; more so now that the Covid-19 pandemic is causing so much suffering across the continent.

The average Mauritian knows very little if at all about Africa. Many of them treat a continent grouping some 54 countries with different cultures, traditions, history, languages, political systems, geographies as if they were one homogeneous, monolithic block. The continent’s diversity remains unknown to many, and yet it is well established that doing business in the modern world requires that cultures are well understood and appreciated.

While Africa with a market of some 1.2 billion represents a huge market that the whole world wants to tap into; the chance of Mauritius taking a reasonable slice of that market, within the reconfigured globalization and multilateral set-up remains rather thin. The potential of the Mauritius-Africa strategy will remain suboptimal, unless the cultural industry is plugged in. And for that to happen, we need to ensure that the Ministry of Arts and Cultural Heritage becomes Africa-centric. It should perhaps have a portal for African culture on its official website. At the moment, on its home page, under the heading Cultural Exchange, all it has is as follows: « Commemoration of the 186th anniversary of the arrival of indentured labourers, Divali 2020, Music day 2020, Art in the city and Ebooks.” Nothing on Africa! On the other hand, the Nelson Mandela Centre for African and Creole Culture has as its main objective: “to preserve and promote African arts and culture.” But it still has a lot more to do on this. For now, the website is not even functioning, thus making the work of researchers and artists on Africa very difficult. 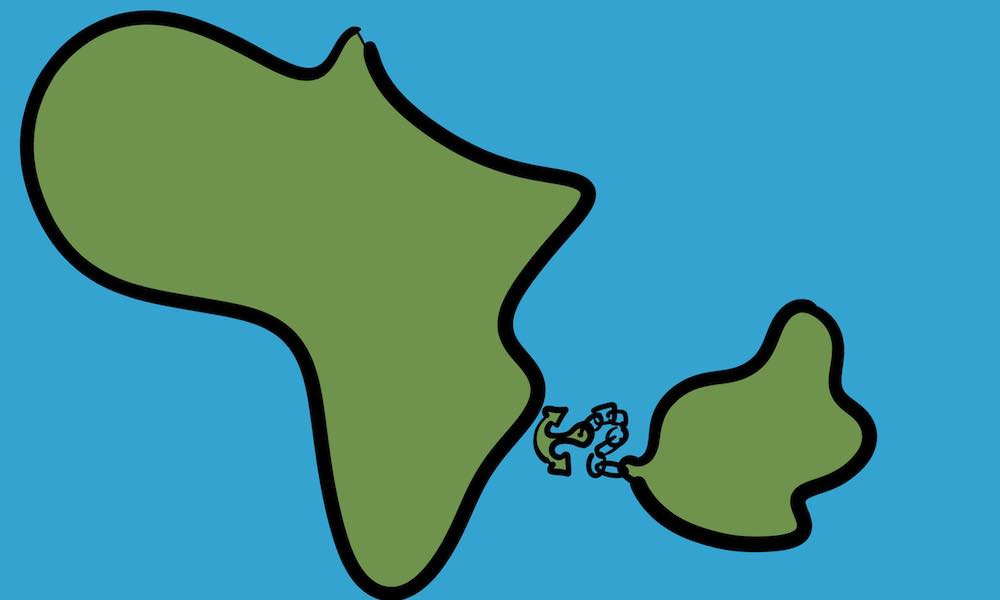 It is however commendable that the Nelson Mandela Centre celebrated Africa day 2021 around the theme ‘Lafrik Dan Mwa’. But sadly the programs were restricted to the Senn Kreol, MBC 1 and on social media.  Promotion of African culture cannot be done only on one day or over a week. Therefore, on-going programmes and a number of activities should be introduced with more involvement of the Ministry of Arts and Cultural Heritage.

Another major avenue to africanise the Mauritian mind is the education sector. We shall soon be celebrating 54 years of Independence, but we still have a long way to go to decolonize our educational curricula and move away from Eurocentric knowledge systems. Adopting an Africa-centric perspective could assist in consolidating the interface between the economics of the Mauritius-Africa strategy and the culture industry. Just a few examples can be food for thought.

Fashion and fabrics is a subject taught at our schools. But do our students and potential entrepreneurs know about the richness of African cotton and prints and the history of the African fashion industry. For Africa Day 2021, Gabriel Froid, a Mauritian fashion designer and creator of the brand African Marquis rightly argued that African wax prints “…pa inkli dan nou kod vestimanter day to day setadir nou pa pou trouve enn dimounn pou met enn kostim Afriken pe al dan enn biro….”. He also adds : «… met nou dan enn sertenn moul kot pou fer nou konpran ki sa bann tisi la se pa vreman enn fason abiye… » Some politicians, on the occasion of certain African related events, choose to wear an African shirt or dress. But a one-day gear is certainly not enough to understand and communicate that each African print has a symbolism and history of its own.

Other interesting school subjects opening the way for a better understanding of African Culture include home economics and food and nutrition among others but what do Mauritian students know of “Jollof Rice, Egusi soup, fried plantains, Fufu, ogbono, okra, and Ugali…”. The richness and diversity of African cuisine is still very alien to a vast number of Mauritians. Italian, Chinese, Thai, Indian restaurants exist in Mauritius allowing Mauritians to experience a multiplicity of cuisines but when shall we find an African restaurant on Mauritian soil?

Needless to say that the African music industry with some well-known artists such as Salif Keita, Angélique Kidjo, Youssou N’Dour, Brenda Fassie, is huge. This industry also represents a huge entry point for our Mauritian artists. Jean-Francois Chaumière, on the occasion of Africa Day 2020 celebration tells us that our artists “…..pe veikil sa patrimwann Afriken la a traver zot Art…..” but isn’t it time to create honest economic opportunities built on our African heritage for our artists while they are still waiting for the ‘Status of the Artist Bill’? Art is not restricted to music. African cinema also holds a lot of potential for our young people who are wanting to innovate and show their creativity. It is perhaps time for all relevant stakeholders to find ways to connect Mauritian talent to African cinema. Having an African Film Festival once a year remains insufficient!

Perhaps, part of the Rs 10 billion earmarked by the Mauritius Investment Corporation (MIC) to invest in African projects, as per paragraph 138 of last year’s budget 2020/2021, should be rolled out to the Culture Industry. It is only then that the African Continental Free Trade Area will become meaningful.