“The workers of the world will never relent in their struggle against the capitalist system which is exploiting and dehumanising them.
They will be determined and defiant in order to secure their rights.”
Karl Marx, Das Kapital, Vol 1.

The first of May or Labour Day is when the Mauritian nation remembers the great contribution of the Mauritian workers in making our island a prosperous, multi-ethnic, and democratic republic which serves as a shining beacon to the rest of the world. During the late 1930s and the early 1940s, many years before Labour Day became an official holiday on 1st May 1950, it was celebrated annually by thousands of Mauritian workers in Port Louis. However, the genesis of the struggle and resistance of the Indian, non-Indian, and Mauritian workers did not start during the 1930s, but rather fifty to seventy-five years earlier, during the second half of the nineteenth century.

The Resistance of the Workers between the 1860s and 1880s

Between the 1860s and the 1880s, the indentured and ex-indentured Indian, non-Indian, and Mauritian labourers openly resisted and challenged the colony’s draconian labour laws, their inhumane living and working conditions and the arbitrary authority of colonial officials on the sugar estates, in Port Louis, the emerging towns, and villages. This fact can clearly be seen through their effective use of the law, the tens of thousands of complaints they lodged with the Stipendiary Magistrates against their employers, and the tens of thousands of workers who left their place of work without permission for several days. 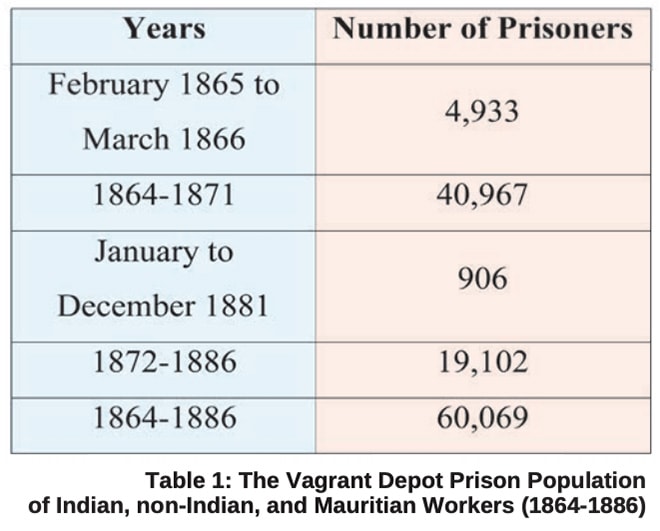 Between 1860 and 1886, the indentured and ex-indentured Indian, non-Indian, and Mauritian workers filed 110,940 complaints, or annual average of 4266 complaints, against their employers in the district courts and Port Louis. Around 72% of these complaints concerned non-payment of wages with a conviction rate of 71% of these cases. The rest or around 28% of the complaints of the workers dealt with such grievances as poor working and living conditions, ill-treatment by the employers and the practice of the double cut system among several others. Among these workers, there were hundreds of poor Asian, African, and European free passengers who reached Mauritian shores between the 1850s and 1870s. 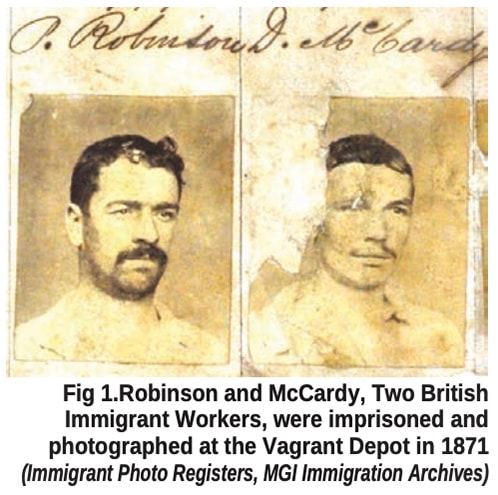 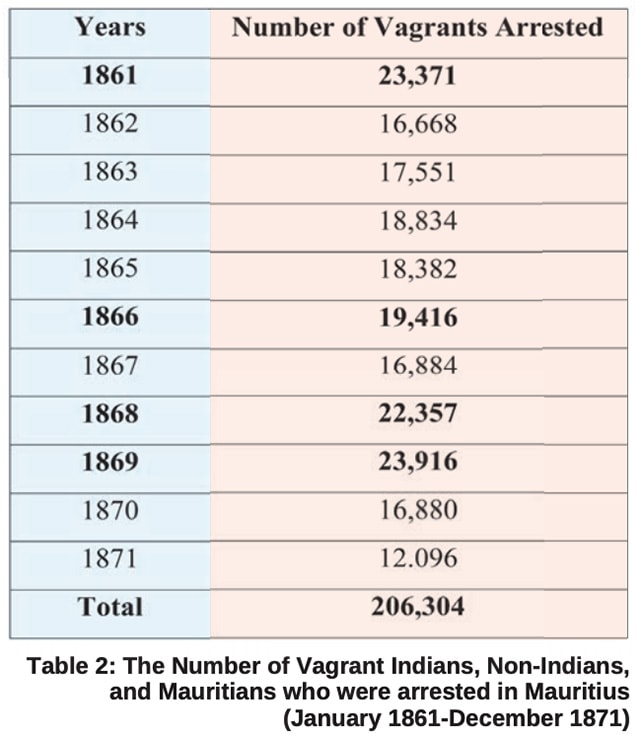 Therefore, between the 1860s and 1880s, there were tens of thousands of Indian, non-Indian, and some Mauritian workers who absented themselves illegally from their work or just deserted or escaped from the sugar estate where they worked and lived. The aforementioned figures do not include the estimated more than 206,000 workers who were arrested for vagrancy between 1861 and 1871, or over a period of 11 years, which gives an annual average of 18,700 vagrants.

In addition, illegal absence and desertion were often seen by colonial officials as being the same offense or crime as vagrancy. After all, when Indian, non-Indian, and Mauritian labourers resorted to such tactics of resistance as employees, they were denying their labour to their employees. In the process, this posed a threat to the colony’s economic activities such as sugar cultivation and manufacturing, other agricultural activities, port activities, colonial government services, and the construction and maintenance of public works.

Richard Allen, an American social historian, provides another set of statistics which, to a certain extent, can be seen as a form of resistance or refusal on the part of the labourers to continue working on the sugar estates, Port Louis, and the colony’s emerging towns and villages. Between the early 1860s, the annual average number of contracts signed by the workers amounted to 72,960. During the late 1880s, the number of contracts being signed on sugar estates declined to an annual average of 42,632. This shows that within less than three decades, there was a decline of more than 58%.

The period between the 1860s and 1880s was an important era of social and economic transition in colonial Mauritius which saw the gradual decline of the importance of indentured immigration, the end of the Mauritian sugar boom or sugar revolution, the centralization of the sugar industry and a restructuring of the Mauritian economy and workforce. The labour force on the sugar estates and elsewhere in the colony also became more stable as the Indian, non-Indian, and some Mauritian labourers continued working for the same employers. During this period, an ever increasing number of Indo-Mauritians also joined the colony’s workforce.

The number of Indian, non-Indian, and Mauritian labourers who were arrested for vagrancy, desertion and illegal absence declined sharply as well as the number of workers who escaped was reduced. There was a general decline in the number of complaints which employers and employees filed against one another before the Stipendiary Magistrates.
Between the early 1860s and late 1880s, the sharp decrease in the number of cases of vagrancy, desertion and illegal absence can also be explained through the fact that the number of Indian, non-Indian, and Mauritian labourers who signed labour contracts on the sugar estates and elsewhere gradually declined. At the same time, there were tens of thousands of workers who left the sugar estates and went to settle in the villages, towns and Port Louis. Many among them became gardeners, hawkers, independent cultivators, small planters, shop keepers, small merchants and traders allowed them to carve an important place for themselves in Mauritian colonial society.
In conclusion, the names of the tens of thousands of Indian, non-Indian, and Mauritian labourers and their struggles and resistance between the 1860s and 1880s must forever be engraved in our hearts and etched in our minds and in the process become an integral part of our national memory. Today, the Mauritian nation owes a great debt to these pioneering and valiant workers who paved the way for the struggles and resistance of the modern Mauritian working class of the 1930s and 1940s thus, we have a “devoir de mémoire” to honor them on the First of May. 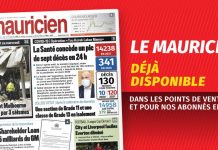 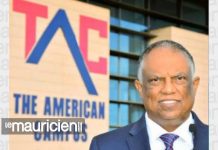 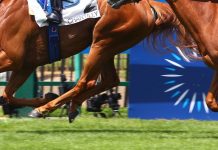