The Constitution is the Supreme law of our country. As such, one would expect constitutional cases to be ‘first among equals’, and be afforded a privileged treatment. Such is unfortunately not the case. Our system is still not equipped to treat them with the expected deference. It is time to change this state of affairs, by easing access to constitutional justice.

Creation of a Constitutional Division

These were the Family, Commercial, Land, and Financial Crimes Divisions. The first two divisions had already been de facto operational since 2008 and 2009 respectively, having been set up administratively by the then Chief Justice. Additionally, the Mediation Division was created in 2010.

It is widely recognised that these new divisions have streamlined and fast-tracked cases falling under their ambit. They have also, over time, created a body of judges who have acquired specialised skills. All said and done, they have improved the lives of litigants and legal practitioners alike. There is therefore no reason why constitutional matters should not receive the same treatment, and be ascribed a dedicated division.

Extending the Time-Limit for Relief

A citizen who alleges that his constitutional right has been, is or is likely to be contravened may seek redress before the Supreme Court by way of a plaint with summons. In order to do so, he should observe a strict time-limit. The Constitution empowers the Chief Justice, and not the Legislature, to fix such time-limit. 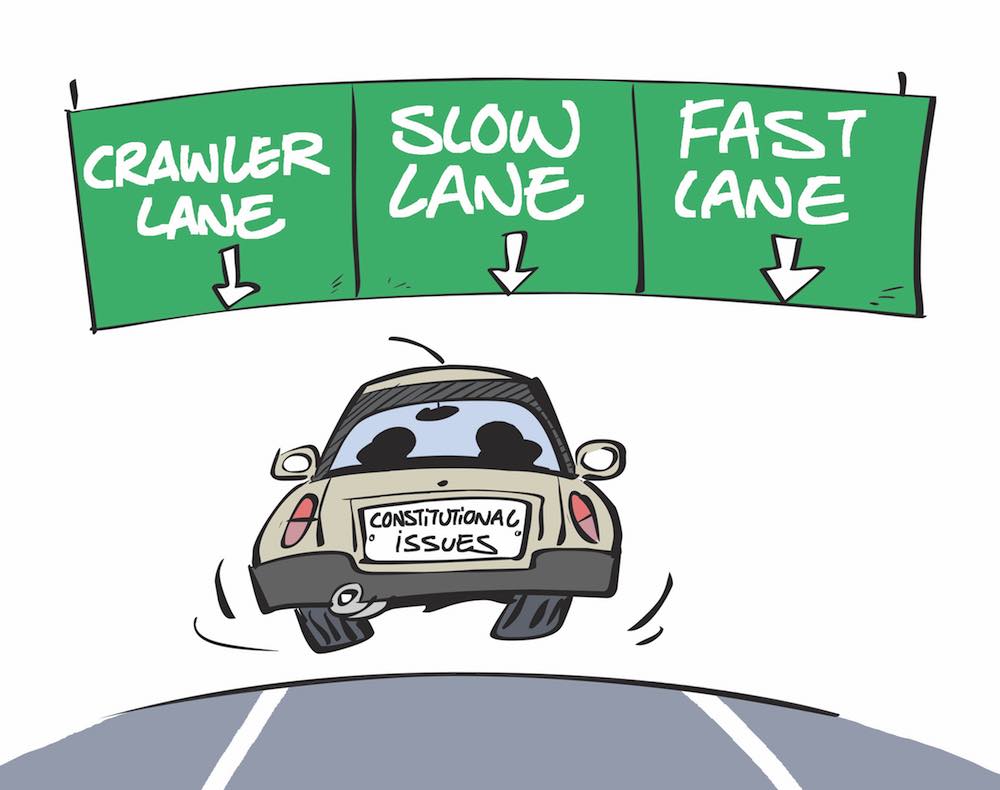 In 2000, the then Chief Justice had, by virtue of the Constitutional Relief Rules, set the limit to 3 months. In so doing, he had reduced the previous time-limit of 6 months to 3 months.

This overly restrictive time-limit operates unfairly against the citizen. It is inconceivable that an aggrieved party should be unduly pressed for time when it comes to vindicating his fundamental rights. In order to alleviate the harshness of the existing Relief Rules, the Chief Justice is urged to restore the 6 months’ time-limit.

The Supreme Court has a dual role in constitutional matters. First, it can make a declaration in any application by any person to determine whether any provision relating to his fundamental rights has been contravened. Secondly, it can determine the conformity of any legislation with the Constitution. In both cases, its role is to construe the law in the way most conducive to give full force and effect to human rights and freedoms.

It offends common sense to, on the one hand, impose a strict time limit on an aggrieved party to lodge his case; whilst, on the other hand, allowing the case to then drag on over several years before its final determination. There is an added danger that issues may cease to be live by the time the matter is finally heard by the court. It is therefore suggested that constitutional matters should be fast tracked to be completed within a specified time-limit of, say, one year – so as to satisfy the requirement of a trial within a reasonable time.

It is thus proposed that pleadings be exchanged within mandatory time-limits, witnesses’ statements be adopted, and factual issues be narrowed down as far as possible. Finally, written submissions should meaningfully supplement oral submissions in court.

It is perfectly understandable that a case that falls foul of procedural requirements should be thrown out. However, there are other cases where the court has rejected an application on the ground that there is no ‘live issue’ before it; for instance, because the plaintiff is no more affected by the complained act, such that the issue has become ‘academic’.

It is submitted that there may, in exceptional cases, be a good reason in the public interest for the court to use its discretion to hear a matter although it has  become  academic. This discretion was exercised favourably in the recent case of Vimalen Reddi v. Ministry of Health, where the appellate court pronounced itself on an academic question, and reversed the decision of a Judge in Chambers who had declined to hear an urgent application on the ground that he allegedly had no jurisdiction to do so.

It is suggested that judicial activism should be the norm in constitutional matters, since no issue can be said to be strictly academic here. The constitutional court should be able to pronounce itself on a matter of great public importance, whether academic or not, because its primordial role is to interpret the Constitution, and to make a declaration that would set a precedent for posterity. Incidentally, this is precisely what the Conseil constitutionnel systematically does in France.