I have lived with legends, but there was and there will never be a legend like Dilip Kumar.[Ali Peter John 1.]

News that the thespian had breathed his last reached me on Wednesday. I could not help feeling sad like many other people. With the passage of time, Dilip Kumar had become part of my psyche. I recalled the magnetic personality he exuded on celluloid, the expectations the release of his films gave rise to and those glorious hours I spent in the obscurity of cinema halls trying to commune with him. It was a treat to watch him enact the persona of characters. While giving expression to his talent he added a touch of reality to them.

In moments of loneliness I have many a time remembered the songs picturised on him which I have also appreciated for their lyric and music. They include Mera jeevan saathi bichad gaya in Babul, Huey hum jinke liye barbaad in Deedar, Yeh hawa yeh raat yeh chandhi in Sangdil, Aye dil mujhe aisi jagah in Arzoo, Toote huey khwabon ne in Madhumati and Yeh mera deewanapan in Yahudi. The list is by no means exhaustive.

The fact that time has not obliterated them from the tablets of my memory is a testimony to the magic he could exercise on his audience. Dilip Kumar has ended his journey on earth. The man is dead but the legend lives on. Posterity will remember him as an outstanding actor, a perfectionist to the core and, above all, as an understanding, loving and good human being.

Mohammed Yusuf Sarwar Khan (the full name of Dilip Kumar) saw the light of day in the old city of Peshawar on December 11, 1922. He was the third son and fifth child of Ghulam Mohammed Sarwar Khan, a prosperous fruit seller, and his wife, Ayesha Begum. Ghulam Khan decided to move to Mumbai (then Bombay) in 1926 hoping that his business would have better prospects in the emerging commercial capital of India. There, Yusuf was admitted to the prestigious Barnes School where he also learnt to play football, one of his favourite sports. As he grew older, he took a liking for cricket. Ghulam Khan was a classmate of Raj Kapoor’s grandfather, Lala Basheshar. Both of them would daily cycle to school.

A time came when Ghulam Khan’s business went through hard times. Young Yusuf had to decide whether to continue his studies or to contribute to the household expenses. He opted for the latter and joined a firm of military contractors in Poona (now Pune). Side by side, he opened his own fruit stall in the British barracks canteen to sell fresh fruits to the Army personnel and their families.

Circumstances compelled him to close his business and return to Mumbai. As his father no more enjoyed a sound health, Yusuf started travelling to places like Dehradun and Nainital, hilly regions where orchards are to be found. 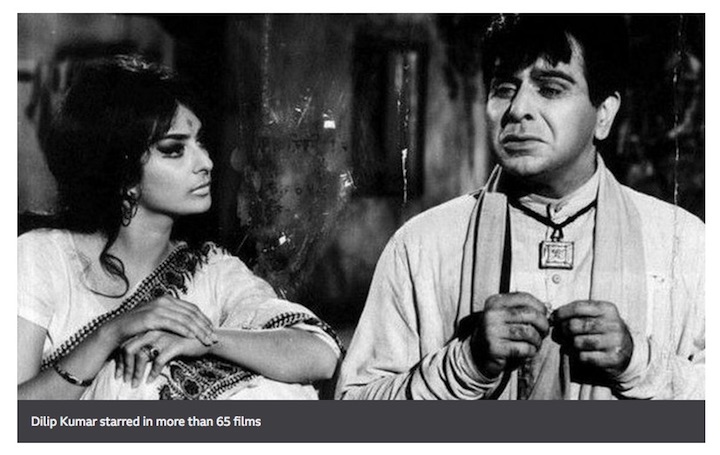 Devika Rani, the first lady of the Indian screen, and director Amiya Chakrabarthy were in Nainital looking for suitable places where shooting could take place. As luck would have it, Yusuf happened to be there and met both of them. They liked his looks.

They met again in Bombay. Devika Rani and Amiya Chakrabarthy took his screen test and signed him for Jwar Bhata. His close friend, Raj Kapoor, who was later to become a legend as an actor and a director of repute, was at that time on the pay roll of Bombay Talkies. He was working as an apprentice.

In these films Dilip Kumar showed what a talented actor he was. In the words of Dr. Trinetra and Anshula Bajpai which I am quoting from their marvellous biography titled Dilip Kumar Peerless Icon Inspiring Generations, “Dilip’s long film career is replete with myriad acting accomplishments which themselves represent a celebration of the very best in India”. I have in fact drawn all the information I needed from this book which is a source of inspiration in itself.

His portrayals remain a long time in the subconscious of his audiences as it is not only the characters he enacts that appeal to their sensibilities but also the sincerity he puts in to give flesh and blood to them. Dr. Trinetra and Anusha Bajpai further write, “His fabled dialogue delivery lowered at times to a mere whisper with telling effect contained a multitude of bewildering vocalisations which were proficiently incorporated to suit every portrayal”. There are many examples to illustrate Dilip Kumar’s magical brilliance as he intelligently enacted certain scenes to which he brought a touch of his own and his genius.

These include the staircase confrontation with Raj Kapoor in Andaz, the jail scene with Leela Chitnis in Shaheed, the drunken altercation with Lalita Pawar, who portrays his mother in Daag and the confrontations with Prithiviraj Kapoor and Durga Khote in Mughal-E-Azam.

Many other powerful scenes can be added. The unforgettable one in Devdas in which the alcoholic, on the threshold of death, enquires, “Aur Kitni door hain gadiwale” (‘How far is the driver’?) is enacted in such a masterly way that it depicts the agony, turmoil and undying hope of ever being able to cast a last glance at the woman he loves before death claims him. Some of the characters he portrayed in films like Ram aur Shyam, Amar, Devdas, Musafir and Daag, among others, continue to haunt us long after we have left the picture house.

Those who have studied his films have surely noticed his movements. What has been termed as the “economies of his movements” is a hallmark of Dilip Kumar’s histrionics. His face portrayed the emotions with sincerity while his eyes conveyed them efficiently. He could establish an immediate rapport with his audiences with merely “a hint of a knitting of eyebrows, a brooding gaze, a twitch of a lip quiver or just a dejected walk”. He was also endowed with an impeccable sense of timing.

From the early stages of his career, Dilip Kumar set very high standards in terms of acting, overall presentation as well as the appeal of his films. He was very choosy about his roles. It is a well-known fact that he did not sign for many films every year. He was also very meticulous in selecting scripts, co-stars and technical crews so as to ensure the high standards he had set out to achieve in his films. He always gave his best in any film regardless of the fate that awaited it at the box office.

The first major commercial success of Dilip Kumar was Jugnu. It rendered it possible for the megastar to begin a series of hits. The legendary star and Malika-e-Tarannum, Noor Jehan, acted opposite Dilip Kumar in this immensely popular film. The movie which had a light romantic theme was released on October 2nd 1948.Its plot revolved around college students (with Dilip Kumar playing a student named Suraj) and their revolt against certain established norms. The film’s tragic ending also marked the beginning of Dilip Kumar as the “Tragedy King”.

Jugnu was at first thought unfit for the screen on the ground that it would influence young college students to rebel. When the film was finally released it went on to become a super hit. Its songs also became very popular. The melodious Rafi – Noor Jehan duet Yahan badla wafa ka bewafa ke siva kya hai, which figures among my favourite songs, became an all time hit. Feroz Nizami’s music is still very much appreciated in this millennium despite modern trends. By that time Dilip Kumar had given an example of the talent he was endowed with. He was later to become a model for aspiring actors.

In the course of his career Dilip Kumar has been bestowed with several awards and accolades. He received the covetous Filmfare Award for best actor in Daag (1953), Azaad (1955), Devdas (1956), Naya Daur (1957), Kohinoor (1960), Leader (1964), Ram aur Shyam(1967) and Shakti (1982). He was awarded the Padma Bhushan by the Government of India in 1991 and the Dadasaheb Palke award was presented to him in 1995. He was awarded the Padma Vibhushan again by the Government of India in 2015. Dilip Kumar has straddled the Indian film industry like a colossus during the last six decades. He has won the respect and admiration of cinegoers across several generations with what has been aptly termed as “the sheer charm of his powerful histrionics and disarmingly romantic style”.

With the passing away of this man, a chapter which dealt with the sixties from my life has come to an end. I will go back to it time and again to live those unforgettable moments which are, so to say, frozen in my memory. They will no doubt remind me of “the still, sad music of humanity”.

P.S. The autograph of Dilip Kumar is also taken from Dr. Trinetra and Anshula Bhajpai’s book. I believe that ‘Kakku’ to whom it is dedicated is Mrs. Kanika Bajpai who is referred to as “the greatest die-hard fan of Dilip Saheb”. I am indebted and grateful to them and their publisher, “Bloomsbury”.