A perfect start is how we can describe Hazard’s performance at Chelsea so far this season. With already 7 goals and 3 assists to his name, as well as where skills and pace are concerned, could this be his time to reach the pinnacle and be listed among the finest players? He has showed incredible ability after finding his best form during the World Cup and his willingness to improve has demonstrated that he has not hidden his ambition to make an impact this season for the blues. However, at his stage, Chelsea should be wary about the big Spaniard team, Real Madrid, which might want to make a move in signing the Chelsea star who has cast a doubt on his Chelsea future.

So far, Chelsea is running unbeaten under its new manager Maurizio Sarri who showed great appreciation towards Hazard’s performance but has set the alarm about Hazard’s stay and transfer to Real. Real Madrid is yet to make a bid (set for January) for the 27-years-old who still has a 2-year contract, but it will be for Chelsea to counter the offer to motivate the stay of its top player. 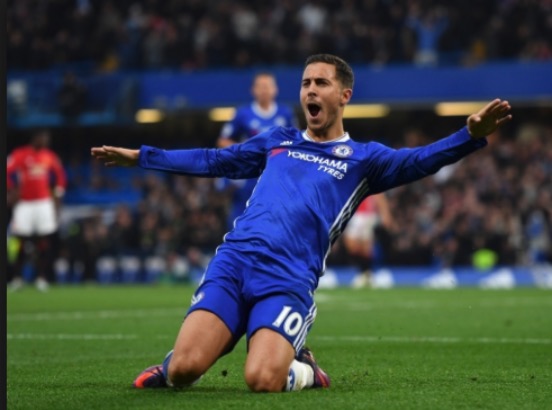 Hazard has spent 6 seasons under the blues since joining the club in August 2012 for a fee of £32m and has won 2 premier leagues. Since then, he has been crowned among the top player of the EPL involved in more goals than any other midfielder with 74 goals and 41 assists.  He has set the scene as a more glorious and complete player since the World Cup mounted with his incredible dribbling, close-control and scoring ability. He kicked off this season by assisting his team win on every occasion and punishing big teams like Arsenal and knocked-out Liverpool from the Carabao Cup with a remarkable goal finding the far corner. Mesmerizing it was while hosting Cardiff, Hazard wrapped up his first hat-trick of the season and secured a win for his side. The Belgian has also been placed among the 4th Chelsea player to have scored more than one premier league hat-trick behind Drogba, Lampard and Hasselbaink.

The Belgian international hinted a great interest in joining the Spanish team and made it publicly understandable about his decision to wait on Real Madrid’s bid to involve a big transfer fee in signing him, probably in January. Whereas, so far, Chelsea has considered negotiations in extending his contract, but nothing confirmed yet to better his salary. Alarming it could be to secure the ideal replacement for Hazard and to the fans despair (maybe), if this has not been met. According to different sources, the ball remains in Real Madrid’s court to place the bid which will secure the move from Chelsea whereby Hazard would likely to agree to. However, as it stands, he has remained sincere with his club and to the appreciation of his team, shall continue to serve with an exemplary performance.

Notwithstanding the above, if Hazard stays and continues to shine with Chelsea, his side may have all the chances to top this season winning some silverware.