The world has faced an unprecedented sanitary crisis with the pandemic of Covid-19. The global health crisis has not only impacted daily economic and social activities but also the role of women and feminist policies. According to the OECD report 2020, it is widely acknowledged that the pandemic has brought differential gender impacts with a general tendency that women have been more affected. While women have been the first victims of this global pandemic, it became inevitable for countries around the world to design and redefine stringent feminist policies.

Mauritius has also not been spared by the pandemic. While over the years, Mauritian feminists have been advocating for women empowerment and gender equality through various feminist policies, we have to acknowledge that it is still difficult for women to bridge the gender gap and break the glass ceiling. The sanitary crisis has brought in more complexity to reduce the gap of gender inequalities. Therefore, there is a need to redefine feminist policies in a Covid-19 era. Mauritius, at its core, is a patriarchal society despite the fact that since 1968 we have had a panoply of feminist policies.

Mauritius has experienced its first lockdown as from 16th March 2020 to 31st March 2021 which has made us realise the gender inequalities in distribution of power and the impact of Covid-19 on feminist policies in a society entrenched in patriarchy. It has been observed that Mauritian feminist laws can be categorised in two main feminist policies which are social feminism, with the gender aspect of a welfare state, and liberal feminism, which put forward struggle for the empowerment of public participation of women. There is no doubt that both theories bring out a revolutionary change with the government stimulus package implemented during the first lockdown.

However, social feminism is about collectivism and the pulse has been tested with policies like Wage Assistance Scheme, the Self-Employed Assistance Scheme and the food distribution during the Mauritius first lockdown period.
Mauritian feminists have led strong lobby against gender inequalities by bringing policies and laws to break traditional barriers. Over the years, women and young girls received improved access to health services, state provision for free education, employment opportunities and protection from law.

Despite the fact that Mauritius has ratified international treaties, the country is ranked 115 over 153 countries in the Global Gender Index Gap 2020. Mauritius has only 11.5% women represented at decision-making level at parliament. With 7% of women on board of directors, women still cannot break the glass ceiling and as per a study commissioned by the Ministry of Gender in 2017, domestic violence cost the state 2 Billion Rs per year, 0.6% of our GDP. The Covid-19 pandemic will worsen the figures and we will need safety nets by redefining feminist policies and laws. 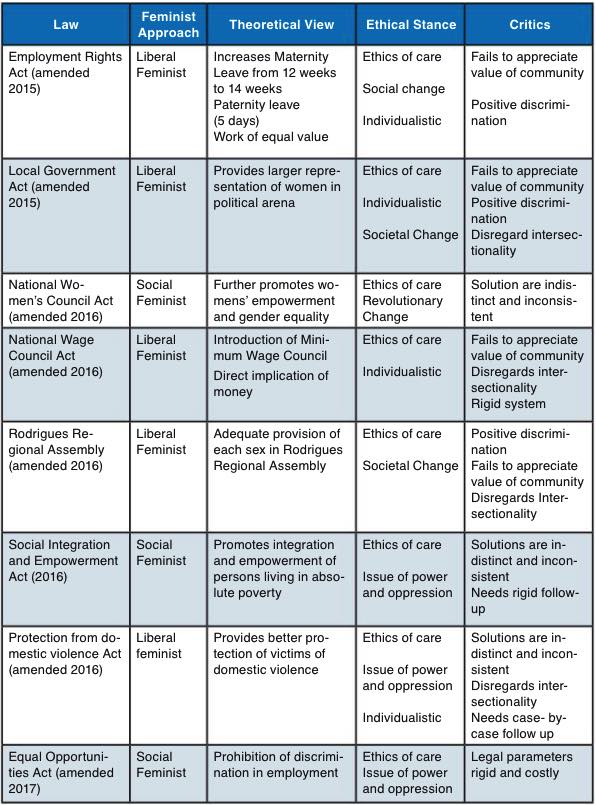 As explained, Mauritian feminist laws and policies have a strong foundation with socialism and liberalism which strengthen the key principle of notion of ethics of care raised by Gilligan (1982, 2011) which puts emphasis on human relationship, sensitivity to others, caring responsibility, attentiveness to context and situations and responsiveness of need.
Most feminist laws in Mauritius have the ethics of care, however, time is now to reinvent ourselves with more open policies in terms of :

1.Work at home scheme,
2.Parental leaves (at discretion of parent),
3.Larger representation of women at decision-making level with a woman as Minister of Finance,
4.More rigid laws to protect victims of domestic with electronic bracelet for perpetrators,
5.Empowerment programs for women in construction industry or home maintenance,
6.Emergency and decent shelters for the poor and squatters.

The way to bounce back from Covid-19 is through redefinition of feminist policies because we cannot leave back around 50% of the population in our reach towards a gender equal economy.