Things will not be the same after this coronavirus  – we keep hearing from many people in the UK.  True, in our lifetime we have not witnessed anything like this.  Some people, still alive, have lived through the depression of the 1930s, WW2, various recessions including the 2008 economic crisis.  With the present coronavirus pandemic, exceptional steps are being/have been taken to cushion the worst effects of the virus – non-essential sectors of the economy not directly involved in tackling the effects of the virus have been closed down; non-key workers have been asked to work from home; for retention of jobs so as not to create mass unemployment, employers furlough their employees, which means that the state pays 80% of their salaries for the duration of the lockdown; self-employed people will enjoy the same benefits in principle depending on their income over the last two years; for some categories of workers universal credit, a form of state benefits,  would either replace or top up their income.

The irony of the situation is that those measures are being introduced by a Tory government that usually does not believe in the intervention of the state.  After winning a landslide victory in the 2019 general elections and winning some traditional Labour seats in the so-called red wall in the north of England, Boris Johnson was forced to adopt an approach that would cater for those new supporters.  Shortly before the explosion of the pandemic, the Chancellor introduced a budget that could have announced the end of austerity.  With the pandemic he had to make more money available for the measures mentioned above.  The so-called Tory prudence has been thrown out of the window and the state, contrary to Tory beliefs, has become interventionist.  The alternative would have been mass unemployment, immiseration and most likely riots on the streets, especially in the big cities.  Austerity could not continue to be served especially after the Brexit campaign when lots of promises were made to the population.  The mindset has changed.

After the 2008 economic crisis and the election of the Cameron government in 2010, to balance the books, it was claimed, cuts had to be introduced and the public services bore the brunt.  Various figures have been brandished about, but on average certain sectors like education and health suffered as much as 30% cuts to their budgets.  The state was meant to get smaller, very much in keeping with that branch of Tory ideologists.

In the face of the coronavirus pandemic, the government adopted a strategy that is now seen as wrong.  Initially there was the option of going for ‘herd immunity’ that allowed the population to get infected thereby developing immunity and then becoming economically active.  But the upshot of that strategy would be the death knell for a large part of the vulnerable in society.  That was abandoned and replaced by a strategy of containment and now suppression and lockdown.  What caused the confusion for the government was that if they had stuck to ‘herd immunity’, the National Health Service would have been overwhelmed, in fact might have collapsed with disastrous consequences through lack of beds and necessary equipment.  Many analysts have been side-tracked by the mass testing in South Korea, although we should not overlook such a policy, but it also requires other measures besides mass testing.  The frontline NHS staff for the most part had still not received full personal protective equipment although promises were made.  The country was not ready to tackle the pandemic.

This failure can be traced back to 2010 when the Tory government introduced those cuts.  The pursuit of a smaller state, which means less state intervention, has weakened the NHS.  The ideological battle, which had started under Thatcher, had caused many casualties in the British economy.  Although the Blair government funded the NHS adequately while hanging an albatross round its neck with the public-private partnership in the form of PFI (private finance initiative), he had continued Thatcher’s policy of privatisation in the main. A safety net that was provided for the most vulnerable in society has been and is still being gradually removed.  The decision was not an economic one, but ideological and political.  There was surplus to be taken out of the economy and the beneficiaries were in the main funders and donors of the Tory party.  Some ex-ministers whose ministry was in charge of the sector privatised later became CEO’s of the privatised companies.

But the debate about the state has never gone away.  For progressives the question of the state is not in doubt; it is a reflection of the dominant class in society, but the main protagonists in  the debate are the right wing or the social-democrats; the Labour Party has always supported a bigger intervention of the state in society as a whole, not just the economy, although the form of the intervention is a top down one, which does not involve the people who are supposed to benefit from that intervention, whereas the supporters of the so-called free market wanted less state intervention as that would allow them to accaparate surpluses which would have gone into re-investment.

Press forward to the beginning of the pandemic.  If the NHS, which is fervently supported by the majority of the people, were to collapse, then the consequences for the Tory party would be phenomenal.  So the strategy to elongate the process to combat the virus, which is the result of a decision to cut back on the health service, has brought about a volte-face by the government; not only had they been forced to adopt a policy of investing in mainly infrastructures, thereby seemingly reversing austerity, but they now have to finance business and workers to keep unemployment down.    The reversal in thinking is phenomenal and now the overwhelming feeling is one of massive state intervention.  To have left the situation to market forces and to the private sector would have been disastrous.

The debate will go on about whether, given the preponderance in the government’s thinking in trying to save the economy, business and jobs, it is a political or economic decision.  More abstractly one is looking at the relationship between politics and economics.  Sometimes what masquerades as an economic decision is in fact the result of a political decision. In 2010 the Tory and Liberal Democrat coalition government adopted a programme of massive cuts, allegedly to balance the books after the 2008 economic crisis.  Even economists were divided about the way forward as to whether to adopt austerity or a programme of massive public expenditure to get the economy on an even keel.  But the Tory government, while cutting back public expenditure, was giving away massive tax cuts to the better off.  The state was being reined back.

With the present pandemic, as we have mentioned above, the state is having to intervene very heavily as it has no choice to avoid a social catastrophe.  Public debt is going to probably increase to 100% of GDP and one wonders how the Tory government is going to finance it.  The hope is that the state would carry on playing a benevolent role to look after the vulnerable, but, as they say, everything is up for grabs.  Either there will be more state intervention or we could go back to the same policies that have created massive inequalities, increase in homelessness, insecure jobs and the decrease of the safety net.  Some analysts seem to believe that things will change automatically, but then the road to hell is paved with good intentions.  The political struggle will not abate; the privileged ones will fight to recover the lost ground, if any.  Some would have made big fortunes with the fluctuations in the stock market and with possible quantitative easing will see their assets bloated.  The media, essential tool in controlling the minds of people, would still be in the hands of big business. If real changes were to happen, the fight is to take place at the political level if ordinary people would want the state to look after them.

If and when we reach a point of exit from the lockdown, the process would create great uncertainty and massive dislocations; the toilet industry would perhaps recover well whereas the airline industry would take a long time to recover and that too in stages – a whole book could be written on this.  This unevenness would create job losses on a massive scale and that is when the state would be compelled to intervene heavily to avoid social disturbances and probably riots as well as to create stability.  This cannot be left mainly to market forces. 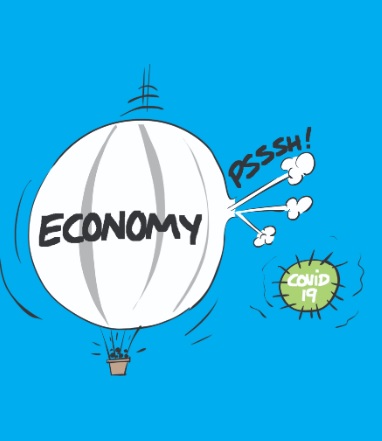 The role of the state is crucial for what happens in Mauritius. There are some lobbies fighting for the privatisation of services, especially water and electricity.  In the British colonies, the British government found that the provision of services by the state was a guarantee for the smooth running of the system; while the UK railways were in private hands, the Indian railways were run by the state, and it is obvious why.  In many ex-colonies the services are run by the state.  Privatisation is a way of taking surpluses out of the economy, and it happens with either higher prices for the consumers or worsening of conditions for the workers.  But the big debate to be had is about the relationship between politics and economics as well as the nature of both disciplines.

Whatever happens as a result of the coronavirus, the state would stake a big claim as it would be the difference between wild capitalism and a humane society.