It’s Friday 15 August 1947 and a huge crowd is watching Nehru raise the national flag of independent India at the Red Fort in Delhi for the first time. The subcontinent had been freed only hours before and the chief architect of this mammoth task was greeted just minutes ago with the loudest of roars. Almost. Gandhi is not in the Indian capital. He’s in Calcutta hundreds of kilometres away after having accepted to serve as human shield for an infinite number of Muslims.

Gandhi is thrown off a first class train wagon in South Africa. He returns to India. Negotiates with the British. Organises peaceful strikes. I see Nehru. The massacre at Jallianwala Bagh. They snatch independence but the country is split into two nations as Jinnah wanted a separate and pure land for Muslims. A huge exchange of population follows as Hindustan Muslims leave India for Pakistan while Hindus do the opposite journey. They clash. Gandhi is shot by Godse. There’s so much happening in this movie and I register only a tiny fraction.

Many years later I read Collins and Lapierre’s extraordinary book and was surprised to learn that the population exchange was not complete. Tens of millions of Muslims did not leave India. Pakistan was initially a two-part country and that the second part was one I had known for many years under a different name from my school atlas. But perhaps the most shocking information is that Jinnah, its Quaid-i-Azam, ate pork. Skipped Friday prayers. Drank alcohol. Smoke and spoke so little Urdu that he had to speak in English when announcing to the Indian population that he had secured partition. 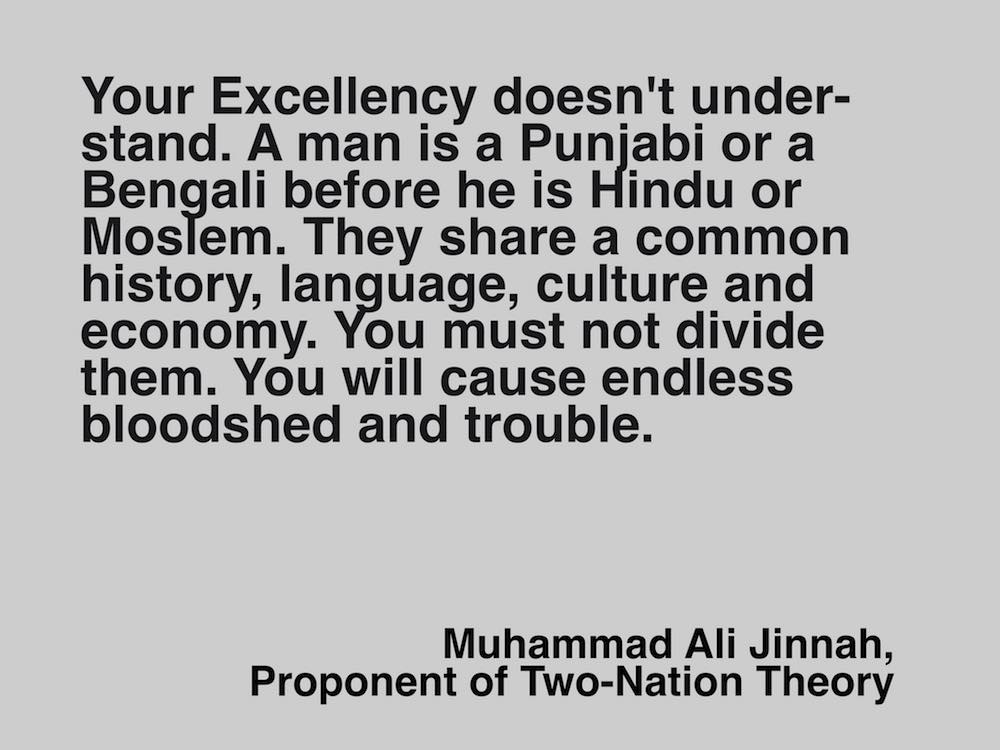 So much for the guy who insisted that a 400-million-strong nation be amputated because according to him Hindus and Muslims were so different that they needed separate dominions. It’s not the first time power is a bigger aphrodisiac than religion. The other thing that caught my attention were the details about the maharajahs. Including those of the Nizam of Hyderabad, the richest man in the world at the time. But just like with the movie I missed plenty of things because there’s so much stuff in that great book. Not having yet gone to India did not help. How do you process all the places beyond let’s say Bombay, Delhi, Amritsar, Calcutta, Kashmir and a few others? While there are informative maps and well captioned pictures in F@M it’s still a huge challenge.

What is This Country?

I eventually visited Hindustan. It didn’t take very long to be knocked out by the sheer scale of this nation. If you thought Freedom At Midnight was tough to digest just imagine you are checking out Jama Masjid in Old Delhi and still sizing up the iconic mosque when you see a very familiar site between many of its pillars looking at you: the Red Fort. It’s overwhelming to see so many impressive landmarks so close to one other. It’s true we had sensed that proximity but the map in the brand new and already dog-eared Lonely Planet is not the territory. And you can never be prepared for this kind of dimensionality. No. So we don’t go up the minaret and instead ask Scotty to beam us to the Lal Qila hoping to catch a glimpse of Gandhi. But not before smiling at the thought of one Mark Twain quote. 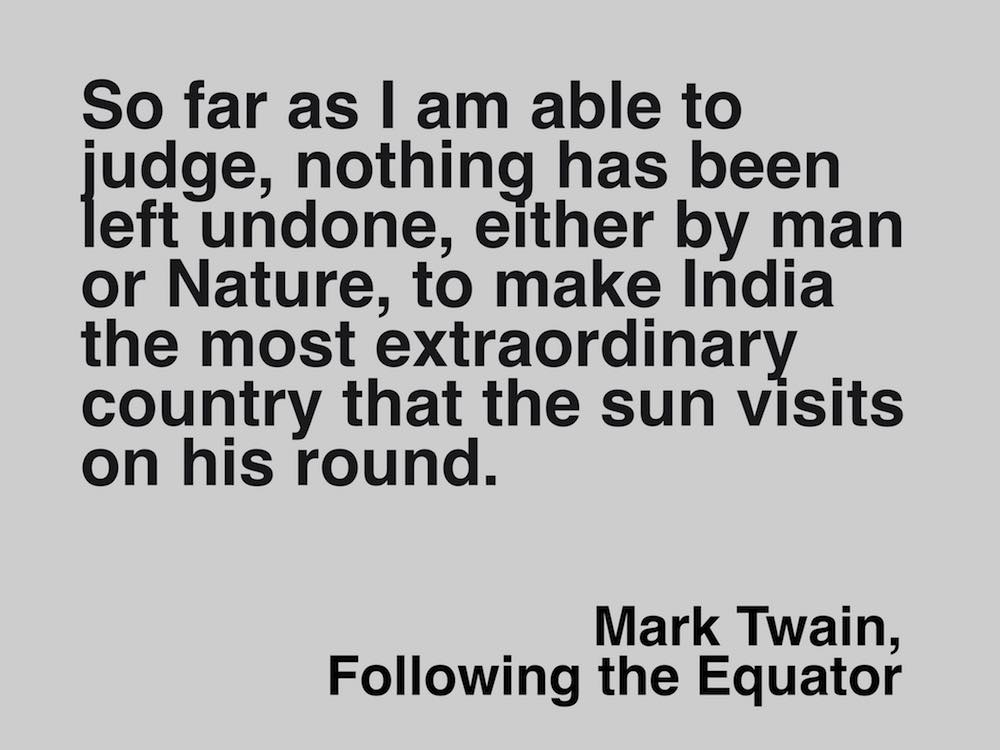 Not an easy task because of its complexity and very long history. It’s a slower process than for other countries. So it’s a perpetual updating with new perspectives provided by fresh knowledge and impressions like when I was listening to a fellow citizen talk about his experience travelling around India during his fairly long studies there – we’re probably looking at the mid-1970s here. His eyes lit up with fond memories remembering this city and that city, this experience and that experience. The nice feeling of just being there. I’m enjoying the listen. And then he summarised a trip to neighbouring Pakistan with one sentence: Not easy that country! Isn’t that just another biased Indo-Mauritian being way too proud about the country of his ancestors? Actually that much-appreciated person is probably a Muslim. I didn’t ask. It doesn’t matter. He may well be a Zen master. He’s just a kind person. And his ancestors are most likely from Bharat too.

Getting Answers To Old Questions

I once came across a long list of the major accomplishments of India. You know the one that says she invented the number system we use, yoga, the zero, etc. I was familiar with most of them but there’s one that I found very unlikely. It was attributed to Hu Shih, an academic from China, who mentioned some kind of cultural conquest and domination of the Middle Kingdom that lasted for a very long time. I obviously doubted its veracity because of Shaolin Kung Fu, Confucius, acupuncture, the invention of paper, printing press and so many others. But then I read the excellent Tao of Physics by Capra and eye-opening books on eastern thought that explained how Buddhism spread in China because it had answers to questions Confucius did not. Followed by landing on the absolutely delicious interaction between Bodhidharma and Emperor Wu and why the former taught modern martial arts to monks at the Shaolin Temple. 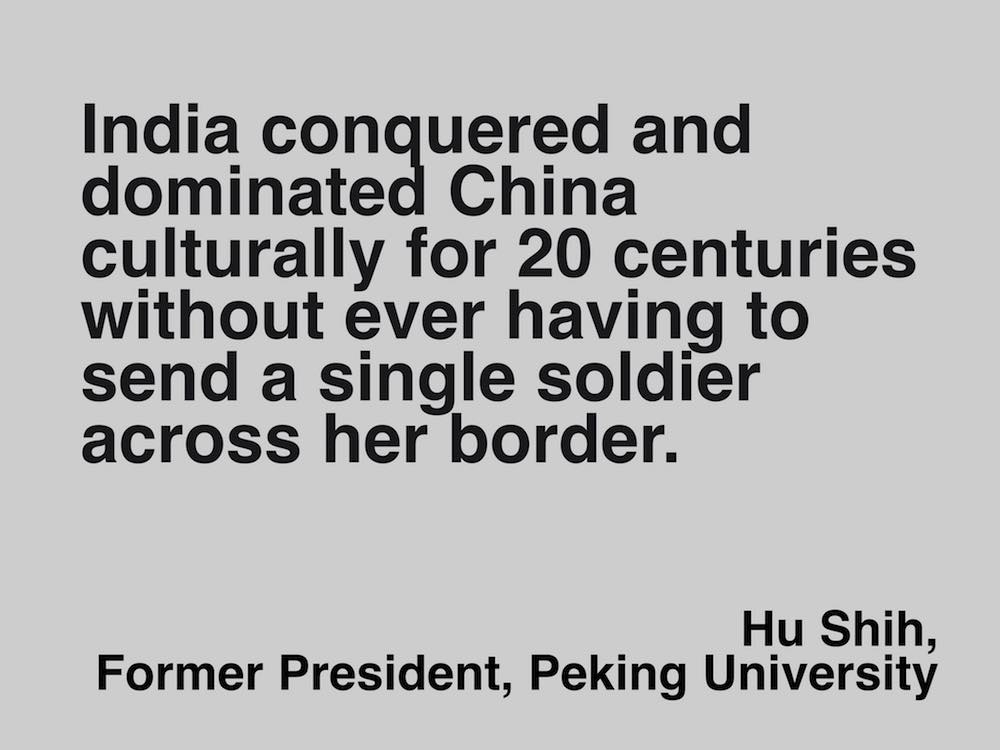 1947 Partition of Bengal Not the First One

Watching Satyajit Ray’s documentary on Rabindranath Tagore a few weeks back taught me how the Bengali poet responded to Lord Curzon’s plan of dividing the province along religious lines to slow down the Indian independence movement. He wrote patriot songs against it and led the singing protests in the streets of Calcutta. When the plan was implemented in October 1905 he asked every Hindu to tie a rakhi to his Muslim brother’s arm. Six years later the partition was undone.

I knew next to nothing about Tagore until recently. Now that I’m a fan he’s on my radar. Maybe I will start with that conversation he had with Einstein or the one with Heisenberg where what the latter thought were crazy ideas in physics turned out to be pretty ordinary in Indian thought. This is a lot like quantum scientists telling the Dalai Lama that their discipline had been practiced in India for more than 2,000 years.

Read two-thirds of the abridged version of this amazing book 7-8 years ago and read most of the remaining pages recently to understand India a bit better for the big day. I skipped « The Six Systems of Philosophy » section again for the same reason I didn’t read it the first time. I’m not exactly into unifying strands of physics. Or adding to the Vedas on the banks of the Indus. But I should have read it for Azadi ka Amrit Mahotsav #250. Doordarshan also made a great documentary series directed by Shyam Benegal, Bharat Ek Khoj, based on the book. Don’t bother checking the cast – it’s excellent, trust me. Just watch the 53-episode drama and be dazzled by 5,000 years of history.

He died in 1941. But there’s Gandhi risking his life again to save an ocean of lives. India’s partition has claimed between 200,000 and 2 million lives – some say the bloodiest fortnight in human history – but it would have been a lot more had Mountbatten’s one-man boundary force in Bengal not produced a miracle. Unfortunately neither Gandhi or Tagore would be there when trouble would be brewing again in the region twenty-four years later in what appeared to be a new version of Jinnah’s two-nation theory. Someone else perfect for the job would though.

When she was back from one of her trips to India in the last quarter of the twentieth century my mum told me there was something very different about that country that time. A lot more order. People getting onto trains in a more disciplined manner and not the usual chaos. And not only at train stations. It was the same kind of order that had given Tagore pause years earlier when he was visiting the girls’ dormitory at Santiniketan and arrived at Indira Gandhi’s spot.

In one of his books Lee Kuan Yew says that Ms. Gandhi was the toughest woman PM he had met in his life. She had a « steel in her that would match any Kremlin leader ». This might explain part of the very warm rapport she had with USSR supremo Mr. Breznhev and the signing of the relevant treaty to see a friendly fleet from Vladivostok slide near the Bay of Bengal to help end the Bangladesh Genocide in 1971 which claimed three million lives. Another interesting story in that conflict is how Sehmat Khan, an Indian spy from Kashmir, helped sink an enemy submarine that was on a very strategic mission in the same bay with the intelligence gathered from her embedded position in current-day Pakistan. We also need to salute Missile Man and People’s President Abdul Kalam who made his motherland safer while he was around and also left good ideas behind which have been implemented after his death. 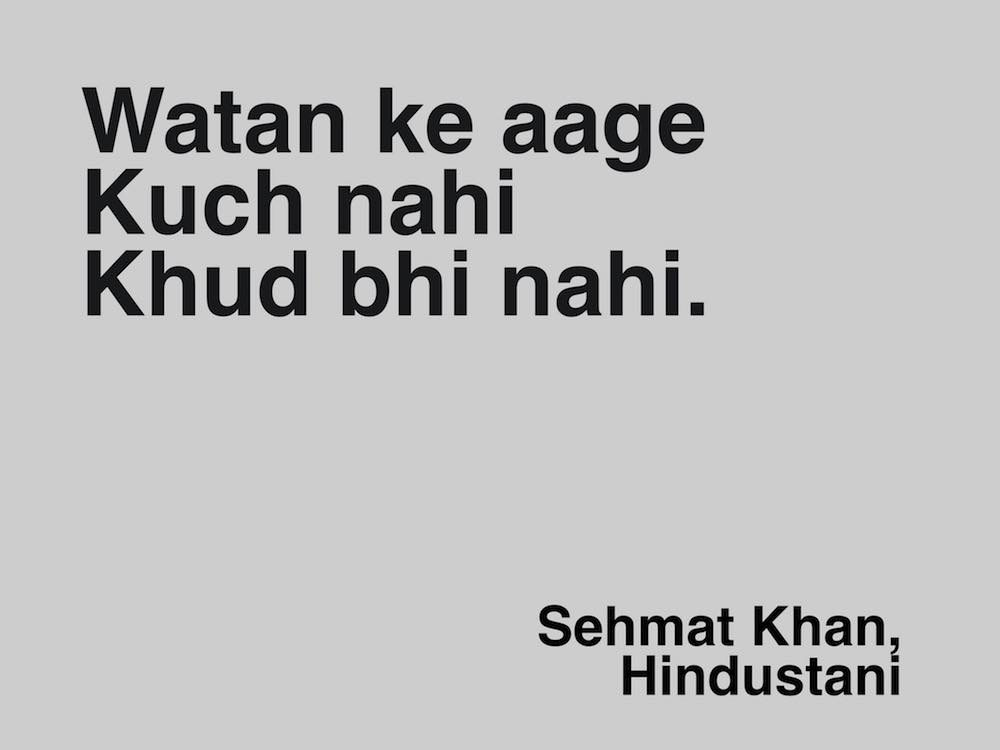 It’s now Thursday 15 August 2097. India climbed the last step of the economic podium three decades earlier resuming the position she had held for so long. The Cheetahs are thriving, thank you for asking. The 15th Dalai Lama, a woman, is giving a lecture near Mount Kailash on a famous Shantideva chapter to a sea of people while the Tiranga floats in the background. As it does in Peshawar, Quetta and Gwadar.