How Our Offshore Treaty Risk Became a Much Bigger Problem

With 640m multidimensionally poor people in India in 2005-6 and the internet making millions a lot smarter it was natural that the pressure to renegotiate the DTAA with Mauritius would increase significantly. So it was sheer stupidity for one bean-counter to flatten our tax structure to a rate (15%) that has caused serious damage to our economy in order to build a facade of low-tax jurisdiction. Besides we never voted for this crap aka Paglanomics or if you prefer Shaitanomics in 2005. Killing our savings culture was not exactly another smart move. Neither was gifting a sunset industry €138m — its weight in the economy was more than six times smaller at the end of 2018 (0.5%) than it was in 2005. Add the severance of the link between what we pay for oil and what it costs on the world market and stupid hire-fire laws to understand why we’re heading into a wall.
And a few days ago he uttered more rubbish including that without our Global Business (GB) sector — this is where he’s been working for many years — our currency would maybe have been trading at Rs50 to the USD. Scare tactics by Dr. TINAnen. But as the chart shows it took only five years from the inception of that sector for our rupee to lose a quarter of its value and a further five to shed almost another 25% of the average value it had in 1992 — an index of the dollar value of our rupee is used so that when the curve is going down it means our rupee is losing value with respect to the USD, makes it easier to visually estimate its percentage changes and we’ve added two horizontal lines to show two values of our rupee relevant for our discussion here in the format you’re used to seeing it.

This chart will also help put the myth that Ringadoo was a bad Minister of Finance because he devalued the rupee by 30% and 20% in a better perspective. See our rupee lost 55% of its dollar value between 1992 and 2015 in an economic environment that was incomparably better. In fact we would probably have hit another dismal low had there not been a BoM Governor who knew what he was doing between 2007 and 2014 to resist energetically an incompetent Minister of Finance who when asked why the rupee had been depreciating rapidly replied that it had not depreciated for a long time. For sure current trade imbalances reflect to a great extent the generalised policy-making failure of the past dozen years. Our rupee will enjoy better days as soon as we get our act together. Just like India who had by 2015-6 reduced the number of poor people by 271m. 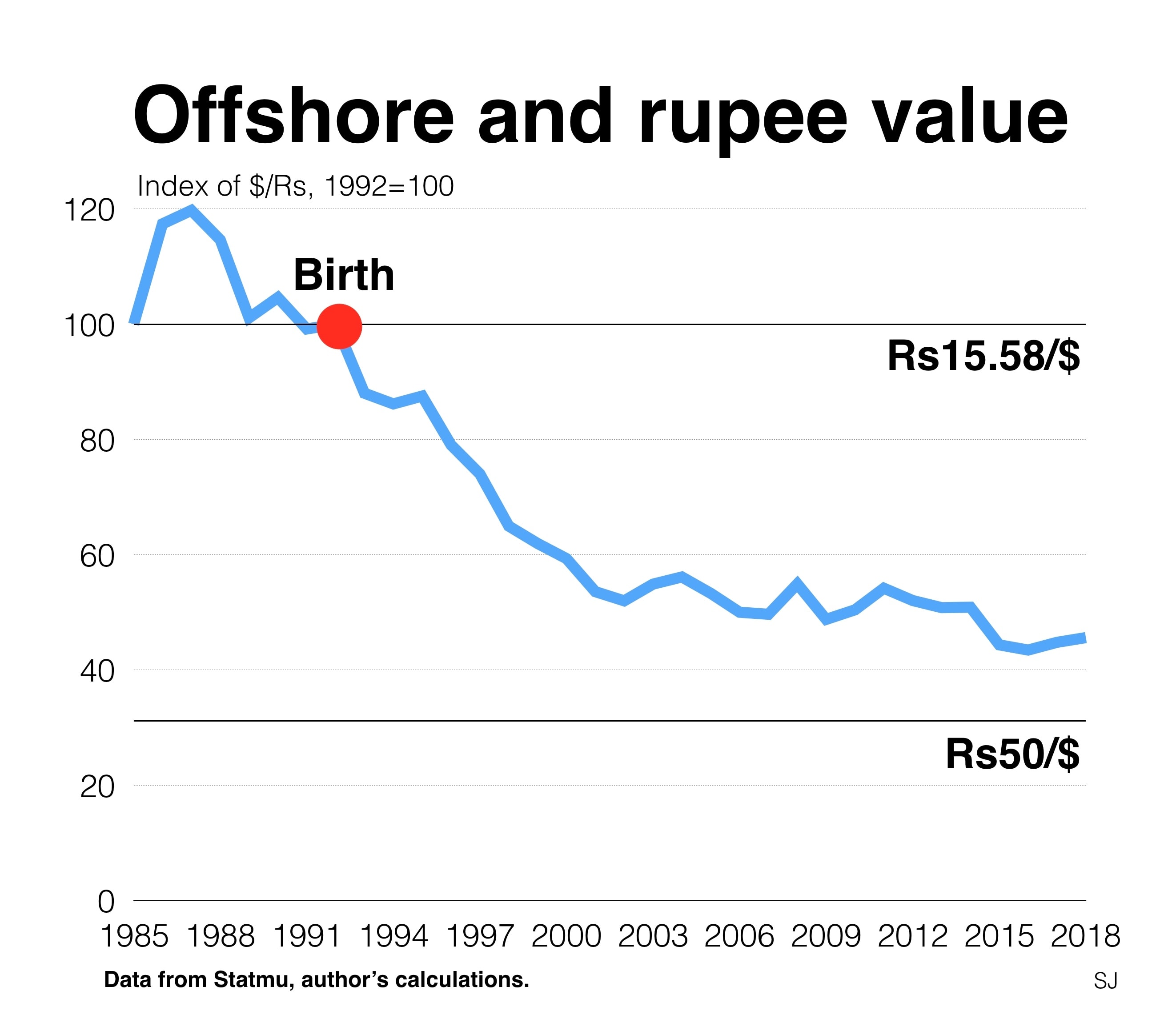