To simplify, human trafficking is about luring victims by force, fraud or coercion and compelling them to perform labour or commercial sex. Along with war and terrorism, it is, in my view, one of the most shameful activities on earth.

Anti-Slavery, a UK-based charity, citing figures from the International Labour Organisation, says that 40.3 million persons are in modern slavery across the world, 4 million being children. 99% trafficked for sex exploitation represents women and girls, and 4.1 million persons are exploited by governments.

Through a Thompson Reuters Foundation (London) report (30 July 2018), we get to know that we have “40 million victims of modern slavery worldwide – 25 million in forced labour, 15 million in forced marriages.” It calls human trafficking “one of the fastest growing enterprises”. And according to Walk Free 2018 Global Index, six out of every 1,000 people in Ethiopia are victims of modern slavery. It’s estimated that 134,000 were living in conditions of modern slavery in Italy in 2016. Germany has 167,000 living in a similar condition. Human trafficking is an industry of $150 billion worldwide.

The Indian National Human Rights Commission reveals that 40,000 children are abducted each year while NGOs point out that between 12,000 and 50,000 women and children are trafficked into India annually from neighbouring States for sex trade.

South Africa is considered an active hub for human trafficking. A number of children are ultimately found but the rest are left to their fate. They’re the ones who will fall into the hands of traffickers. Children are made to work in mines, quarries or agriculture. “About one million of them work in mines and the number is increasing,” notes the ILO. They “go deep underground only as wide as their bodies” and “haul loads of coal weighing more than they do”. Ill-fed children bathe buffaloes and pick up dung. Childline India Foundation Newsletter informs us that “1,000 to 1,500 Indian children are smuggled out of the country every year to Saudi Arabia for begging.”

Abducted or duped girls are sold off as brides. Fake agencies advertise for live-in maids with promising salaries in foreign lands or within the country. The placement agents “keep the girls in small, unhygienic rooms packed together”. The girls are often raped before being smuggled to employers to be enslaved and to live in solitary confinement. In many cases they’re underpaid. It’s a complex situation involving brothels, adoption, child soldiers and organ harvesting.

Sudden separation from parents is traumatic. Getting smuggled into an unknown country or an unfamiliar environment is destabilizing. They face adaptation problems as well as a cultural shock. They’ll be marked forever. Children often work in risky conditions without protective equipment. Moreover, they may fi nd themselves suffering from sexually-transmitted diseases. They live in fear and anxiety. They will never know what it means to play with a doll or to run after a ball. Neglect will kill then sooner or later. They’re deprived of schooling.

In view of the alarming figures presented above, we see the ineffectiveness of the attempts at addressing the issue. Governments and organisations offer help to victims but this does not solve the problem. We don’t see them tackling the root causes. That’s why year after year it resurfaces. More emphasis on prevention is desirable – more intensive awareness campaigns, education, dissemination of information, strict implementation of laws. Trafficking must be a daily topic and not just a one-day international celebration.

If traffickers can detect loopholes to carry on their lucrative business, why can’t governments and organisations? Without minimizing their efforts, we’ve a feeling that they’re helpless before the situation. Or is it that they’ve other priorities? Today the very countries that profess to be economically successful are the ones that are violating individuals’ rights. India is home to the largest number of slaves globally, with 8 million, followed by China (3.86 m), Pakistan (3.19 m), North Korea (264 m), Nigeria (1.39 m), Iran (1.29 m), Indonesia (1.22 m), Democratic Republic of Congo (1 m), and Philippines (784,000). This is just to give you an idea of the magnitude of contemporary slavery.

Children aren’t protected enough. There are well-organised gangs at work. Children disappear at railway platforms, in markets or streets in broad daylight. This indicates we’re not giving enough attention to educating parents and children about precautionary measures.

Can we put an end to human trafficking? No, unless we go to the roots. Trafficking in persons is a complicated issue because it is rooted in social, political and economic conditions. As long as we’ve poverty, marginalization, difficult access to education and health, crisis due to war, inter-ethnic conflicts, unemployment, inequality, discrimination, displacement of minorities, political instability, you’ll always have shrewd traffickers and smugglers to exploit the situation. Being content with offering help to survivors of human traffickers isn’t enough. Let’s control the causes that are leading to trafficking. This will take time and real commitment from governments. That’s why an end to human trafficking isn’t for tomorrow. 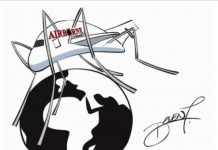