Mauritius is set for a general election on the 7th November and this election will have profound implications on the future of the welfare state. Industry experts and politicians have a leading role to play in tackling environmental issues, reforming education, reforming health and addressing the housing crisis through the development of a just society. But none of this will be possible if tactical voting takes place. What is tactical voting? Tactical voting takes place in elections with more than 2 parties, when a voter chooses to vote for another party other than his preferred party in order to prevent an undesirable outcome. Mauritians will definitely vote to put an end to repression and political corruption because they were shocked by the collapse of BAI, repression to subdue political opposition and suppression of media.

It is now time to support our welfare state and think of its future at a time when the role of the state is being challenged by population ageing. Our welfare state is so much more than just charity. The welfare state is not about asking the rich to provide for the poor. Healthcare, education and basic old-age pension are for all of us not only for the poor. At a time of financial stringency, some politicians would debate whether we can still afford the welfare state and would go even further and privatise our public utilities and services once in power. If this happens, Mauritius will become closed to the hard-working people who make our economy go. Splitting the vote is a real danger at this general election because we are all at risk of electing a single political party that would privatise our public utilities and services instead of supporting the welfare state.

The choice is clear at this general election. Mauritians should vote for the political party that would put eradication of poverty on top of its priority list and not secretly plan the privatisation of our public utilities and services. Crime rate is related to poverty. Drug abuse is related to poverty. But we all want to live in a safe society. And we cannot get rid of poverty without addressing the problems of poor housing.

Poor housing conditions are associated with a wide range of health problems and adding to the cost of healthcare. We can break this poverty cycle by voting for the political party that has set out a comprehensive and realistic vision for the future of our country that addresses pressing issues facing us today. We need a new welfare model for the age of ageing and a program that is viable and fair across generation for pensions and savings delivery models. We need to rethink healthcare, reform education and housing but above all, rethink on how to eradicate absolute poverty. We cannot expect solutions from the same minds that created the problems. We should therefore put our trust in the political party that laid plans for a new social contract in the 1930s which subsequently lead to the birth of the Mauritian welfare state. 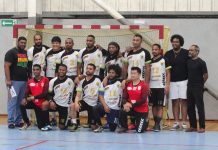