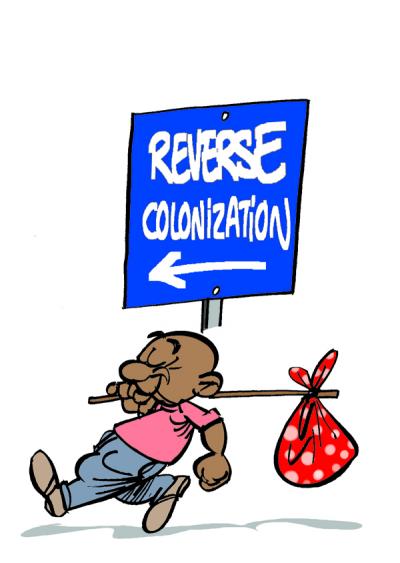 I took a trip to Europe recently. One of my first observations was at a British airport. Bizarrely enough, what immediately came to my mind were the hordes of immigrants who dig holes like moles and try and make it to the U.S. on an illegal immigrant status. They actually go through a physical barrier, including barbed wire, guards and stunts of all sorts to counter the influx. But the “UK Border Agency” is a bit of a fictitious filter and despite its rebranding and revamping, it looks like that has done little to but ‘borders’ to the seekers of a better lifestyle, made in the UK. So the Pakistanis, East and Western Indians, Africans and new wave of Chinese ‘visitors’ are having no more trouble than a long queue and showing proof of patience to make it to the British Queen’s Land.
Once inside the Land, the scene is no more different. The purpose of my visit was academic and on consulting the list of people involved in the same activity as me, 75% of them were Chinese. Walking down the street, the most common food I found both on the Island and on the Main Land (Europe) was definitely not jacket potatoes or baguette, but kebabs and pita bread. Serving in cafés and as cleaners were a stack of Poles or other Eastern Europeans, currently looked upon almost as severely as the ones from former colonies, including Mauritians (of course), Pakis, Indians, Ghanaians, Nigerians, Algerians, Turks etc… (depending on who colonised whom).
So this is the karma of colonisation! After centuries of rule in these countries, putting their people as second class citizens, perverting civilisations and societies, annihilating established orders and hierarchies and other countless crimes (slavery, indenture etc), it appears that the former colons are now getting a taste of their own medicine. There is so much moaning in Europe and the UK about migrants, settlers, asylum seekers and the new cross-border flow encouraged by the merging of the Old Continent that little do they realise they have brought it upon themselves. Although much annoyed by having to repeat myself three times to the Pole lady just for a cup of tea with very little milk… and finding it hard to find good pub grub or a good old-fashioned chippy, I do have to admit to being quite amused by the whole thing!
Karma is about reaping the seeds one sows… it’s about the Universe settling its scores through its own celestial use of Natural Justice. If Europe, and some countries in particular, is crumbling under the weight of debt, unsustainable social spending and undesired levels of immigration, it is much because of what it sowed across the world in its heyday… when its ships would leave its port cities to chase riches belonging to other nations, to use these nations’ people and their possessions for its own gratification and glory. How many people have suffered in colonies? Who benefitted in such places, other than the ones who proclaimed themselves as masters?
I shall not cry for Beloved Europe (or England)… I just pity the ones who are there now reaping the fruits on an old, cursed labour. I feel sorry for the ones who are “no longer at ease”, as Nigerian author Chinua Achebe portrayed in his African Trilogy. Perhaps it’s our turn now, the former colonies, to feel at ease… to settle where the settlers once came from… to take from them what they once took from us. Where is the injustice in that?