With its mandate nearly ending, the Lepep Government has failed to meet two major water sector objectives that it set itself in December 2014/January 2015. The first objective, providing 24 by 7 water supply to the whole country, was stated in l’Alliance Lepep’s election manifesto (Gouverner pour le peuple et avec le peuple) and emphatically confirmed during a press conference held by the alliance soon afterwards (Week-End 23/11/14). The second objective, reduction of Non-Revenue Water (NRW), was contained in the Government Program 2015 to 2019. NRW is potable water lost through leakages in pipes and pumps, not registered by faulty meters, and stolen by dishonest consumers.

Up to now, the Central Water Authority (CWA) has been unable to provide 24 by 7 water supply to the whole country despite substantial funds invested by the Government in the replacement of old pipes and building other water infrastructure. The three-year strategic plan attached to the 2019-2020 budget indicates that, in June 2019, 65% of the number of consumers received water for 16 to 24 hours daily. Lack of a reliable water supply has resulted in street demonstrations in various parts of the country including Curepipe and L’Escalier prompting the Leader of the Opposition to declare that the CWA has become a menace to “la paix sociale” in the country (Week-End, 31/3/19).

Another undesired effect of the failure to provide 24 by 7 water supply is its harmful impact on the economy. Before going to work, after work hours or during odd hours at night, many workers must tire themselves collecting and storing water. Such effort decreases their productivity. To ensure a reliable water supply, enterprises have to invest in pipes, pumps, valves and water tanks thereby diminishing the funds available for job creation and purchasing equipment for added productivity.

Unknown to most Mauritians because it does not bring daily hardships, NRW in Mauritius has continued to increase since December 2014 to such an extent that the Mauritian water sector is a shame for a country with an upper middle-income economy. Table 1 indicates how CWA’s volume of NRW evolved from 2011 to 2018. Volume of NRW is calculated by subtracting the volume of water consumed by CWA customers from the volume of potable water produced by the utility. Volume of NRW went up from 146 million of cubic meters (Mm3) in 2015 to 177 Mm3 in 2018 (see Chart 1). NRW expressed as a percentage of volume of water produced increased from 57.64% in 2014 to 61.92% in 2018 (see Chart 2). Data published by the American Water Works Association imply that a percentage NRW exceeding 25% is a matter of concern and requires immediate attention. 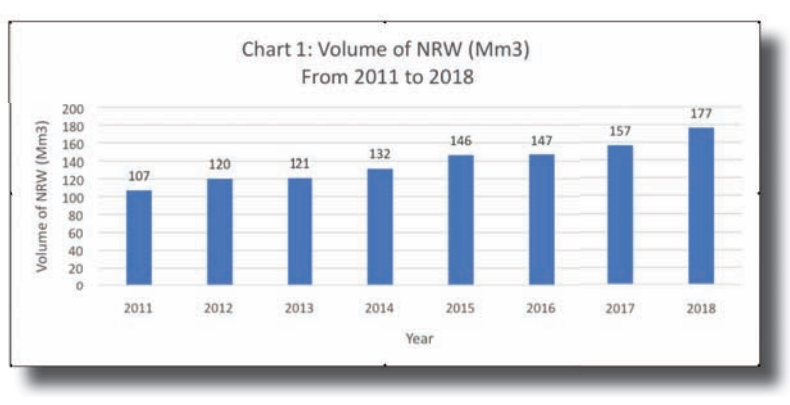 Source of data in columns 1, 2 and 3: Statistics Mauritius

The shame becomes apparent when the percentage NRW in Mauritius is compared to those in other countries as shown in Table 2. With the resources available in an upper middle-income country (UMIC), CWA’s percentage NRW should have been around 14% as is the case in Namibia, another UMIC, instead of 62%. Even low-income countries have percentage NRW less than the one achieved by the CWA.

High percentage NRW results in unnecessary financial loss for the CWA. The utility pays for filtration, chemical treatment, and pumping in converting raw water into potable water, and, out of 100 litres produced, it loses 62 litres and sells only 38 litres. To enable the CWA to operate, Mauritians have been financing the CWA indirectly through taxes and levies on petroleum products in addition to paying for their water bills.

At least two reasons explain the failure of the Government in meeting its water sector objectives. First, the Minister of Energy and Public Utilities adopted the “Government is Government and Government decides” approach in addressing the problem of the institutional setup of the water sector. He wanted to impose his model of privatization of the CWA and failed, instead of finding a solution with the participation of sector stakeholders such as CWA management, workers’ unions, consumer groups, and NGOs. Second, according to several press reports (22/9/2018, 1/10/2018 and 1/5/2019), recruitment and contract extension of CWA workers are opaque and at the mercy of political agents. Such vital human resource functions should have been transparently undertaken by CWA professionals to enable the recruitment and retention of the right manpower, which are prerequisites for the efficient operation of any organization.

The MSM-led Lepep Government inherited the problems of unreliable water supply and high percentage NRW (above 55%) from the Labour-led Government that ruled the country from 2005 to 2014. The Lepep Government failed to provide the country with a 24 by 7 water supply and worsened the NRW problem. Mauritians should look beyond the two parties, Labour and MSM, if they want a resolution of the two water issues and water services befitting an upper middle-income country. 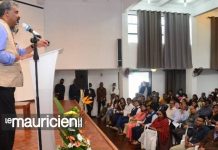