It was with great sadness that we learned on Saturday 28th December 2019 that Prof Dr S.A.Baligadoo passed away in a Paris hospital following a long illness.  For the people who have known him all his life, it is a great loss. 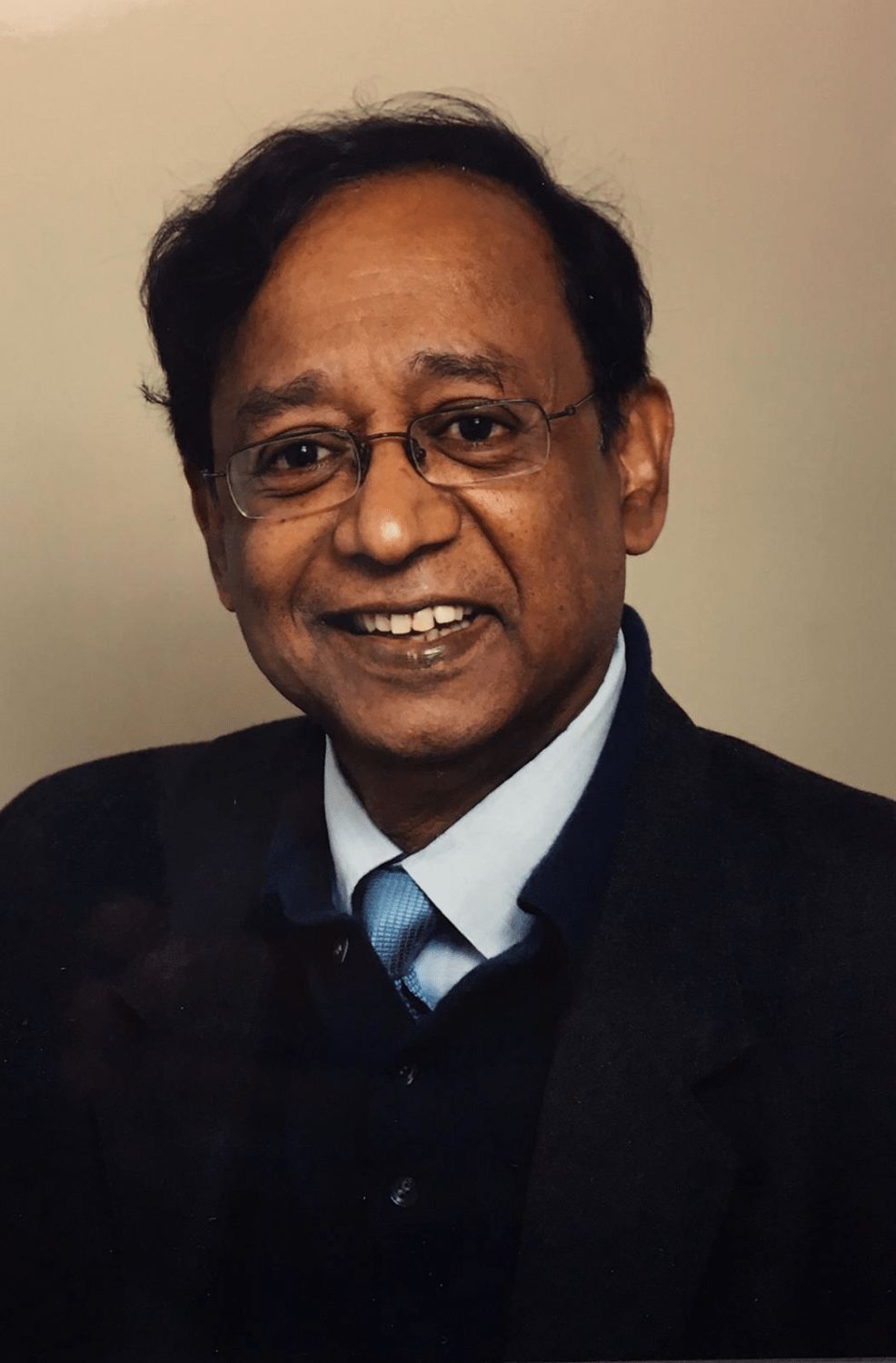 Born on 7th January 1945 in Port Louis in a family of humble origin, he went to Villiers René Primary School and was among the five top scholars in the island that went on to pursue secondary education at the Royal College in Port Louis.  At the time there were quite a few of us from Camp Yoloff who went on to RCPL.  I am not quite sure whether Villiers René made them or they made Villiers René.  Camp Yoloff was iconic and there lived in harmony the various communities that made Mauritius.  The very tolerance and closeness that there was did contribute to the broadmindedness and capability to learn for those kids.  He was a year above me and I remember he used to come top of his class from Form 1 to Form 5 every year winning the Superiority prizes plus 6 to 7 other top prizes (out of a maximum potential of 10 subjects).  That was unique.  He was favourite to win the English scholarship at a canter but, owing to personal circumstances into which I won’t go, he had good grades for the HSC Cambridge but did not make it.  Still he was in 1964 one of the 5 people in the first batch selected for scholarships to study medicine in Cairo where he graduated in 1971.  After various internships in Cairo, Mauritius and France, he obtained his doctorate at Pierre and Marie Curie University.  More notably he obtained the selective « Agrégation de Cardiologie » which is very prestigious. He also practised, taught and researched in Paris and his main topic of research was genetics and heart diseases.  In one of the conversations we had at the time, he told me that he was well on the way to determine the DNA map, which would have been an amazing achievement and a source of great pride for our country and its system of education at the time.  As he was a humble person and not given to blowing his own trumpet, I had no reason to disbelieve him.  More importantly in the 1980s he had found the relationship between diabetes and heart diseases, and only recently I was reading about some recent research coming from the USA covering that relationship.

A member of the French Academy of Medicine

But at a health conference in Europe, he met Harold Walter who was Minister of Health at the time and who encouraged him to come to Mauritius and ‘help his country’, which he did bringing his family (his wife Ula and his 2 children Damian and Hélène) with him.  He also brought with him medical equipment which he donated to Victoria Hospital (Candos as we know it) and a cousin of mine who was a nurse at the time did work with him.  She too was a native of Camp Yoloff.  There was until recently a plaque dedicated to him but for some reason it has been removed.  More importantly he introduced Cardiology as a discipline with all its paraphernalia.  From then on, the possibilities with cardiac treatment increased enormously from dilatation to heart operations.

Foreign doctors and surgeons came to the island at his invitation and that also influenced other organisations and the government to tackle heart diseases in a more expansive way.  Having created the Cardiac Unit in Candos, he still had the will and determination to pursue his researches and undertake teachings in France while he was a cardiology expert for the French Ministry of Health between 1980 and 1985 and Associate Professor of Cardiology at Pierre and Marie Curie from 1985 to 1986.  This only goes to show the versatility of the man.

It would not be irrelevant to mention that during his researches in France he developed the use of the drug ‘trinitrin’ in the treatment of stroke and ‘insuffisance cardiaque’ and the drug came into general use at hospitals all over the world.  That brought him invitations to lecture in Japan, USA, Thailand and Switzerland among other countries.  He used his membership of various international scientific organisations to propagate and persuade.

Further in 1987 he helped to set up the SSR Centre for Medical Research attached to the University of Mauritius.  Guided by a Scientific Council which also comprised 4 French professors, the researches covered heart diseases, asthma and allergies.  Prof Baligadoo also initiated a Molecular Biology Laboratory.  Further researches evolved from those institutions.

Soon after he set up the Clinique de l’Océan Indien which treated many people, including my mother.  One day while taking a walk in Caudan with him, I was astounded by the number of people who stopped him to thank him for treating either themselves or members of their family.  I myself am grateful to him for giving me 4 extra years of my mum after she had suffered a stroke.

In 2000 with the support of the University of Paris VI he set up probably the first private university, the Louis Pasteur Scientific and Medical University, which later became the Louis Pasteur School of Medicine as a result of some administrative interventions.  Many Mauritians had benefited from the 2 years offered in Mauritius to be followed in later years by studies in France.  I know for sure that he was making a loss most years, which he covered from his own resources.  As a successful and profitable publisher, I asked him why he did not close the university down as it was being a big strain on his finances; he looked at me and said that the price was worth paying as he was creating doctors every year and that they would give people good health.   That was the humanity and compassion of the man!

Unfortunately in the 1990s the Ministry of Health did not renew the permit for his clinic although later an injunction in Court overturned that decision.  It was too late and the damage was already done; he was forced to go to France where they welcomed him with open arms.  Part of a clinic, he practised as a cardiologist in the small town of Hesdin in the north but he was still involved in the Louis Pasteur Ecole de Médecine.  While he was there, he received the biggest accolade anyone practising in France could receive – he was made a member of the French Academy of Medicine, the second Mauritian to receive this honour after Brown-Séquard.  It is also worth noting that he started his clinic and the university with a minimum of capital.  Only God knows what he would have achieved if he had had decent capital behind him!  We’ll never know unfortunately!

In this obituary I am not going in depth into the range of his qualifications, which were many and very high.  But I need to mention, for the benefit of a few of his detractors, that he was a Member and Fellow of the Cardiology Associations of France, the USA, Mauritius and Europe.  If people are interested in finding out more about his achievements up to 2012, there is a booklet published in 2012 entitled ‘Exposé des Titres et Travaux Scientifiques’, which would show what a giant of a thinker he was.  If I remember correctly, his daughter Hélène has given a copy of the latter to an ex-government minister, and it is available in Mauritius.

But for me who have known him practically all his life, the saddest thing is the lack of appreciation from certain quarters in Mauritius of the achievement of one of the most loyal and committed sons of the country.  In the 1970s I was working on the reprint of a book, in which there was an article by the famous linguistician, Roman Jakobson, entitled ‘the generation that squandered its poets’ (covering poets in the Soviet era of the 20s and 30s, especially Mayakovsky, and Pasternak) and this reminds me of his experience when working in Mauritius.  We did not know how to use Dr Baligadoo for the benefit of the nation.  Jun, as he was known to his friends, was also a great lover of literature, especially the poetry of Omar Khayyam, as well as an opera enthusiast.  He was also fluent in Arabic.  In short a very cultured man he was.  He could turn his mind to any subject and he would master it in no time.  I would have loved to publish him.  Having said that, he had published a book entitled, ‘L’Inégalité Devant La Mort’, which revealed his social conscience.

In June 2016 he was elected Chairman of The Rotary Club of the Hesdin region and his list of objectives read like a progressive and humanist manifesto.  He was also made Honorary Citizen of Hesdin where he practised and he was buried there on Friday 4th January 2020 with all the honours.

I only hope that there are people who would be inspired by his life and that they would go on to serve humanity as he had done during his lifetime, whether in Mauritius or in France.  I consider myself very privileged to have been one of his closest friends and to have benefited from his kindness and expertise. BUT THE BIGGEST TRAGEDY IS WHAT WAS MAURITIUS’ LOSS BECAME FRANCE’S GAIN.  Anyone cares?