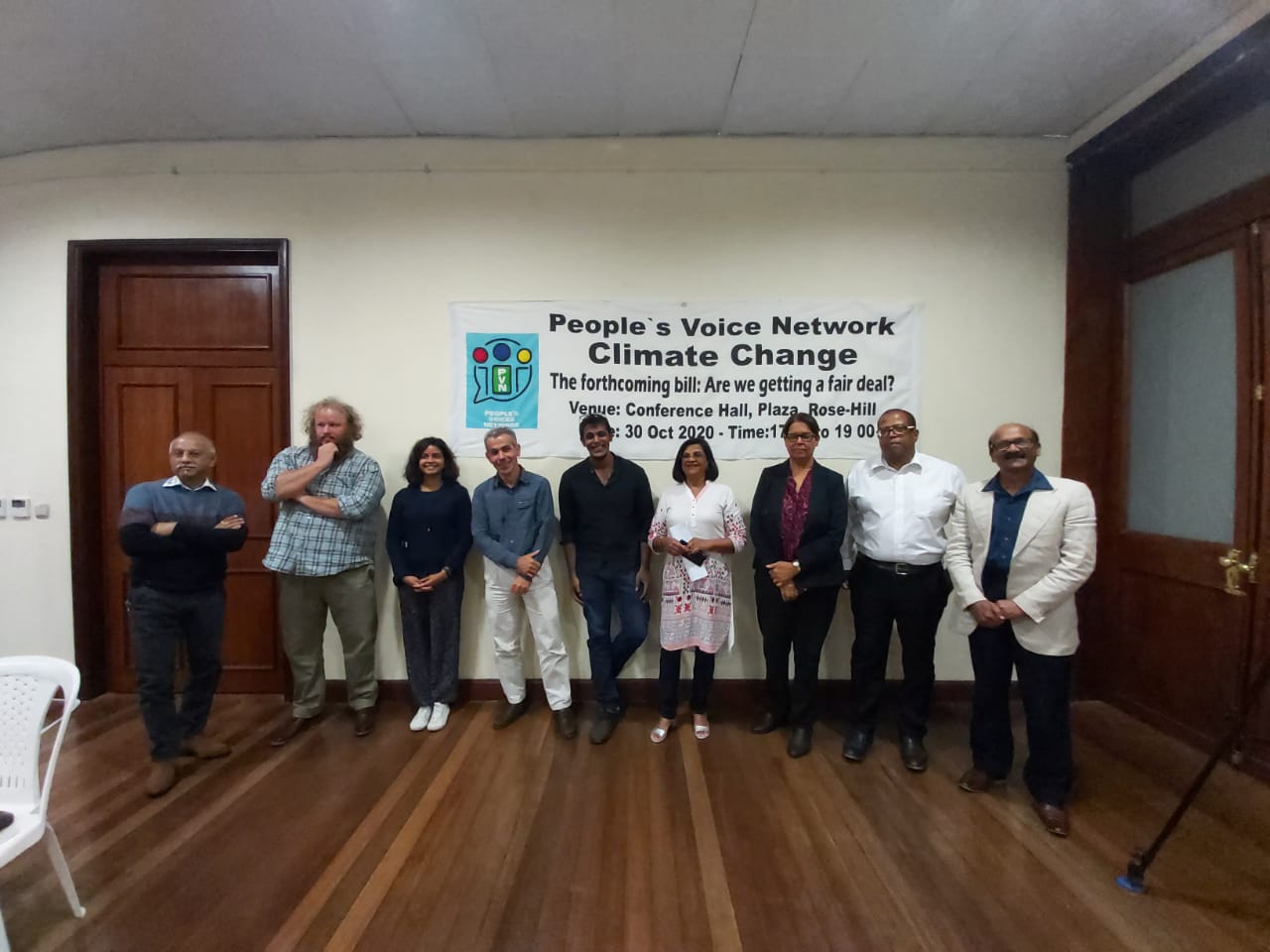 People’s Voices Network (PVN) is of the view that the citizens of Mauritius have the right and duty to contribute to debates of national significance. Participatory democracy and counting people’s ‘voices’ in, are key to forging consensus, building resilience, ensuring recovery and move forward as a nation in these challenging times. Since there is very little opportunity to engage in broader civil society conversations on key societal issues, PVN, newly established NGO, took the initiative to organise a public debate on the theme: ‘Climate Change – The Forthcoming Bill: Are We Getting A Fair Deal’?

While the Climate Change Bill is long awaited and therefore welcome, it lacks ambition, foresight, and remains too parochial. Also, too much power in the hands of the minister (Regulation: part V11, Miscellaneous s 29) is dangerous. Establishing an appropriate legal framework requires a holistic approach, a shift away from a bureaucratic/administrative approach to a lean, science driven, problem-solving disposition.

The Explanatory memorandum notes ‘that the main object of the bill is to implement, with a view to addressing the adverse effects of Climate Change and developing Mauritius into a greener economy, the obligations of Mauritius under the United Nations Framework Convention on Climate Change, the Kyoto protocol, the Paris Agreement and any other related instrument on Climate Change.’ Is the African Commission’s Resolution ACHPR/Res 153/09 on Climate Change and human rights, part of what is being referred to as ‘any other’? And if so, how demeaning a way to put it!

Moreover, the bill does not tell us what the adverse effects of Climate Change actually are. It speaks of making Mauritius ‘greener’. How can an economy driven by some 80% of fossil fuel, generally described as a brown/grey economy be made greener?

The bill speaks of adaptation and mitigation, however a reading of the text evokes a sense of incoherence and omissions.

(a)Formulated in accordance with UNFCCC and any other related instruments; and

The other major lacunae is that there is absolutely nothing on Climate Justice in this bill. Not one word on the latter in a 40-page document. And yet achieving Climate Justice should be at the heart of any sensible climate law. Climate Justice begins with the idea that the adverse impacts of a warming climate are not felt equitably among people. The poor and vulnerable are the worst hit. Research has established that women and children are disproportionately affected, often constituting the majority of climate refugees.  The only one time that gender is mentioned is in para 2 (m) under part 3, entitled Department of Climate Change. It notes that the department will ‘commission studies on Climate Change, taking into consideration, inter alia, human rights, cultural heritage and gender issues.’ Then twice in the schedules, when referring to the Ministry of Gender Equality.

Younger generations feel they are being cheated. The manner in which sustainable development is treated in the bill is not sufficiently in tune with the perspectives of climate activists, demanding a more climate just and inclusive world. Without wanting an intergenerational conflict and acknowledging that Climate Change concerns the whole of humanity, there is an urgent need to pay attention to the excessive consumption and lavish lifestyles, particularly of political elites, which are notoriously carbon intensive. Failure to encompass environmental and ecological dimensions can render any climate law meaningless.

Linked to the above, it is also noted that unless we have a development paradigm, infused by ecological economics and human centredness, there is little that a climate bill/law such as the one being proposed, can do to protect the lives of citizens from the adverse effects of Climate Change. In discussing development paradigms, the entire Republic of Mauritius must be considered.

Except for Rodrigues, the other islands get no mention in the bill. Geostrategic/political interests in the Indian Ocean have huge implications for Climate Change and cannot be ignored. Is the omitting of other islands such as Agalega and Chagos done to facilitate the continuation of opaque governance at the cost of potential climate refugees in the future?

Three of the seven parts of the bill are about structures that will be set. While addressing Climate Change impacts is more efficient when the process is less cumbersome, this bill in fact adds unnecessary layers to the process. The bill proposes the setting up of a Climate Change Council which will be chaired by the PM, with a pool of 21 ministers as members. This resembles the making of “a pseudo cabinet”. PVN views this as a sheer waste of resources. The PM should instead schedule special cabinet meetings and/or set up appropriate parliamentary committees, thus reflecting seriousness and political will. Moreover, that the bill does not provide for the inclusion of the Minister of Environment in the Council speaks volumes!

The other structure proposed is the setting up of a Department of Climate Change. The question that arises – Do we need a bill to create a department ? There is already a “Climate Change Unit” in the Ministry of Environment.

The third structure proposed is the Climate Change committee. Only one NGO member chosen by the minister will be part of the 33 members of this committee which will be more of consultative nature as it will only coordinate and sometimes make recommendations with respect to Climate Change.

PVN believes that section 26: ‘Protection from liability’ of the present bill should be struck off. Providing immunity to the minister and other officers in case of failure to properly address Climate Change and other linked environmental issues should not be tolerated.

On a brighter note, PVN believes that the amendments to sections 16 and 18 of the Environmental Protection Act 2002 are positive, providing additional safeguards to the existing provisions but should be mandatory. The word “may” needs to be replaced by “should”. The way that the amendment is being proposed can open the gate for favouritism, nepotism and corruption. Also, amendments proposed to the Pas Géometriques Act and the State land Act seem to go in the right direction. However, Climate Change being so complex and crosscutting, it makes more sense to have a single comprehensive umbrella law.

PVN acknowledges the fact that not all the recommendations made are directly related to the bill but without due consideration to these, the battle against Climate Change will remain an uphill one.

1. Inscribe the ‘Rights of Nature’ in the Constitution and embed “Right to be protected from Climate Change impacts” and in so doing, enhance the preservation of the Natural Capital as a legacy to the next generation.

2. Embrace an innovative development paradigm – away from the logic of profit accumulation to one which is infused by ecological economics and human-centred development, with emphasis on mitigating the carbon footprint.

3. Revisit the educational curricula, particularly at tertiary level –  to ensure that the teaching of economics goes beyond neoliberal economics, finance and banking, to encompass ecological and solidarity economics so as to impact on emerging policy makers.

4. Mainstream gender in all Climate Change related debates and policies. Gender lenses should be applied to all adaptation and mitigation measures to promote climate justice.

7. Encourage the setting up of an independent Civil society – a “ Climate Change Commission”. The latter will allow local NGOs to be fully involved in Climate Change actions to complement, sustain, as well as redirect government actions when necessary.

8. Climate Change lenses should be applied to regional cooperation. Effective forms of collaboration should be established with regional/subregional blocks such as SADC, COI, COMESA, as well as the African Union.

10. Licences of all boreholes providing irrigation water should not be renewed and be used only for domestic purposes. The use of recycled water, rain water or river water for agriculture should be made possible.

This bill will, despite its limitations, more than likely go through as a result of the tyranny of numbers/the majority in parliament. However, in its present form, there is little it can do to meet the UN Sustainable Development Goals, particular goals 13,14,15 and 17. Having a law which does not adequately protect ‘our common home’ is problematic.

A Disaster In The Making…?