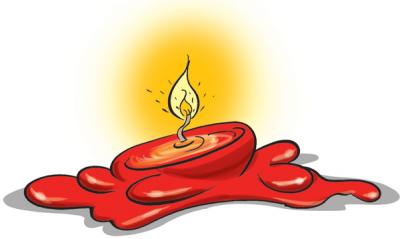 To say that the past week has been full of surprises and twists and turns would be an understatement. While the country waited with bated breath to know what would happen in the case that had gripped the nation, the main players played it cool, knowing that whatever they decide, whatever they plan to do, however they will ‘punish’the transgressors, they will be virtually untouchable. The people will talk, the people who have put them there will react ; will vent their anger on radio channels and interactive newspaper websites. To actually know whether the leaders give a damn about the people’s voice almost amounts to the impossible. Meanwhile, during the waiting game that the whole nation is playing, life and its everyday grind goes on for us, the people.
All media forms have given so much attention the ‘scandale du siècle’and its subsequent episodes that it would seem the rest of the country has come to a standstill. However, as we know, that is not the case. The breadwinners still have to go out every morning, brave the gravity-defying traffic jam, with all its pollution and stressed out drivers. They still have to think whether the pay packet they are bringing home at the end of the month will be able to cover the expenses. Will the grocery bill this month show an increase again, as it does every month ? What expense should be foregone to be able to do that little bit of saving ?
The mother will still fret when she is sending her child to the corner shop. Is the child safe from predators ? While she craves for the child to be independent, did she make a mistake by sending him there ? She also has to worry about the adolescent gone for tuitions. Has that child fallen prey to bad influence ? Is he indulging into positive friendships or is he experimenting into things that can potentially send him in a downward spiral and join thousands of people who are already there ? Since exam dates for CPE have been announced this week, now the mother has another worry on top of everything else. Is her child preparing as he should to secure the A+ to get into the coveted school ? After all, if the child weren’t, wouldn’t it be a shame in front of family and friends ; who cares about what power players are doing in their own twisted little world ?
The less than fortunate doesn’t have the time to think whether the l’Alliance de l’Avenir still have an avenir as he is thinking about his very near avenir : does he have anything to put on the dinner table that night except stale bread, some sardines and water ? When will his shack be equipped back with electricity so that his kids can have some semblance of normality ? When will the discrimination against him and his kids stop so that they can find a decent job and make some living ? After all, if any accident happens in his house, immediately the blame will be that he was too lazy to do something to better his situation. But does anyone really know or care about his day-to-day reality ?
While the pensioner is avidly reading about anything pertaining to the ‘we go but we stay’serial, the worry that his pension might not be able to cover his medical expenses is still at the back of his mind. Will he have to wait for half a day again when he goes for his appointment at the hospital this month ? Will he have to make do with the harassed staff again and bear the brunt of their stress ? Will his kids have time to come and visit him this weekend or are they too taken with their own day-to-day grind ? The youngster waiting for a promised job is thinking : maybe I should try my luck abroad, after all what can I expect from a country that is turning into the sets of a bad soap opera ? Without the backing of the person I asked, I wouldn’t be able to get the job since his own ‘natte’is in a ‘coup de vent’with all that has happened last week. Maybe the answer for me is to look for greener pastures, wherever that may be for me, judging by the example coming from the top, everybody is thinking only of himself.
Everybody is very high on anticipation this weekend. Something big is going to happen as soon as a certain plane touches down at the Mauritian airport. Is it going to be a big explosion or a big ‘petard fizet’ ? In any case, whatever happens, whoever stays or goes, whatever way the musical chair plays out in Parliament, for us, the people, nothing much is going to change. The only thing that we can be sure of, and I really mean only, is our knowledge that we are not imbeciles, we are not a lethargic people. We react ; we talk. Let’s hope that we do not need to light up a ‘la bouzi rouz’to wait for our voices to be heard. 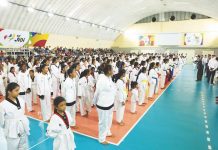 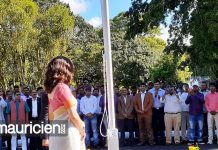 (Republic Day) Shrimati Nandini Singla : « It’s hard to believe that I am in a foreign country »