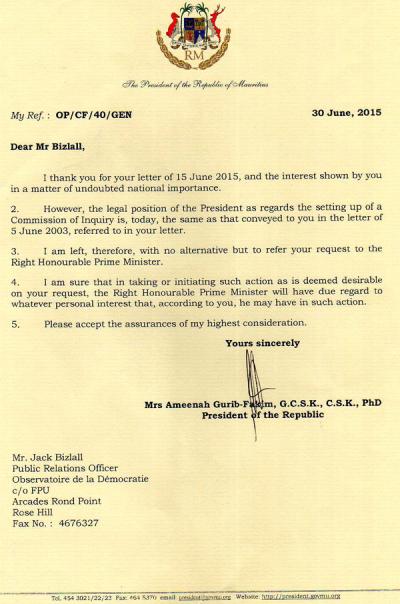 Sir,
I addressed a letter to the President of the Republic on 15th June 2015 (enclosed) and copied same to “Le Mauricien” (Page Forum), in which I requested that a Commission of Inquiry be set up on the basis of the following considerations:
1. Des millions et des millions de roupies ont été données au MMM, au MSM, au PMSD et au PTR, entre autres, pour financer leurs campagnes électorales ;
2. Que des sommes faramineuses ont été remises à des leaders et non aux trésoriers de leurs partis politiques et qu’une bonne partie de ces sommes est restée dans leurs coffres personnels principalement pour leur utilisation personnelle, pour l’achat de bâtiments, imprimeries, voitures, etc.  De l’argent a aussi été utilisé pour solliciter des votes.
3. Une commission d’enquête s’impose pour protéger notre système électoral et notre démocratie et pour empêcher que nos dirigeants politiques soient corrompus par des entreprises et des individus sans vergogne.
In her reply to the Observatoire de la Démocratie, the President wrote four important things:
1. That the matter is of “undoubted national importance”.
2. That the legal position of the President “is the same” as that conveyed to me in 2003.
3. That she has “no alternative but to refer” my request to you as Prime Minister.
4. That she is “sure that taking or initiating such action” (the setting up of a Commission of Inquiry) you “will have due regard to whatever personal interest”  that according to me, you “may have in such action”.
Sir, we should no more play hide and seek regarding the setting up of a Commission of Inquiry with a view:
1. To establishing the sources of funding of political parties and the amounts so received that have been diverted by the political leaders for their private/personal use.
2. To identifying the political leaders and donors (individuals or companies) who have been responsible of  illegal transactions and who have flouted the constitution concerning the limits of expenditure at general elections and/or who have received such amounts against: 1) promises for appointment as candidates, ministers, ambassadors, or any public office and 2) material gains such as public contracts.
3. To removing the word “leader” in the First Schedule of the Constitution (is authorised to discharge the functions of leader of the party) and to replace it by the word President.
4. To amending the constitution for the registration of political parties with objectives, structures and elective system in line with the Constitution.
5. To seeing whether the State should finance political parties in as much as the dissemination of their political programs are concerned, including newspapers, posters, pamphlets, etc.
Should you consider that it is not important that a Commission of Inquiry be set up, I will, on behalf of the Observatoire de la Démocratie, ask the President of the Republic to proceed with the setting up of that Commission under the second part of Article 64 (1) of the Constitution referring to the term “in his own deliberate judgment” in an article which reads as follows:
“In the exercise of his functions under this Constitution or any other law, the president shall act in accordance with the advice of the Cabinet or of a Minister acting under the general authority of the Cabinet except in cases where he is required by their Constitution to act in accordance with the advice of, or after consultation with, any person or authority other than the Cabinet or in his own deliberate judgment”
If ever my interpretation of the Constitution is erroneous, it would then be the duty of the Leader of the Opposition to come forward with a motion in the National Assembly in view of amending the Constitution, in order to enhance the power of the President of the Republic to set up, on her own, a Commission of Inquiry pertaining to any matter involving directly and indirectly the Prime Minister.
Yours sincerely,
This 6th July 2015 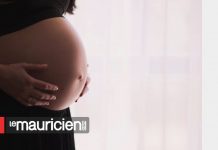 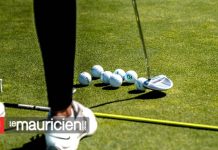 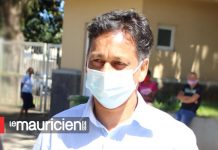