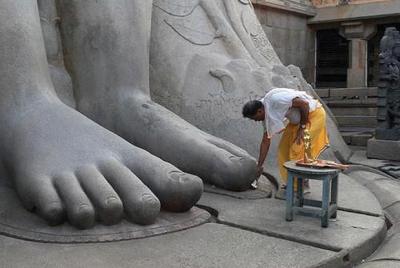 In the evening of Thursday 12 June 2014, the MBCTV showed images of our Prime Minister attending a ceremony during which he laid the first stone for a new university campus at Pamplemousses. As soon as the Prime Minister stepped out of his car, an old man was made to offer him a garland of flowers after which the same man bent down and touched the Prime Minister’s feet. Another elderly gentleman clad in a red coat went down on his knees and also touched the Prime Minister’s feet while the Prime Minister was entering the hall where the ceremony was being held. Following on the example set by the new Indian Prime Minister, Narendra Modi; Dr Navin Ramgoolam should ban such gestures because these smack of sycophancy (lèche-bottes or roder bout in Mauritian language).
In Indian culture, the touching of the feet, called Pranama or charana-sparsa, is a show of respect. When greeting, children touch the feet of their family elders while people of all ages will bend to touch the feet of a great guru, a deity, or a Deva (God such as Rama and Krishna). According to the Indian journalist Amrita Malik, politics in her country has nowadays changed the concept of touching of the feet turning it into a meaningless ritual. To illustrate her point, she states that it is quite common to see on television a dignified elderly village leader touching the feet of some proud young politician from an urban background. Logically, the young politician should have touched the feet of the elderly village leader. Still according to Malik, Pandit Jawaharlal Nehru, the first Indian Prime Minster from 1947 to 1964, used to react very angrily when people tried to touch his feet. Nehru’s school of thought considered it immodest and arrogant to allow people to touch his feet.
At the first meeting of the elected representatives of his party on 6 June 2014, Narendra Modi instructed all those present to stop touching his or other senior party leaders’ feet while greeting them. Senior leaders said the suggestion that they stop touching the feet of other leaders is a bid by the Prime Minister to end what is seen as a culture of sycophancy and currying favour. Commenting on the initiative of Narendra Modi, Subhash Agrawal wrote the following in the 12 June 2014 edition of The Telegraph: “Leaders of other political parties should follow Modi’s example and create a political atmosphere where sycophancy is rejected. These things cannot be implemented through the law; therefore, political leaders should exercise their will in bringing about this change.”
Let us hope that Subhash Agrawal’s message travels over the seas and reaches our country where, to Mauritians with Indian ancestry, touching of the feet of politicians has another major inconvenience besides the arrogance that it implies as well as its culture of sycophancy and currying favour. Touching of the feet of politicians is a source of embarrassment for them in front of other sections of Mauritian society because the gesture, which should have been kept within family circles and temples, is being trivialized and turned into an object of ridicule. Therefore, Dr Navin Ramgoolam should at the earliest, exercise his will in banning the touching of his feet. 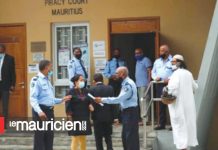