On answering the door, wearing matching colours, a group of three people stand smiling. For a vote, they promise to do things differently; for a better society and for a better

economy. Sounds promising enough. But on inquiring where does the current GDP stand, what measures can specifically attract more investment and reduce debt, how to encourage urban regeneration, frictionless trade and increase business fluidity, their smile fade to give way to political speeches on how bad their opponents have performed at specific points in time. My questions remain unanswered. Their time is over. They move to the next door for another 5 minute-exchange in the hope for a vote for a 5-year mandate.

The underlying issue here is not the trade of 5 minutes for 5 years. The issue is the inability to share the right information with the right person. The issue is also the failure to understand that door to door political campaigning is simply no longer required in today’s digitally connected era; at least not for the youth…

On this realisation, and pondering further, the political campaign is, in essence, a process riddled with inefficiencies in respect to resource management, information coordination and financial investment. Instead of using banners, pamphlets, and an army of hired and motivated foot soldiers to blindly canvas unknown terrains, we rather need to invest in other, more effective, means. On this, Big Data offers insightful revelations.

In 2013, Obama was coined as the Big Data President, where for the first time in contemporary political campaigning, elections and referendums were won by carefully and personally crafted propaganda. In 2016, this is further exploited in the United States – for the benefit of Trump, where voter’s data, meticulously mined, were profiled by socio-demographic categories; leading to emerging trends showcasing voter preferences and habits. We moved from the usual habits of mass propaganda to microtargeting campaigns; using analytical skills coupled with digital marketing to ensure that messages resonate with every voter. Messages are surgically reworded to match the nuances of every region, community, and personal beliefs. In the same year, we hear of Cambridge Analytica’s role in Brexit. Their slogan ‘We find your voters and put them into action’ perhaps best depicts how Big Data is no longer passive information, but a tool – even a weapon, for manipulating public consensus.

Last week, prior to the official unveiling of election candidates, we saw a surge of new Facebook Pages, new platforms for communication where each post is sponsored. Facebook does a wonderful job at this – aiding candidates in targeting specific demographics. However, when seeing targeted Facebook posts and watching live broadcasts from terrain events on the same platform, we see a discrepancy: differing information, ill minded personal attacks, and a series of fake news coming from all directions. All of which, combined, discredit candidates and may have the reverse intended effect. Research showed that fake news, principally propagated through social media, targeting the U.S. presidential campaigns of 2012 and 2016 may have had little effect on political beliefs. As its contributing factor to vote swings is further researched, one question emerges from the preliminary findings: if social media coupled with fake news, have debatable impact, why is it believed that Facebook has such a unique influence? The answer may lie in the fact that candidates may be targeting undecided voters; principally the youth. This youth, however, is not dubious. They quickly see through fake news, news timings and ill minded voter influencing campaigns. So, why risk a potential next mandate and tarnish a professional reputation for the sake of such lowly tactics?

If you made it this far into this article, you’re also wondering why is there a discrepancy between well-crafted sponsored Facebook posts and messages from live videos shared on the same platform? Surely, our aspiring leaders must see that there is an investment need not only in aesthetic appeal but also that in communication; where they can be informed on what information to share to the right audience.

The political gathering is an interesting landscape and anchored in our society as a platform for ill minded talks and of verbal profanities against opponents. If this previously worked, does this still apply with an educated audience?

Recognising this aid in questioning the inefficiency and wastage of financial campaign resources in printing banners and pamphlets usually aimed at satisfying a crowd which is already won. Really who goes to a ‘meeting’, if one is not already voting for said party? Is, then, the political gathering only entertainment? It surely sounds like a hard act for candidates shouting in microphones – blissfully unaware that those instruments are used to amplify their voice…

One principal aspect missing in of all this is the view of political campaigns as a business enterprise. Investment need to yield result! In contrast, strangely, the political campaign somehow looks like it operates in a vacuum of capital volatility threaded with conflicting and shifting identities. Surely, this must be known, but looking at the stakes, why is it hard to change?

For example, why do we need an army of 50 foot soldiers per month per region, if we can achieve better results with only a team of 4?

Let me explain. Should we know, for example, where young female voters between 18 to 35, earning between Rs 15 to 20 thousand, would most likely be in specific areas, and where in a different time of the day, elder retired male voters are active, then messages can be better tailored to suit this contrasting demographic. To achieve this, a mobile team can be utilised to broadcast those meticulously crafted messages through visual means (also mobile). Again, you do not have to motivate those who are already ready to cast a vote in your favour, you just need to motivate those who hesitate. And this is not just a matter of buying Facebook ads or sponsoring posts. We need groundwork designed specifically to respond to data analytics. Its use will allow reliable prediction and aid in performing informed (and better) decisions. What we need is no longer political agents who are tasked with dubious roles. What we need here is a team of data scientists and strategists, aiding in crafting the most statistically successful campaign model and evaluating the success of slogans, while taking into account a range of indicators: Age, Sex, Salary, Education, Profession, Residential Address, Voting Patterns, Movement Trends, etc…

It is not too late, and I can see how the processing of datasets obtained, or mined, from a handful of local companies can provide the insights required for surgically crafting campaign propagandas. I won’t say which ones as the question of ethics remains… But again, the regulatory infrastructure for manipulation of data is not fully laid in Mauritius. So, will political parties surf on this grey area in favour of manipulating public perception, or is this still too novel for the current context? 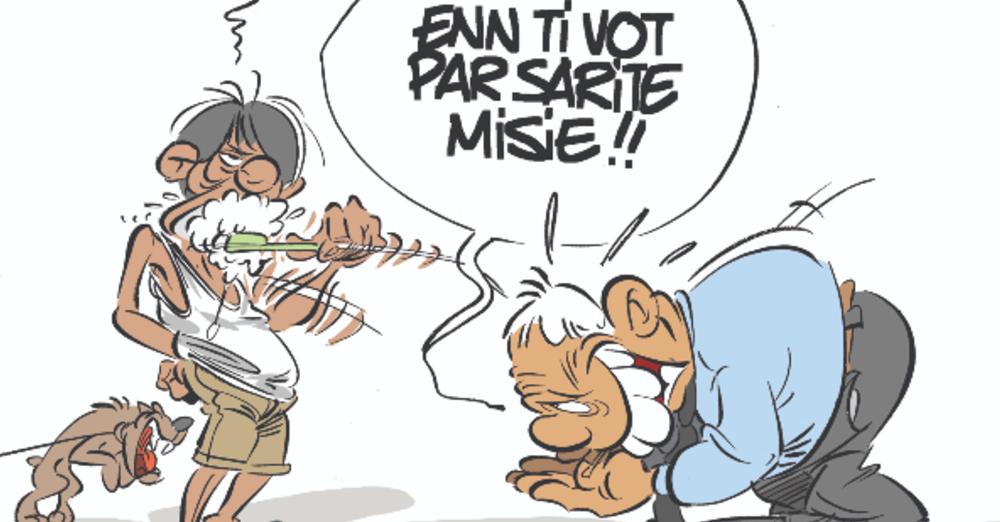 My scientific training tends to guide me into the recognition that one has to understand contextual dynamics prior to crafting a solution. Didn’t Sherlock Holmes say that ‘it is a capital mistake to theorise before one has data’? In contrast, our context is in a constant morphing state, but the adopted solution (being the political campaign) seem to function in its own vacuum. There is a discrepancy between problem and solution. If the political campaign is the primary act of showing how good of a governing entity we can be, then is it not time to lead by example and show how an intelligently crafted political campaign can gain national consensus? Is it not time to lead this change? More so, in a time where innovation seems to be the buzz word.

But then, what do I know? I am not a politician. I never had the opportunity to vote. I am among the new class of voters that doesn’t feel the need to go to ‘meetings’, fail to understand the meaning of a ‘baz’, and do not understand why political candidates suddenly adopt a healthy walking routine prior to elections…

I am among the 26% that failed to show up in the last election, but among the many thousands that will walk, for the very first time, towards a voting centre on the 7th November. We are now an enlightened crowd, eager to work towards economic and social prosperity, with respect to our fragile ecosystem. We are ready to choose leaders that show credibility and true leadership, and the campaign stage is where this is demonstrated. In three weeks, my vote, just like thousands of others, will definitely not be based on a 5-minute door interaction, influenced by fake news, or by the failed entertainment value of illtreating other people.

Is your campaign effectively targeting this group?