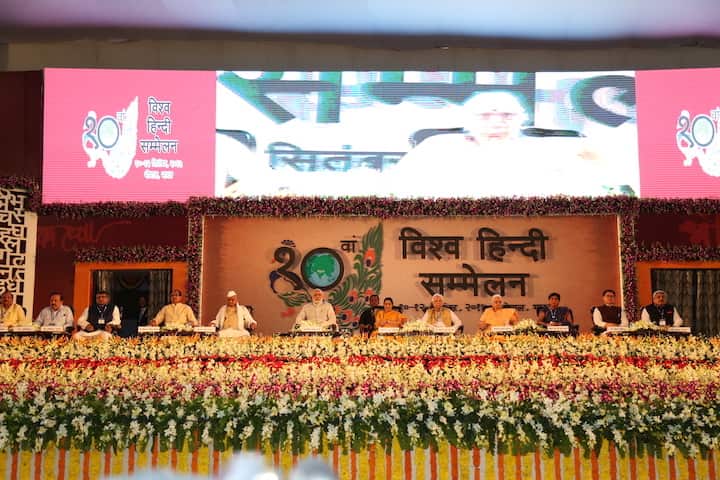 The 10th World Hindi Conference was held in Bhopal, India, from 10 to 12 September 2015. This year’s International Conference theme was ‘Hindi Jagat: vistar evam sambhavnayen,’ (Global Hindi: Expansion and Future Prospects) within the framework of the Indian Diaspora. The status of the Hindi language and the progress made in the preservation and promotion of Hindi through Indian literature in the Indian Diaspora was the focal point of this conference.

The conference proudly presented an opportunity for high level professionals in Hindi drawn from across the world to gather, discuss and share cutting-edge, creative and innovative practices adopted nationally and globally at this three-day event in Bhopal, India. Mauritius sent a strong delegation. Countries as far as Trinidad and Tobago in the Atlantic Ocean, the Fiji Islands in the Pacific Ocean, several delegates from Europe, America, Africa and Asia gathered to share country experiences.

The conference gathered a unique assembly of people from across the world, a deep bower of emotions with diverse linguistic, cultural and spiritual experiences. Several countries present had experienced slavery and the indenture system. However, it remained landless, defenceless, denied police protection, as well as political and civil rights for quite long. Yet, it succeeded in building a prosperous nation. We are all proud of our achievements with different parts of our history to anchor our pride in.

The conference proceedings included high quality Keynote addresses by Shri Narendra Modi, the Prime Minister of India, Shrimati Sushma Swaraj, Minister of Foreign Affairs, India and a powerful presentation by Leela Devi Dookun-Luchoomun, Minister of Education of Mauritius who was also the Special Guest of the conference.

As soon as we landed at the Raja Bhoj International Airport in Bhopal, one could experience the flavour of Hindi in the atmosphere. From there till the venue of the conference, crossing the round-abouts, all the way along we could see banners, posters and billboards of famous Hindi torchbearers and literary figures such as Goswami Tulsidas, Saint Kabirdas, Munshi Premchand, Sachidanand Vatsyayan Agyey and others. It seemed that the whole city of Bhopal was celebrating the festival of Hindi.

The venue of the Conference was Lal Parade Ground, where Makhanlal Chaturvedi Nagar was established and a gigantic tent was erected to accommodate more than 5,000 delegates from 39 countries for the three-day conference. The various conference cells were named after renowned Hindi writers such as Subhadra Kumari Chauhan, Pradeep, Dushyant Kumar, Kaka Saheb Kalelkar and others.  The welcome hall was made vivid by the portraits, profiles and messages of legendary Hindi writers such as Hazariprasad Dwivedi, Makhanlal Chaturvedi, Bharatendu Harishchandra, Maithilisharan Gupt, Meera Bai, Jayshankar Prasad, Suryakant Tripathi Nirala, Mahadevi Verma. Sumitranandan Pant, Agyey, Muktibodh, Harivanshrai Bachchan and others.

All the facilities were accessible and volunteers were ever ready to help. It can be said that the famous code of conduct of the Indian culture which is ‘Atithi Devo Bhava’ (guests are like deities) was put into practice.

Shri Narendra Modi, the Prime Minister of India, inaugurated the 10th World Hindi Conference on 10 September 2018 in the Ramdhari Singh Dinkar conference Hall in Bhopal. On the dias, along with several dignitaries, were present Shrimati Sushma Swaraj, the Minister of External Affairs, and the convenor of the conference, Honourable Shri Shivraj Singh Chouhan and the Chief Minister of Madhya Pradesh.

The Prime Minister of India, Shri Narendra Modi said that the status and importance of the Hindi language were increasing day-by-day. He also emphasized that languages are not inert; they are living and they have the power to transform and mould people, society, culture and a whole civilization. He clearly said that according to philologers there are actually about 6,000 languages in the world and if they are not given due attention, 90% of them will disappear by the end of the 21st Century. He believed that considerable effort should be made for the development of all existing languages including Hindi. He also emphasized that in this age of Information Technology, three languages that will play a vital role in the future digitalized world are English, Chinese and Hindi. In his opening speech, while talking about the development of Hindi in Diaspora countries, the Prime Minister referred to the significant role played by the World Hindi Secretariat based in Mauritius. He also related to the love and passion in Mauritius for Hindi by recalling the Pravasi Bharatiya Diwas held in Gandhinagar, Ahmedabad, where some 150 books in Hindi by Mauritian writers were exhibited.

Shrimati Sushma Swaraj, on her part, said that this conference was a milestone in the history of the Hindi language. She emphasized that the previous nine Hindi conferences were dedicated to Hindi literature and this was for the first time that the focus was on Hindi language that communicates the whole civilization to us all.

Three books and magazines were launched during the opening session. They were presented to the Prime Minister by the Chief Editors as follows: Gagananchal Visheshank by Dr Ashok Chakradhar, Pravasi Sahitya-Johanesburg se Age by Dr Kamal Kishore Goyanka and Sammelan Smarika a special issue dedicated to the conference by Shri Manohar Puri.

During the academic sessions papers based on the following 12 topics were presented within the four parallel sessions:

Hindi in the foreign countries: problems and solutions, Hindi in Administration, Hindi and Science, Information Technology and Hindi, Hindi and other languages in the judiciary, Hindi in the indentured countries, Hindi in non-Hindi speaking states, opportunities of teaching Hindi in foreign countries, facilities given to foreigners to study Hindi in India, problems and solutions for publications in Hindi, Hindi Journalism and use of error-free language in the Hindi media, Hindi and Children’s literature.

Reports were presented and discussed after every academic session in which the Mauritian delegates participated actively. A daily Conference Report, ‘Sammelan Samachar’ was issued to keep all the participants informed about the discussions, progress and recommendations.

A regular feature of the World Hindi Conference is the Award Ceremony. Twenty Hindi promoters from India and twenty from foreign countries were awarded for their distinguished services in the field of Hindi. It was a unique moment of happiness when our two awardees from Mauritius received the Vishwa Hindi Samman. They were Shri Ajamil Matabadal and Shri Gangadharsingh Gulshan Sooklall. The other recipients of this prestigious award were from the United States of America, Canada, Germany, Japan, South Africa, Trinidad and Tobago, Fiji, Belgium, Russia, Sri Lanka, Saudi Arabia, Surinam, Australia, Hungary, Lithuania and the United Kingdom.

The Exhibition cell was named after Somduth Bukhory, a prolific Mauritian writer. The exhibits and books depicted the grandeur of the Hindi language. For the first time, private companies involved in information technology like Google, CDAC, Microsoft, Apple, Bharatkosha and others participated and projected their partnership in the promotion of Hindi.

After the academic sessions, late in the evening, several cultural programmes were presented. On the first day, beautiful vocal and instrumental renderings of various states in India were presented. On the second day, a one-hour dance-drama entitled atha Hindi, aesthetically depicting the evolution of Hindi from the beginning till date was beautifully staged by several artists.

A soul-elevating Kavi Sammelan, that is a poet’s meet was organized by the Indian Council of Cultural Relations.

After this three-day event, the conference ended with an official closing ceremony. Shri Rajnath Singh, the Central Home Minister of India, was the Chief Guest and he said that Hindi has a prosperous future. It has all the necessary criteria to become one of the official languages of the United Nations. He praised the indentured labourers and their progeny for having sustained and preserved Hindi in spite of adverse situations.

At the end, the reports and resolutions of the 12 academic sessions were presented, and the recommendations of the 10th World Hindi conference were as follows:

First, a special analytical committee comprising high-caliber Hindi professionals, will be constituted by the Ministry of External Affairs, India, to assist in evaluating and constructing meaningful feedback on creative and innovative practices in diverse settings nationally and globally, and make recommendations that would be forwarded to the concerned Ministries for future actions; and second, the 10th Conference on Hindi in Bhopal which provided a platform for taking cognizance of new ideas, unanimously agreed to hold the 11th World Hindi Conference in 2018 in Mauritius.

The 10th World Hindi Conference was a memorable, powerful and great celebration of Hindi. It provided a unique opportunity for Hindi professionals together with a range of diverse audiences from across the globe to gather and share ideas and to reflect on big ideas for change and innovation.  It has paved an elevated yardstick for the forthcoming 11th World Hindi Conference to meet new challenges.

The active engagement of high-caliber experts and influential Hindi professionals from across the globe, will discuss some key challenges and push forward the potential directions for the further preservation and promotion of the Hindi language. Mauritius stands at the crossroads of several languages drawn from India, England, France and China which are a part of the educational curriculum. There are powerful interconnected challenges running through these languages and the maintenance of an equitable, cohesive and productive society has to reckon with them. The 11th World Hindi Conference will be also a great opportunity for each country to consider the best way forward in the light of the linguistic challenges it faces.