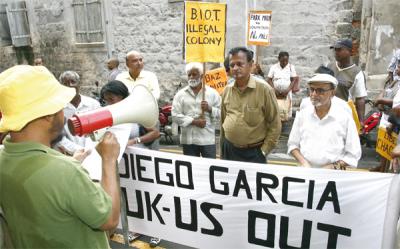 How many Chagossians want to go back to their homeland? Do they want to go back for good or on temporary visits? What are their lifestyle expectations on the Chagos Islands? These are some of the questions Chagossians in Mauritius, Seychelles and the UK will have to answer to a group of KPMG consultants who will arrange meetings with them as from next month.
In March 2014, the British Indian Ocean Territory (BIOT) Administration commissioned KPMG to carry out a feasibility study for the resettlement of the Chagos Islands. The feasibility study has now started and is due to finish in January 2015, when a report will be published. KPMG will then propose different possibilities for the resettlement of BIOT based on three options:
·      A small-scale resettlement which makes provision for a limited number of people, whose livelihoods could be supported in a number of ways, for example the management of the Marine Protected Area, artisanal fishing or employment on the US military base on Diego Garcia.
·      A large-scale resettlement with economic opportunities built around tourism and/or commercial fisheries. This form of resettlement would require infrastructure development on the outer islands of the Archipelago in order to provide adequate support services, such as education and health facilities.
·      Limited stay or seasonal returns which would require some limited investment in infrastructure and facilities in order to enable Chagossians to return to the islands for occasional visits.
Two rounds of consultations will take place in June and October. The first consultations will focus on gathering information which will then be confirmed, cross-checked and verified during the second consultations later this year.
In the meantime Chagossians in the UK are being invited to think carefully about their responses to the questions they will be asked. An awareness campaign is being organised by different Chagossian organisations that have come together to explain the importance and significance of the feasibility study to the community. They have the support of a group of volunteers, including British historical novelist Philippa Gregory.
These consultations represent something of a breakthrough. It is in fact the first time that the UK government has consulted the Chagos Islanders. But is this initiative a genuine and sincere attempt to secure resettlement, or is it just another way of distracting the Islanders from the long-term aims? The other big question which is now in the court of the exiled Chagossians: do they really want to go back home as they have claimed over the last 40 years?