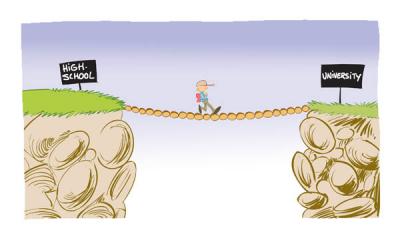 In the recent weeks, I was involved in a teaching project known as the 100 Up at the University of Cape Town (UCT), which could be an idea worth exploring in Mauritius.
The 100 Up project is part of the Schools Improvement Initiative (SII) started in May 2012 to establish a collaboration between under-resourced secondary schools in the township of Khayelitsha and UCT. The 100 Up falls under the SII’s fourth objective of ‘university recruitment’ ; the other objectives being ‘teacher professional and school organisational development’, the launch of ‘professional practice schools’, ‘staff engaged scholarship, students volunteerism and service learning’ and external engagement through ‘partnerships and collaborations’.
The SII is said to serve as a ‘vehicle for extending the university’s engagement in schooling in response to the education crisis in South Africa’. The crisis referred to here is largely a product of the unequal Bantu schooling system that was enforced during the Apartheid era, pre-1994. The school-university collaboration can thus be seen as a measure towards social redress and transformation, enabling students from township schools to be exposed to good teachers and learning resources, as well as a measure towards university preparedness.
The 100 Up project is a three-year support programme where top students from twenty secondary schools are offered weekly sessions on life skills and academic skills, including writing. I was involved this year in conceptualising and teaching on a short writing programme for the students’ three-day academic camp along with a team of four UCT Writing Centre consultants.
We ran two-hour sessions each with groups of Grade 11 and Grade 12 students (equivalent to our Lower VI and Upper VI), introducing critical reading skills, academic writing skills and argumentation. We were aware of time constraints and selected the same topic to inform the three segments of our session – a contentious issue that raised interest and provoked animated responses from students.
In the reading session, students read a passage about the issue and annotated it by summarising each paragraph in one sentence. At university level, this practice is particularly useful in condensing very long and terse texts and distilling the key points made by the author. It is often called ‘athletic reading’ and goes to show, as Roland Barthes would insist, that texts require work from the reader.
Their next task was to delineate the author’s views on the subject matter, other views and their own views. Again at university level, one is not merely expected to regurgitate other’s views, but to ‘appropriate’ knowledge, make it one’s own by stating one’s views alongside other scholars’ and engage with them.
The third task was to generate a debate on the topic. The board was divided into two and students came to the front and wrote down reasons for and against making the youth language a national language. Once the board was filled, students began to explain their reasoning and surprisingly the Grade 11 students came up with more creative examples than the Grade 12 students I taught two days later.
Finally, they were taught the key components of a paragraph and had to string their thoughts in logical prose by presenting their reasons, explaining them and offering evidence for them. This task was important because it introduced them to the academic writing genre, which is often not made explicit to university students in their respective disciplines.
Reflecting on the teaching process, one would hope that these sessions really made a difference in the lives of these secondary school students. The feedback we received was overwhelmingly positive. One student wrote, ‘What I found most interesting in this session was to hear other people’s views about the topic and how university students write essays differently from high school learners’. Another wrote, ‘We were able to view our different points without criticising each other but we communicated with respect’.
Our team offered some two hundred secondary school students a glimpse of the interesting if not complex world of academic texts, a glimpse of how the readers can find a voice in the labyrinth of other texts if only they dare try. Just a glimpse of what they would be confronted with at tertiary level.
Realistically speaking, one would need at least a month of bi-weekly sessions with the students to keep the dialogue open and guide them through the multi-layered academic writing process. ‘It is hoped that consideration could be given to such a programme in future ; either whilst still at school, or perhaps as part of a pre-university bridging programme, ‘ stated Dr Jonathan Clark, SII Director.
Also, one can have more impact and on many more students in future if one collaborates with others dedicated to the cause. At UCT, the SII works jointly with SHAWCO, a student-led organisation that runs a Saturday school programme with grade 12 learners, and Ubunye, that offers a weekly tutoring programme in one of the township schools.
As a coherent set of projects and interventions, the SII model appeals because it allows the university to be socially aware and responsive. It also appeals because of its tremendous potential in other African countries such as Mauritius where university interventions could help bridge the gap between university and school academic structures especially in under-privileged sectors, between those who have the expertise and those who need it the most, and finally, between knowledge itself and the desire to do good.