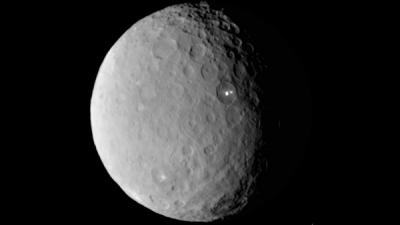 As natives of a small island state, Mauritians are socially and emotionally close to the sea and, inevitably, to one of its major chemical constituents, namely Sodium Chloride, a.k.a “Common Salt”. However, we should also apprehend that common salt is not an exclusive property of oceanic island nations and does, as a matter of fact, exist in some strange locations indeed. Not so far away, for instance, lays one of the largest salt pans in the world. The Magkadikadi salt flats are an impressive large expanse of salt that lies within the Kalahari basin in the Southern African region. These salt flats are the remnants of a defunct lake that once existed in this great topographic depression in what is now the landlocked country of Botswana.
But salt reserves may now not prove to be the leftovers of seas or lakes on earth alone. NASA’s Dawn spacecraft, which recently entered orbit around dwarf planet Ceres and started science in April 2015, is presently showing exciting pictures of that largest of objects in the asteroid belt between Mars and Jupiter, indicating that there may be salt (or salts) in some of its craters, seen as very bright patches of, so far, unexplained exact constitution.
Pluto is another dwarf planet where there may be lakes- albeit very cold ones – this time possibly of liquefied or frozen methane or other hydrocarbons. It is remarkable that, within a few weeks in 2015, the two major dwarf planets of the solar system, namely Ceres and Pluto, are being visited at close range by space probes, and we are now learning more about them than ever previously possible from earth-bound locations. The New Horizons spacecraft, launched in 2006, is presently approaching Pluto, and is to make its closest approach on 5th of July 2015. It is now starting to show us more details on that cold withdrawn world that once had a status of a planet.
These flybys of distant bodies of the solar system are an illustration that the target of sending men to other planets is simply still a wild dream under present human technology. We are getting science and knowledge from remote worlds in a more cost effective and efficient manner through sending such machines on mission than trying to engage into the risky and expensive way of sending people out in hostile emptiness. The time might come, in a distant future, where humanity will leave the solar system but, for the moment, let us be gratified by its space probes which are transmitting awesome images of distant and exotic bodies of rock, ice and salts, as further signs of our smallness in the universe, and of the strangeness and diversity of its composition.