Last week while walking in Port Louis I saw in a shop window one A-4 sized poster addressed to students of various universities in Mauritius having to write dissertations and assignments.  While it may appear quite innocuous, it set me thinking. I talked to some younger people around me and they all confirmed knowing people who paid to get their assignments and / or dissertations written for them. I am also aware that such services are also offered online.

This is not a recent phenomenon, I recall being the dissertation supervisor about 20 years ago of one very confused MBA student registered with a British University represented by a local organisation. I asked him a few questions to get him focussed on the topic he had chosen and gave him some articles to read for his literature review.  He showed up after a week with a literature review chapter which was very well written but which did not refer to even one of the articles I had given him to read even though they were all relevant. This aroused my suspicion. He then disappeared and I only saw him again at graduation time having submitted his dissertation without even showing me the draft.  This confirmed my suspicion.

I have also stumbled on a Daily Mail article published in 2006 about a UK government-backed report “recommending tougher measures such as finger print or retina scanning” to prevent impersonation during examinations, and pushing for the use of devices commonly used by detectives and surveillance firms to detect the use of mobile devices by students during examinations (https://www.dailymail.co.uk/news/article-420481/Students-face-pre-exam-security-tests-stamp-fraud.html).  There is no doubt that technology has resulted in a kind of cheating that is more difficult to detect. The above article also indicates that student malpractices are not restricted to Mauritius. Some Netflix subscribers would have also come across Mike Ross (in Suits) who took Bar exams for others against payment. While this is only a fictitious example, it does hint at certain practices.

The other kind of malpractice prevalent in Mauritius is the use of multiple fake medical certificates (a.k.a. MCs in student circles) to justify long and repeated absence from school and ensure that one is eligible for the payment of examinations fees by the state. This is often condoned by parents and school authorities alike.  Other ploys to falsify attendance records include getting others to sign attendance sheets on one’s behalf – often tacitly tolerated by the academic institution concerned. 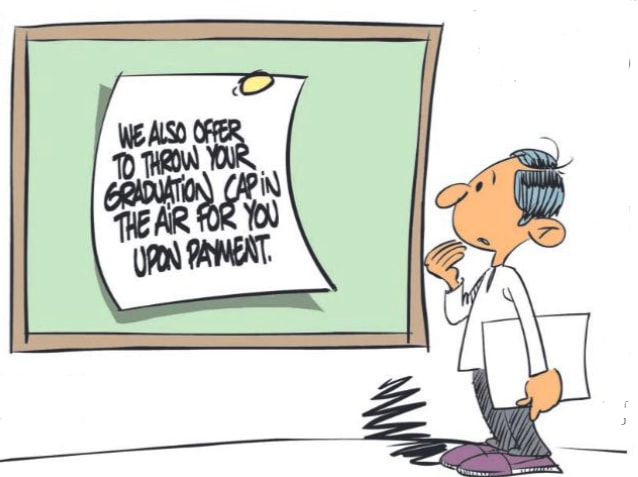 The malpractices relating to dissertations, assignments, coursework and examinations would result in an erosion of the credibility of academic certificates – if this is not already the case.  This is one of the reasons why I routinely administered job-related tests in order to screen applicants over the last two decades.

Academic institutions, on the other hand, should consider ways to review their assessment practices and replace those that are vulnerable to impersonation and use relevant technologies to detect malpractice and take action against those found guilty.  Academic institutions should ensure, for instance, that written submissions are supplemented by oral examinations.  While measures like this may prove to be time-consuming and expensive in an era of mass tertiary education, they would be inevitable if one is to ensure the credibility of academic certificates.

Academic institutions would be well advised to enlist student participation in the review of the assessment practices not only because the latter have a vested interest in the credibility of the academic certificates but more importantly because they are likely to contribute a valuable perspective in the analysis of the problem and ensure that the proposed preventive and corrective measures are effective.

While one may choose to discount the impact of student malpractices or find ways to limit its impact on job selection for instance, there is a deeper issue at stake. This concerns what we expect the future generations to be. When malpractices of the kind mentioned in this article are tacitly condoned by those who are primarily responsible to inculcate values (i.e., parents and academic institutions), this is very likely to result in future generations without a moral compass, for whom cheating is the norm. This would undermine our very social fabric and does not bode well for the future.