At the outset, let me point out that I am not an expert in the area but with this article I am aiming to trigger a debate within and outside the political circles on this issue.

Without a government, no people can exist as a nation or community. The way we choose and the way the government is chosen are fundamental. To a large extent, the quality of the national elections determines the fate of the government we elect. In a democracy, a national election represents a kind of filter whose use can cleanse the politics and governance of a country and that goes for Mauritius as well. If the filter is clogged, then we may end up with a different scenario. There is some clogging in the filter that needs cleaning. Actually, there is a lot debate/exchange of views on the electoral reforms, but I believe that we are missing a fundamental one – “The delimitations of constituencies”. The next report on this issue is bound to be released in 2019, following the 10 years trend. In the past the constitutional provisions under section 39 (2)- [The Electoral boundaries commission has the duty to review the boundaries of the constituencies and to present a report to the Legislative Assembly 10 years after their last report] have been flouted. The first report after Independence was released on 13th July 1976 and according to section 39(2) the next report expected in July 1986 was released. The next report expected in 1996 was never released on time but with 3 years delay it was released in 1999 flouting the constitutional provisions. I don’t recall any explanation given to justify this delay. Since 1999, a new 10-year pattern was established. So, after 2009, the next report is expected next year. If we are serious about responsible reform, then we should first and foremost be looking at the delimitations process deeper and ensure that the Electoral boundaries commission do come up with constituencies that are level-playing for voters.  A lot of people, especially the purist and those pretending to, will argue that this is an independent exercise. True and I agree. We have to uphold an impartial and independent process from the legislative and political concerns but also ensure the best approach to selecting or reforming a redistricting process. Ultimately, and analyzing deeply, election results and the partisan composition of the legislature are largely dependent and affected by the selection of constituencies boundaries. This is a fact that we cannot ignore. So, the 2019 exercise is crucial. Irrespective of any electoral reform our country wants to engage, the 2019 review process of the boundaries of the constituencies needs to be fair and provide for constituencies with equity of strength. The importance of the review process is seldom recognized and debated outside of political circles. After 50 years of Independence and in the light of strengthening the democratic set-up and to ensure that we have a process that moves away from colonization norms to modernity, the factors on which delimitation is carried out/based need to be scrutinized, re-defined and improved.

Moving from Electoral districts to constituencies

Already the creation of the 20 constituencies was done on a pairing exercise. Since then we have had 4 reviews so far – 1976, 1986, 1999 and 2009. The last report, which proposed some major changes, was rejected, so the 2010 and 2014 elections were conducted based on a review that took place in the last century. In a short form there has been no major changes since the pairing exercise took place. I am assuming here that even nowadays our MPs are being elected on a constituency system that has a lot to do with colonial legacy. In this sense, the next general election should be regarded more than just merely a democratic ritual that the country has to undergo but is equally an opportunity to pave the way for more equal voting strength, as election may coincide with the review process.

What can happen if a review  is not done in a fair manner?

The guiding factor should  be “Equality of Voting Strength”

Electoral boundaries should be drawn so that constituencies are relatively equal in voters/population. Equally populous districts allow voters to have an equally weighted vote in the election of representatives. If, for example, a representative is elected from a constituency that has twice as many voters as another district, voters in the larger district will have half the influence of voters in the smaller district. Electoral districts that vary greatly in population–a condition referred to as « mal-apportionment »–violate a central tenet of democracy, namely, that all voters should be able to cast a vote of equal weight. 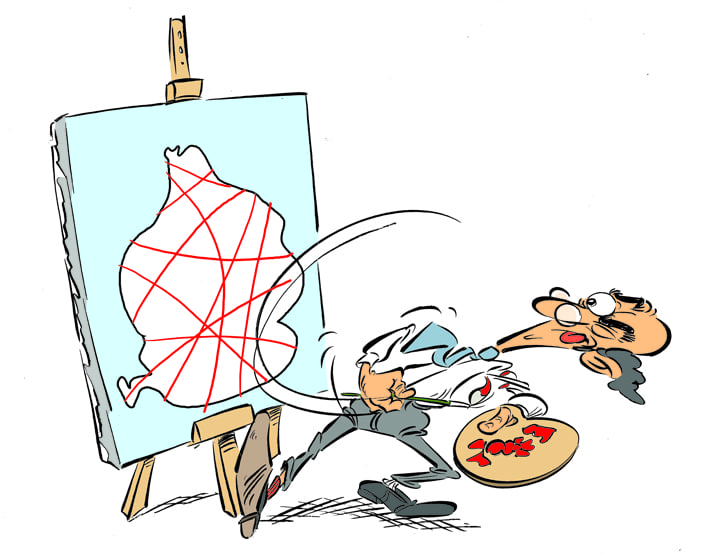 Where is the fairness? The equality of voting strength is eroded which means that the actual system is eroding a central tenet of Democracy. The dominant factor guiding all the review process since Independence is “population quota” (total number of inhabitants divided by 20 constituencies). If we go by the 2009 report the population quota was 57,167 and Article 6.3 of the same report states – quote “Each constituency is required to reflect as far as is reasonably practical this population quota”. Only 3 out of the 20 constituencies are around this figure, 17 constituencies divert. Is “population quota” still a valid dominant factor to delimit the constituencies? The other big question that requires some profound thinking and discussion is – Why use total number of inhabitants as the common numerator when voting at elections is strictly for voters? The co-relation between inhabitants and voters number can vary significantly from one constituency to the other adding more uncertainty. Whether introducing something like the “Voters quota” would be more appropriate to have balanced constituencies.

Article 21 (3) of the Universal Declaration of Human Rights

I Quote – “The Universal Declaration of Human Rights Article 21 (3) states:

The will of the people shall be on the basis of the authority of the government; this shall be expressed in periodic and genuine elections, which shall be by universal and equal suffrage and shall be held by secret vote or by equivalent

free voting procedures”.  The concept of “equal” suffrage applied to constituency delimitation means that all voters in Mauritius should be granted a vote of equal weight in the election for their representatives. This principle translates into a requirement of equal populations/or voters if the “voters quota” is accepted across constituencies. What should be also well defined is the permissible variation range from this quota. What population/ voters that need to be equalized should be clearly established prior to undertaking the delimitation process in 2019. This requires a new census.

Mal-apportioned constituencies – constituencies that vary greatly in population just like the ones we have presently –, not only violate the principle of equally weighted votes but convey the perception that intentional bias has been introduced into the delimitation process eroding the trust factor in the process [Allow me to illustrate what could be perceived as a bias. In 1986 the region of La Source was annexed in No 18 and Cité Kennedy is still in No 14]. This is because mal-apportionment can be used to ensure constituency boundaries that favour one group (such as the ruling party) over others.

Other factors considered by the EBC

The blanket provision of the process

“As far as is reasonably possible” is a blanket provision to be found in nearly all the reports. In a nutshell it conveys that “I am right even being wrong, I am right even choosing on a case to case basis which factor fits which constituency, I am right even the voters variation in constituencies are more than 300% and so on. This blanket provision covers all the huge inaccuracies in the process and needs to be removed to make place for scientific delimitation process. Today with technology, tools like sensing and many others, the delimitation process cannot be so inaccurate. It can be done and needs to be carried out on a more scientific way. We deserve better.