The International Indentured Labour Route Project (IILRP) has a story that is worth telling. It started, in my own work and praxis, in 1994, when the Slave Route was launched. At this momentous occasion, at the UNESCO headquarters in Paris, I met Dr Doudou Diène, the conceptor of the Slave Route (SR) and Federico Mayor, the Director-General of UNESCO. I proposed the idea of a Coolie Route. That was well before the Aapravasi Ghat and Le Morne were listed by UNESCO as World Heritage Sites, in 2006 and 2008, respectively. Here are the main landmarks leading to the inscription of the IILRP in 2016, as sometimes, most of us ignore what it entails to inscribe a route on UNESCO’s agenda.

In 2011, Raju Mohit, the officer-in-charge of the Ghat agreed to make a proposal regarding the Coolie or Indentured Route to UNESCO. I met him and Mahen Utchanah at the AG. All went fast. The management of the Aapravasi Ghat officially mandated me to begin the inscription of this International Indentured Labour Route on the UNESCO agenda. Without losing time, I contacted Dr Doudou Diène, conceptor and former director of the Slave Route in this regard.

Continuity in our actions had spanned twenty years and founded a common view regarding our dialogic approach of servitude. Therefore, there was no question of laying the foundations of this indentured route with the same roadmap as that of the SR. Indeed, the context of the emergence of these two routes is important, to situate the challenge and complexity of the task.

Behind a route inscription

A route is inscribed by experts of UNESCO after very close scrutiny of its value and impact on the host country/countries as it often initiates cultural, socioeconomic, regional, transregional dynamic, and sometimes, controversy. UNESCO is very careful regarding its content and how this relates to a particular historic and social context.

I recall that in 1994, the SR became a reality after many struggles and debates. It was not an easy task. Its preambles quoted Elie Wiesel: « The executioner always kills twice, the second time by silence ». 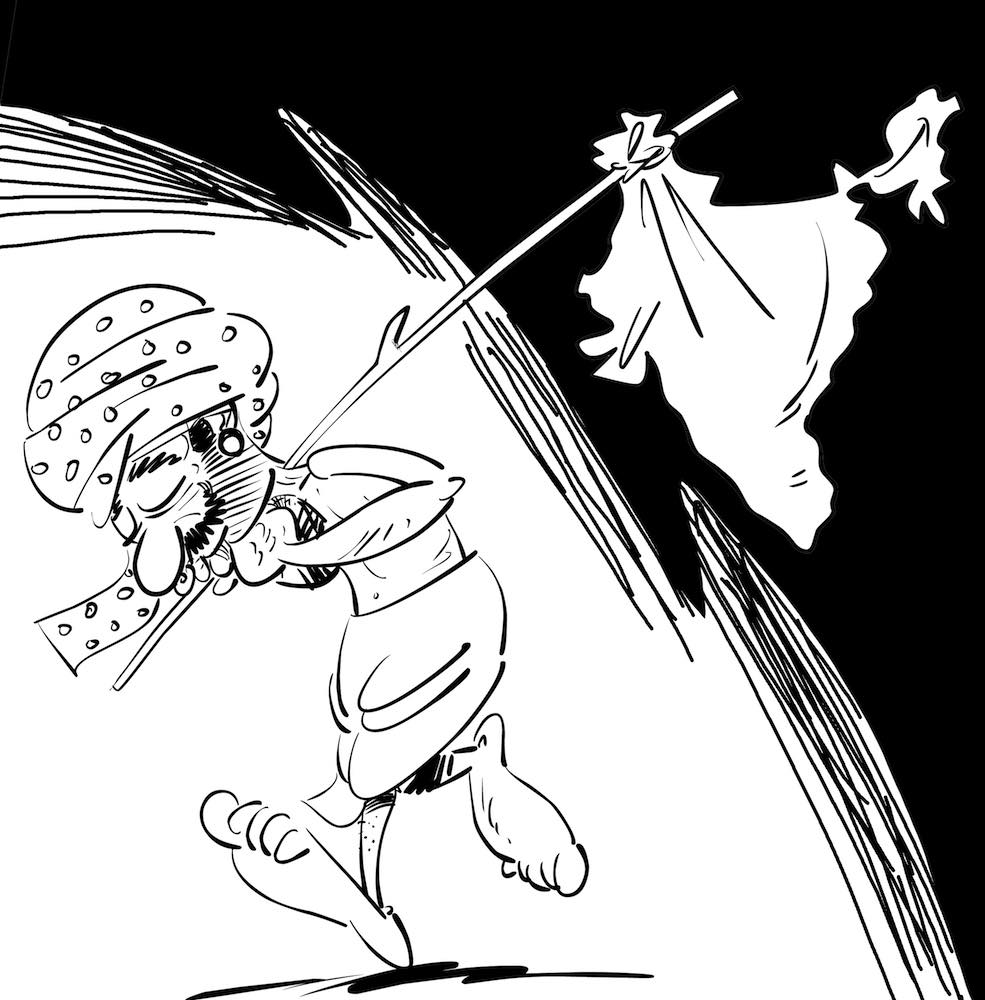 For more than a century and a half, slavery was brushed under the carpet in mainstream milieu. It was therefore an act of courage to challenge this form of oblivion and censorship and bring to the world’s attention practices which have affected tens of millions of enslaved human beings.

At that time, the DG of UNESCO, Federico Mayor, did not deviate from the objectives linked with the « duty to remember » and work for a better understanding between peoples. This spirit grounded the SR project. The vision and pugnacity of Dr Diène were decisive in its creation. He declared: “We wanted to retrace contacts between all peoples. The objective was to come back to a history that we felt had been hidden and to review it as a global history, a first form of globalization that took place in all continents, it belongs to each country. UNESCO supervised the work as an international institution (…) At the same time, Afro-descendants from all countries of the Western Hemisphere, the Americas and the West Indies recognized themselves in their identity erased by slavery racism. A process has been launched, strongly supported by The Slave Route…” (1).

Slave Route and the IILRP

The history of the SR is of high significance.

In 1994, when I proposed the creation of the Indentured Route during its launch ceremonies of the Slave Route at UNESCO’s Paris Headquarters, Diène told me: “Please wait. The voice of slavery has just become audible. There is still work to be done for it to pass into national and individual consciousness. Resistance to the facts is still stubborn. Putting a Coolie Route right in the wake of our route would open another front and it would require other energies, other means….”

Patience is an ingredient of a praxis, as are visions articulated in a philosophy aimed at fostering understanding between peoples.

Diène is a person with a vision of a “longer History”. He is now Special rapporteur of the UNO for racism and discrimination. He knows the realities of Mauritius and we often shared on the complexity of site policies here.

He understood my methodology and its awareness that indenture was not to be essentialized but historicized. We know that many societies have been shaped by violence, racialism, domination, dislocations of cultures and memories, trauma of displacement of population, marginalization… And now, that we are at a stage of mutations, globally, we had to address these issues, namely in the philosophy of UNESCO’s routes, with an inclusive methodology.

I waited for two decades for the IILRP to mature…

To let me know that my request was not forgotten, UNESCO invited me to Paris to talk about coolitude, as a representative concept in the Indian Ocean region, in 2010, for UNO’s International Year for the Rapprochement of Cultures. I reiterated the need for dialogue between indenture and slavery on the same panel as Doudou Diène. We evoked the Indentured Route again. We still had to wait, Dr Ali Iyé, the new director of the Slave Route, told me again… But I knew we had moved a long way.

I believe that as a logical extension of the methodology developed over the last twenty years, a fact has to be established.

Unlike the fundamental spirit of the Slave Route, which aimed to bring out a muffled page of History of pain, almost to the exclusion of indenture, the Route of Indenture, to exist, had to develop its genesis in a dialogical relation with the Route of Slavery. A Route cannot compete with another Route, just as a UNESCO site cannot compete, for bad reasons, with another site. It is a matter of global coherence for the sites it classifies as global vectors of peace and understanding.

This delineated the philosophical premises of my approach.

I clearly indicated that to the governing body of the Ghat, as we had been moving in an inclusive dynamic together for years. We had to remove our closures and a victimary approach and engage with a dialogic one, keeping in view that the globalized societies of the Information Age, while being multicultural, were also traversed by regressive, essentialized, racialized definitions of History and identities.

In the process of starting the Indentured Route with an inclusive philosophy, the Ghat team, led by Mahen Utchanah, Raju Mohit, officer-in-charge, supported by the Minister of Culture Mr. Mookhesswur Choonee, and at a later stage, Armoogum Parsuramen, ex-Minister of Education and ex-Secretary of the Board of UNESCO, gave me carte blanche and an official authorization to set the ball rolling.

In the first documents sent to Doudou Diène, I put in the forefront the necessary articulation of the two routes of servitude and the concern for intercultural dynamic to be promoted in a broader sense. In this dialogical perspective, it was obvious to me that the IIRLP had to voice this complex declaration of faith to obtain its birth certificate.
This fact is not to be missed in the rather unknown history of the IILRP.

The IILRP was inscribed on the UNESCO agenda in October 2014. After the AG site, Mauritius had been able to move to a broader materialization of indenture, this time, of greater international visibility and significance.

It is worthwhile to remember that our prerequisite is contained in the UNESCO’s preambles of the IIRLP, even if the word coolitude is not explicitly mentioned. Its methodology articulating indenture and slavery, indeed, is no secret to those who have been mobilized on this Route, namely Mookhesswur Choonee, Minister of Culture, Mahen Utchanah, chairman of the Ghat, Raju Mohit, Officer-in-charge and Satyendra Peerthum, historian.

UNESCO’s official document states: “The International Indentured Labour Route Project will complement (my emphasis) the Slave Route Project since both relate to the movement of a mass of people across continents. These movements based on intercultural exchanges (my emphasis) have been instrumental in forging most of the modern societies of today (…). This project will inter alia:

• contribute to a better understanding of the dynamics of the movement of millions of people and cultures in that age;

• highlight the global transformations and culture interactions that have resulted from this history; and

• contribute to a culture of peace by promoting reflection on culture pluralism, intercultural dialogue, sustainable development and peace ” (2).

I couldn’t be more precise regarding the epistemological imprint of our work in this more than explicit document.

We still need to develop a strong methodological approach to implement the inclusive vision of the IILRP and foster synergies between the Slave and Indentured Routes. I hope all those engaged in this mission will foster an inclusive philosophy in the times to come. Voicelessness of humanities remains an issue…