I met Enayat Hossen Edun in July this year during my short visit to Mauritius. An intellectual ‘giant’ in the Urdu language in his own right and who is in a class of his own; who strikes one with his great humility and modesty and which are also the most striking features of his pleasant personality. There is no doubt that his modesty springs from his rural roots. In fact, he was born in the village of Triolet, in the north of Mauritius, where he grew up and has lived his whole life and where he also did his early schooling and later brilliantly pursued his higher education at the prestigious Aligarh Muslim University, in India, from where he graduated in the Urdu language – earning a Master’s degree in the field.

It is little wonder then that, on his return to Mauritius in 1970, it did not take him long to become a major player among the proponents of Urdu in Mauritius which, due to some unfortunate historical misconception, has generally been somehow ‘associated’ with the Muslims from India.

In fact, the Muslims of Mauritius are one group who actually study the language although it is an Indian language at par with other Indian ethnic languages, namely: Tamil, Telegu, Marathi, Gujerati etc. But then, this is Mauritius – a model of a ‘democratic’ society with a multi-cultural population and where the rights and cultures of each and every segment of its multi-cultural and multi-ethnic population are respected and promoted – a remarkable feature which distinguishes the island state from many other nations.

Indeed, in Mauritius, the people live with their differences; they know each other and they respect each other. They know they need each other and that every member, every group, every community in the land needs each other; they work together and respect each other’s differences and they have always got along well with one another at the personal level. Mauritius is their homeland and they are all Mauritians. Is it a wonder then that Mauritius has always been peaceful and generally free from inter-racial strife and has been a good country to live – a fact that is quite in keeping with the diverse multicultural heritage of the Indian sub-continent, where linguistic diversity is an integral part of the fabric of society and for which, in Mauritius, the migrant Indian workers found a natural abode befitting their temperament and over all culture. Indeed, multiculturalism is a natural feature of Mauritius society.

That the Urdu language became associated with the Muslims in India is not surprising. In fact, Urdu, as a language, came about in the military camps of Mughal India, where the language of the Court was farsi (Persian). Urdu was coined by the Mughal soldiers in the army barracks. It came about as a patois (dialect) with a blend of Arabic, Farsi and Hindi words and was used by the soldiers, many of whom were of Turkic origin and spoke either Turkic or farsi (Persian). The soldiers used the new language to communicate among themselves just like the patois–créole evolved in Mauritius from French, the language of the French-colons, and which facilitated their interactions with the African slaves. Later, that Indian camp-developed-dialect would morphed into the sweet, smooth and beautifully lyrical language of rhyme and rhythm we all know and love and known to-day as Urdu and which would eventually grow as the language of the Muslim elite in Mughal India.

The Muslims of India generally used Urdu, amongst others, to expound their religion Islam, and Islamic culture and, in the process, came to adopt the language as their own although it was not and NEVER meant to be so. However, in India, it is a fact that there has always been many non-Muslims, notably Hindus, who speak and write Urdu. In fact, I am told that some of the best known writers in the Urdu language in the Indo-Pakistan sub-continent are non-Muslims – meaning Hindus.

Urdu, as a language, arrived in Mauritius with the Indian (Gujerati) traders and the migrant (indentured) workers. The Indian traders in Mauritius came into the colony around 1835 — that is, at about the same as the migrant labourers. Those traders were mostly Muslim by faith and spoke Urdu beside their own Gujerati language. Locally, they were identified as Surtees and Meimans, coming as they did from Surat and Kathiawar, in Western India.

However, Urdu struggled to survive among the indentured workers, among whom there were very few Muslims, who were literate. But with the Muslim traders, it was a different story. The traders were literate in their own Gujerati language as well in Urdu. Besides, they knew their religion and culture and felt for them. Thus they would go on to build schools, found madrassas and mosques in the island, among others, to teach Muslim boys and girls about their religion Islam and Islamic culture as well as the Urdu language. Thus, in their own modest way, the small group of Gujerati traders strove to keep their language and culture alive and the small community of Muslim field workers saw to it that their children did acquire some knowledge — although rudimentary — of their religion and culture through the madrassas.

In the 1950’s, the Urdu language in Mauritius would get a boost from the Government when it decided to implement the teaching of ‘heritage languages’ in the government primary schools – notably: Hindi, Urdu, Telegu, Tamil, Marathi etc. From then on, the learning and study of the ‘heritage languages’ in Mauritius, would change. The Hindu students learned Hindi, the Muslim children Urdu, the Tamil boys and girls learned Tamil and the Telegu children studied the Telegu language. On top of that, the Mauritian boys and girls continued to learn English and French, which were an integral part of the general school curriculum. So much so, one can safely say that Mauritian boys and girls are polyglot students par excellence.

Enayat Hossen Edun, a fourth generation Indo-Mauritian and descendant of the indentured workers brought to colonial Mauritius, is a glowing example of the long, long way the progeny of those workers have come and how the study and learning of the Urdu language – and, for that matter, of the other Indian ‘heritage languages’ – have progressed in Mauritius.

Enayat Edun’s name figures eminently among those who have contributed significantly to boost the propagation of Urdu teaching in Mauritius, and which, today, is studied not only at the elementary and secondary levels but at post-secondary level as well. And Enayat Edun shares a good chunk of the credit with the pioneer-promoters of the Urdu language in Mauritius, notably: Maulana Abdullah Rashid Nawab, Sir Abdul Razack Mohamed, Abdulla Currimjee, A.Wahab Foondun, Gul Hamid Beegun among others.

Enayat H. Edun’s role in the expansion of the teaching of Urdu in Mauritius has ever been significant and he remains an iconic figure in the history of Urdu in Mauritius.  Sure, he was well-cut for that role by virtue of his impeccable academic and professional credentials both as an Educator and also as one of its enthusiastic promoters. In fact, Enayat H. Edun would spend his entire career, first as an Education Officer and, later, as Head of the Urdu Department at the Mahatma Gandhi Institute. Indeed, it is an undeniable fact that he has played and continue to play a leading role in the promotion and expansion of Urdu in Mauritius.

Also, in the ensuing years, Enayat Edun would join other enthusiasts of Urdu in the country to found the Mauritius National Urdu Institute (MNUI) of which, as General Secretary, he would be the cheville ouvrière for over thirty years. As such, he would play a front-rank role in the promotion of the Urdu language in Mauritius not just as a vehicle for learning and teaching of Islamic culture but also as a subject for higher studies in Islamic arts and literature.  If Urdu is now studied, as a regular subject at both secondary and university levels in Mauritius, the credit goes in no less measure to Enayat H. Edun and his colleagues and collaborators at the Mauritius National Urdu Institute. The Institute helped form numerous teachers in the language, who would go on to take the teaching of Urdu to new heights in the schools and colleges of Mauritius. 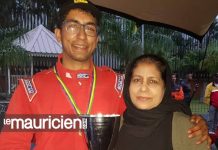