Simple. They had gone through plenty but survived. There’s a word for this and it is resilience. Granted it’s a term that has been abused in Mauritius over the past decade. But it’s easy to show what it really means. As RAFAL wrote about the resilience of trees recently I will focus on our savings culture.

The first thing to note about our savings (see 1) is that over the past 58 years they were quite volatile until 1981 essentially because of cyclones and our monocrop status. They were quite high and stable between 1985 and 2004. Mind you the average for the whole period covered in chart 1 is a little less than 20%, although a decent number was lower than the 24.8% of that stable 20-year span. What’s particularly interesting is what happened to this fundamental determinant of long-term economic growth when we were hit by three intense cyclones. 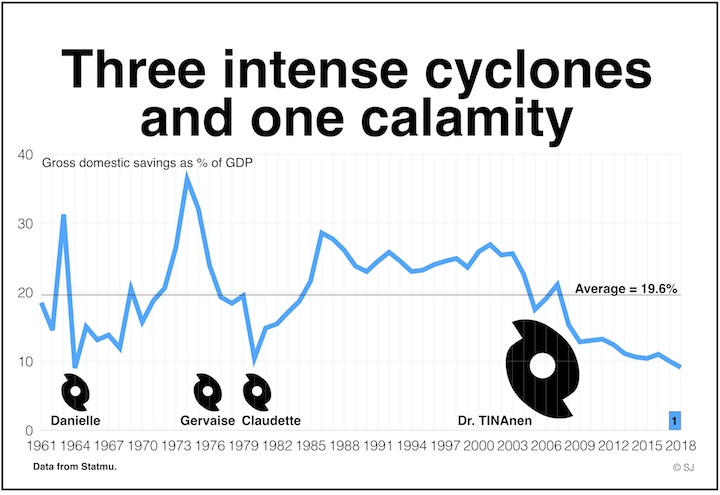 Although in 1964 Danielle drove savings to an absolute low of 9% after GDP fell by 17.6% – in contrast, according to Wikipedia, it took three years for world GDP to reach its maximum contraction of 15% in the Great Depression – savings jumped back to 15% the following year and was already 20% in 1969. So, we were devastated – it probably felt like the end of the world – and then we used our savings to get back on our feet which in turn boosted savings. This is a textbook example of resilience.

And Her Two Sisters

The second big dip in savings occurred in 1980 after another cutie visited us at the end of 1979. Indeed Claudette plunged the economy into a recession and savings collapsed by 47% but we recouped almost half of that drop the following year. Gervaise, a terrifying cyclone in 1975, did not affect savings for that year that much although it checked us out in February. That’s probably because it visited us after three consecutive years of double-digit growth – clipped under a system of progressive taxation – that had allowed us to significantly improve our resilience. GDP growth for that year was flat.

Something A Lot Worse Than An Intense Cyclone

The recent collapse in savings is different. It was caused by the completely dumb decision of one toxic bean-counter in 2006 to tax bank interest and compromise financial plans of literally a whole nation by wiping out the battery of exemptions that they had used to build up their resilience over many years of sacrifice. This was done to partly finance the flattening of tax rates to 15% to build a facade of low-tax jurisdiction and to get average growth rates of 8%. Which technically should have made our public sector debt-free by now but as expected it never did. Even the Pope knows trickle-down economics is snake oil. 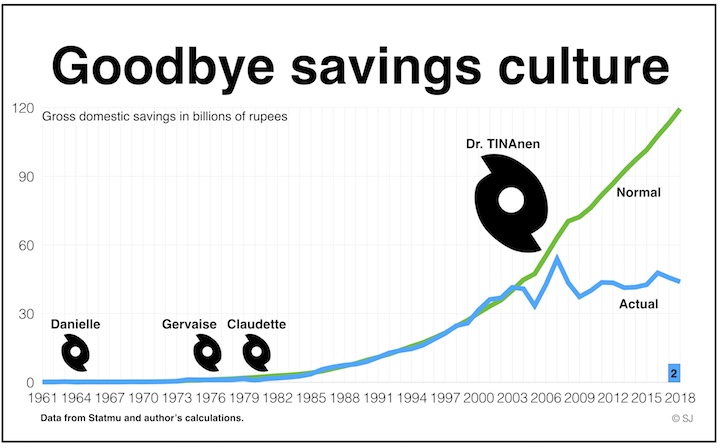 Savings Were Bouncing Back

As shown in chart 1 savings were in the process of bouncing back after the big consolidation in the textile industry when Sithanen implemented that string of regressive measures – in the name of TINA (There Is No Alternative) – which caused savings to go south. He’s going to say that his reforms worked because we got record amounts of FDI and these have made up for the savings shortfall. Is that so? Let’s find out

We can estimate how much savings is missing by picking a rate we would consider as normal for the period since the worship of an idolatrous economy began in 2006. We do not want to take the average for the whole 58 years as our economy was a lot more volatile in the 60s and 70s. A much better estimate is 24.8% which is the average between 1985 and 2004. We then compute a normal level of savings by multiplying actual GDP by this estimate.

Chart 2 confirms that 24.8% appears reasonable. Clearly the Sithanen flat tax, his other massive blunders and the maintaining of these toxic policies till now have caused a huge disconnect – there has also been one between international oil prices and what we pay at the local plumps – the like of which we’ve never seen before. Again, those in favour of the unsustainable tax structure will say that we’ve received a lot of FDI so trickle-down does work. And it’s all good. While we did receive plenty of FDI we know we didn’t get enough of the proper variety as otherwise it would have moved the growth clock in a more decent manner – 2019 will be the ninth consecutive year that growth will be under 4% or half the 8% needed. We also know that the poor growth didn’t trickle down. We just have to look at better measures of inequality – the Gini coefficient is not one of them. Or hear accounts of visits to public hospitals. 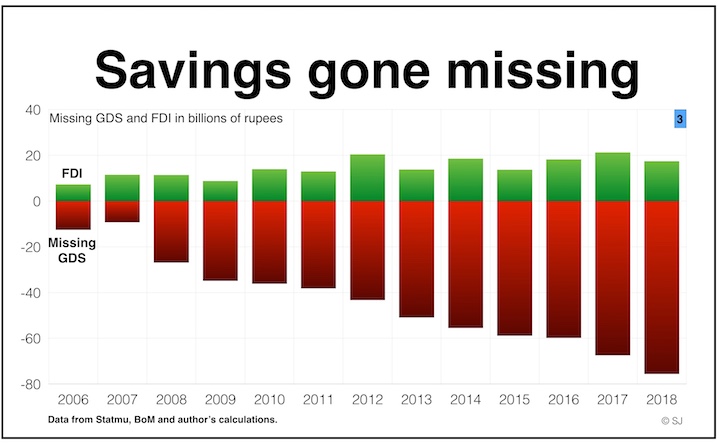 If we add the missing savings from 2006 to 2018 we get Rs569.7bn whereas the total FDI for the same period is Rs188.9bn. That’s Rs381bn of net savings missing which could have been used to put Mauritius on higher levels of development by building new fields of activities that are more respectful of the environment and our national heritage. Which is essentially what we did till 2006. 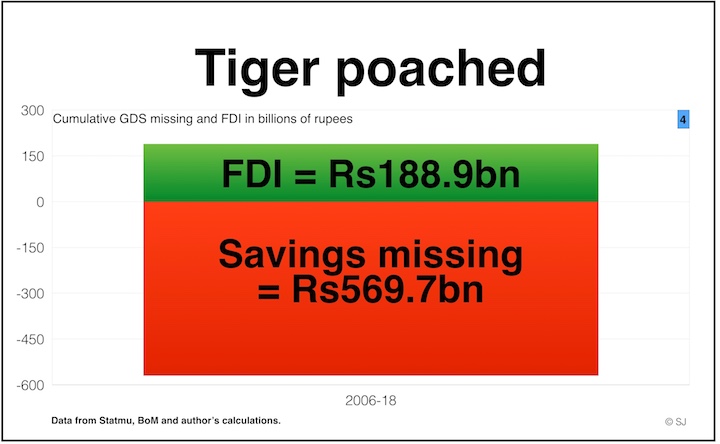 The Mess is Actually Bigger

The shortfall is larger because we used actual GDP growth and not the 8% growth target. But that’s easy to adjust. We just need to add 24.8% of the GDP shortfall – the infamous Sithanen toohrooh – at the end of 2018 (Rs1,500bn) which brings the net shortfall in savings to a whopping Rs753bn. It’s important to note that this mess happened in global economic conditions that were relatively mundane. Things will get worse even if the world economy doesn’t hit a rough patch. Unless we wisen up fast and bring exemptions back.