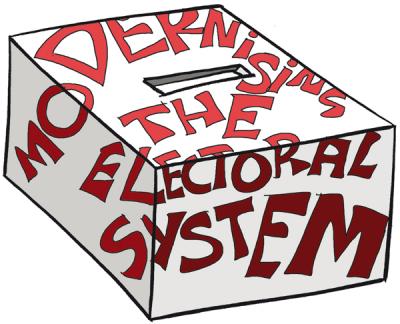 Like any Mauritian citizen with an interest, I sat down to watch my dear PM talk about the ‘Electoral Reform Consultation Paper’ or ‘White Paper’ as dubbed by media. Obama-style lectern, (I almost expected to see ‘Change’ written in bold on the front), neat shirt and tie, the Lion was out and ready to pounce… or so I thought.
The title of the press conference, broadcast live on probably half a dozen channels, was entitled ‘Renewing Democracy / Electoral Reform’. That remained on the lectern in front of the viewer for a little over an hour as the PM spoke on. We all know his ways in and around issues… and he led into the topic of the day with a plethora of politico-philosophical palaver, from the historical references to electoral reform to the complexity of coming up with a system that would be acceptable to everyone. If he should have moved rather quickly to the actual proposals for consultations, he long-windedly described its four cornerstones : stability, diversity, proportion and female representation. Through flashbacks and farandole, the PM waxed lyrical and waned my attention… but failed to convince me that his ‘White Paper’ had not jammed somewhere in the process…
The Head of Government looked the part, but did not play the part. His manner was unassertive, his method was bland. In a nondescript style, he pored and paused throughout the press conference, as he slowly revealed that, what probably many had expected, would not occur. For instance, the First Past the Post System will not be done away with, for a new breath to the republic and giving more executive powers to the president – as some may have wanted, or feared. The Best Loser System – the infamous relic whose incompatibility with the current demographics of the island was repeatedly underlined – would not be replaced, but ‘integrated’. This integration, I was to understand, would be within a list of a suggested 16 MPs to be elected through Proportional Representation, which has been high on the agenda of the Lion’s opponents for as far as I can remember. Incidentally, the press conference looked to me like a seduction spell… one that was reminding the opponents on “how much we agree on” … and how much they disagreed with their ex-former-now-current-remake partner, with whom they were unable to complete the reform when they had a _ majority to do so.
Therefore, although the PM’s apparent intent was to circulate electoral reform proposals, was the true motivation totally apolitical ? Was there no subliminal coaxing, endearment and flirting with the adversary ? In the absence of any groundbreaking, flabbergasting, mouth-opening proposition to amend the island’s electoral system, one can only be left with the impression that all this has been about attaining consensus. It looks perhaps like one of the pre-conditions needed to be fulfilled to make progress towards a new bond… a new ‘remake’. But perhaps I am going too far. Perhaps it’s my own brain that jammed. After all, hearing the Lion churn out useless details for an extended period has dimmed my wits. I am tired of trying to decode and make sense of his calculated conundrums. I shall wait for when I actually get my hands on this desired document !