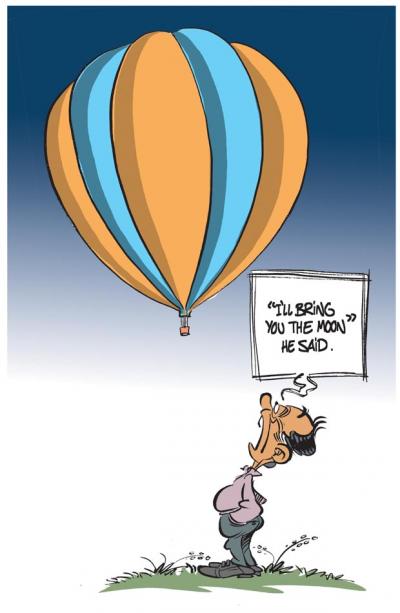 A lot of hot air makes travelling on my broom a lot faster. One of my daughters tells me this story about earthly school politics. Yes, over the millennia, I have given birth to a fair few daughters and sons. Even if I evolve in the realm where nothing is impossible, I would never be so ridiculous as to claim and proclaim status of Mother of the Nation. I leave such empty slogans to the truly desperate.
One of my school-attending daughters tells how the class captain was elected on the basis of a promise to lobby for an elevator (it might as well have taken them to the moon). Other than this promise there wasn’t much else to the person elected. A few days later, most students understood, regretfully, that they had voted into power someone on the basis of a populist idea built on hot air. It strikes me that much of your population does not evolve in its thinking, or rather thoughtless reflexes, past Form 1. The disadvantage of human size noses is that when you cannot see past it, you see very little indeed.
Take just two of your ministers, very present in the press this past two weeks, both full of sound and fury. The sound and fury of the one who flies around the island in a hot air balloon will come to signify little in the end. Since even when he has the privilege of a bird’s eye view of the island, he is unable to see his own reflection in the troubled waters of his own consciousness. The sound and fury of the fist-banging, jet-setting Minister of all Affairs (including Islamic Affairs) with short-term memory might, bien au contraire, come to mean something in the end. We await with baited breath to see if he will withdraw his complaint…
I have a natural abhorrence for weak men who hide their vacuousness under a lot of unnecessary noise. You seem to nurture them and elevate them to the status of gods.
Something in the hot air is making Rakesh G. smart though. He who should have been the villain of the last plot under the perpetual logic of bringing down the old boys. But here is an animal that is more equal than others. As Orwell might have said.
Having said that, I salute those of you grounded in their truths. The victory of Neerbun ushers in new hope. As does your own Action Man, in the name of Tuyau, one with a very special nose for unearthing uncomfortable truths.  A man of too much action, in fact, you have cut him down to size. Here are men who hold real power, daring to stand by truths and freedoms, answering only to their professional conscience, a commodity rare in the political crass. I am spotting a few good men, who are not for sale, create a new template.