of the dumb reports that the World Bank (WB) dishes out non-stop. Skimming through it immediately brings back to mind Lee Kuan Yew’s famous observation:

“The World Bank report’s conclusion are part of the culture of America and, by extension, of international institutions. It had to present its findings in a bland and universalizable way, which I find unsatisfying because it doesn’t grapple with the real problems. It makes the hopeful assumption that all men are equal, that people all over the world are the same. They are not.”

The WB is a controversial institution that should be closed for the good of humanity as it has messed up several countries. Or at least converted into a food court where falafel can become a reality with a good enough circular migration programme. Take Indonesia for instance. Sebastian Mallaby reports on page 190 of his excellent The World’s Banker – trade unionists and other progressive voices in Mauritius should definitely grab a copy – that the first thing that James Wolfensohn, the WB President at the time of a 1998 trip to Indonesia, told Dennis de Tray, its country director, was “You’ve really [expletive deleted] this country up”.

What the World Bank

is Particularly Good At

Definitely creating famine. Like in Malawi. Google up one 2007 New York Times article (Ending Famine, Simply by Ignoring the Experts) and you’ll find out about another big poop nicely summed up by Jeffrey Sachs as “the donors took away the role of government and the disasters mounted”. The CEM wants to do that too. It has “priority actions that could be launched immediately under the FY21/22 budget to kickstart the process”. That’s interfering with our sovereignty if you ask me and it’s serious enough to get the local WB office closed down. It’s a lot worse than the episode with the WHO representative at the beginning of the year. The other thing is that we’ve been told that the CEM has been crafted by 20 experts. Experts in what? Massive Economic Poop? Thanks, but no thanks. Been there, done that with Bretton-Woods Ali (Mansoor) who told Mauritius back in 2006 after getting the job of Financial Secretary from his university buddy and bean-counter that he would be adapting the practices of the WB that have worked elsewhere to our country.

Over a Cliff is Another Core WB Skill

This essentially took the form of an extreme version of trickle-down economics that was supposed to generate GDP growth rates that would oscillate around 8% by slashing already-low corporate and top income tax rates to 15% flat. As expected we never got 8% growth in any of the last 14 years ending in 2019 which is before COVID-19 started creating trouble. In fact and as the chart shows we didn’t even get 7% or 6% in that period (the average being barely above 4%). No wonder then that 67-year-old Sithanen has been out of parliament for 11 of these 14 years (79%) and that too because we didn’t have recall elections back in 2006 (we unfortunately still don’t and PJ would make his first serious bit of history by adding them to our constitution). 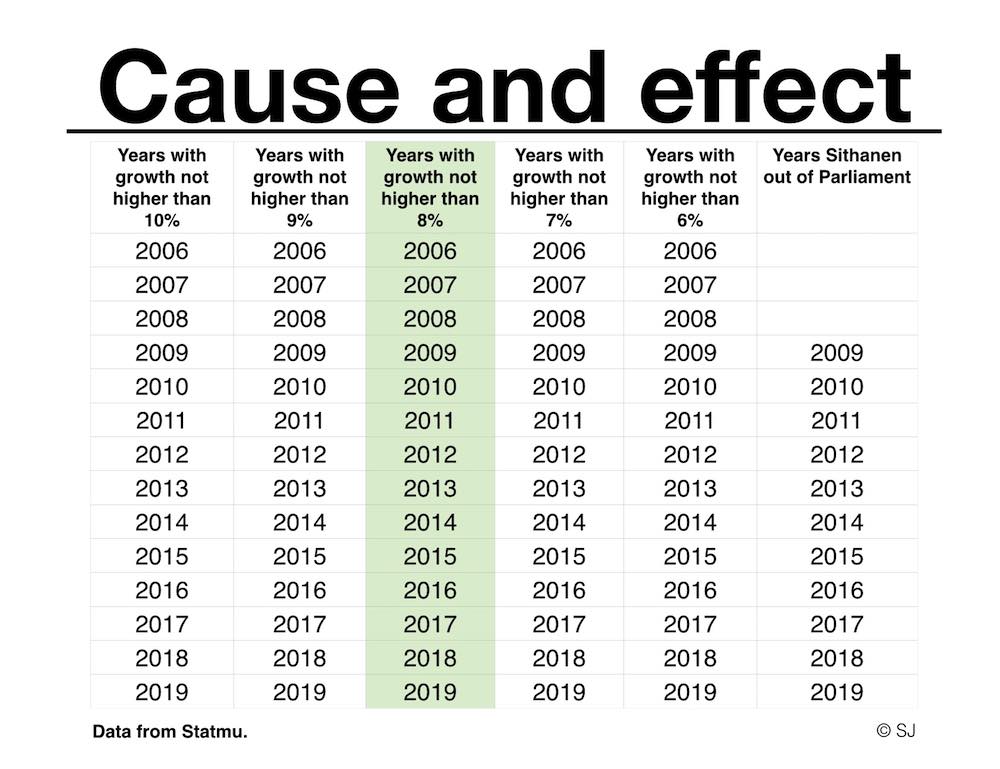 Good At Killing Savings Too

We know what happened to our savings after bank interest was taxed, double-digit inflation was created and our rupee was rapidly depreciated in the first few years of Paglanomics. According to recent and conservative calculations the savings missing between 2006 and 2019 exceed 1 trillion rupees.* That’s a million million rupees. Speaking about a trillion rupees did you know that according to Sithanen/Mansoor trickle-down policy our GDP was supposed to cross that threshold by the end of this year? Without COVID-19 national output would have been around Rs557 billion. In other words there would have been a GDP shortfall of nearly half-a-trillion rupees for one year. And it would have got worse every year as long as we stood on the wrong side of compounding. All of this obviously makes the job of our Finance Minister really simple.

Bring back corporate taxes to at least 30% which is roughly where they were before bean-counters started messing up Mauritius really badly with their economic snake-oil (aka WB best practices). So that we defuse the debt bomb and government doesn’t sit on its hands (while keeping busy with unnecessary distractions like the annoyance law and the ICTA proposal) and ruin the country along with its world-famous environment. Introduce a wealth tax. Very large dividends of several hundreds of millions of rupees should be taxed at 95%. End the wealth-destroying depreciation of our national currency and the corresponding bean-counting with the SRF. Solve real problems. There are quite a few of them. Don’t confuse wastage with GDP/revenue shortfall. By the way, there’s wastage in the private sector too. Or screw-ups with reforms. And…

When tax rates were 70% public finances were sustainable and we built a decent welfare state. Still there was plenty of social work that was going on because we were a left-for-dead country and the economic seas of the 1970s were quite choppy. These were done in an era with no social media. Plenty is still being done away from spotlights. But the current tax structure is simply not sustainable. No amount of solidarity can make up for that. Unless an expensive villa, a bundle of hard currencies, an optional dialysis machine, cleaner air, upward social mobility, a respect for nature plus a million of other things are delivered along with each food pack. There was already Rs1.8 trillion of GDP missing between 2006 and 2019. It’s way better for the 10% richest households (and for everybody else) to get 27.8% of a larger cake like in 1991/2 than 31.2% of the smallest of cakes that’s incompatible with nature like in 2012. Which is why in 2011 wealthy French saw their dreams come true: pay more taxes. Wealthy Germans had asked for the same thing two years earlier.