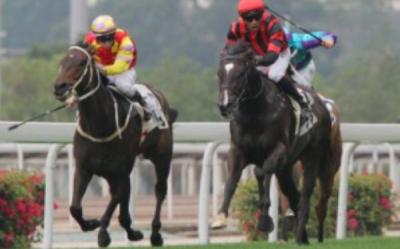 Karis Teetan’s mid-season resurgence continued with his second three-timer in as many meetings, including victory in the Group Three feature race as the lightweight jockey again earned rave reviews from trainers at Sha Tin last Sunday.
The 23-year-old started his first season in Hong Kong with a bang before suspensions and the arrival of fellow lightweight Joao Moreira ate into his opportunities and halted his momentum. But 13 wins for the month of March has ensured Teetan is now firmly entrenched in the top five in the Jockeys’ Championship with 37 winners and looking forward to the final third of the term.
“At the moment, my confidence is up and the trainers are trusting me – and I’m producing the winners,” Teetan said after wins on David Hall-trained Bubble Chic in the Group Three Premier Plate (1,800m), before scoring on Tony Millard’s Penny Lane and Tour De Force for John Size.
Teetan was again pointing to Moreira’s absence due to suspension as key to his big day – but listening to the trainers who use him most, it is clear the Mauritian is seen as more than just a stopgap measure.
“Karis is not getting the accolades he should be,” Millard said after Teetan gave Penny Lane a box seat run from gate 11, and delivered the four-year-old a third win in a row. “He has done a great job this season. He is a hard worker and he is strong in a finish, as we saw there.”
“I would back him in a finish over some of the more high-profile riders,” added Millard, who has now combined with Teetan for 11 wins this term.
Teetan is a product of the famed South African apprentice school, and Size believes it shines through.
“When he came here he brought with him a good work ethic – and that’s typical of South African jockeys, they just want to get on with it,” Size said. “Being light is a big advantage of course, but he is very determined and he shows plenty of energy in a race.”
Teetan produced a tidy effort in the Premier Plate – Hall had given him the option of leading on Bubble Chic, but found himself box-seating behind leader Same World. He peeled off at just the right time to safely hold another lightweight, Mr Gnocchi (Keith Yeung Ming-lun).
“When Same World went to the front I was happy, but I knew with my horse from when I won on him before that I needed to get going at just the right time and it worked out perfectly,” Teetan said.
Hall added: “It was always going to be a tactical race and the way it was run, it ended up playing into our hands. I was happy he didn’t get locked in behind the leader. It was pretty straightforward, but Karis is riding really well and is in great form.”