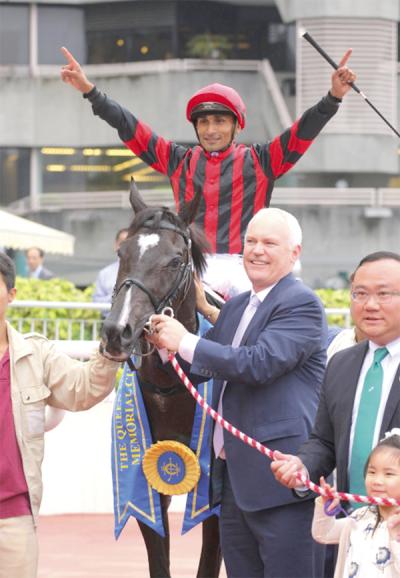 Back-to-back Group Three victories has put David Hall’s Bubble Chic in the reckoning for a Group One – more than two years after the top level race the expensive import was actually purchased for.
Bubble Chic, runner-up in the 2011 French Derby, was bought by owner Edmond Siu Kim-ping for the 2012 Hong Kong Derby, before quarantine complications delayed his arrival and scuttled those plans. Since then, Bubble Chic has spent more than 12 months dropping in the ratings, and was subsequently gelded. Now the six-year-old may head to the Group One Standard Chartered Champions & Chater Cup as a leading hope in three weeks after jockey Karis Teetan stole the Queen Mother Memorial Cup with a front-running ride that was nothing short of larceny.
« They just gave it to me, I couldn’t believe it, » Teetan said after walking through sections of 26.73s, 25.39s, 27.44s, 27.08s and 24.24s on the $21 outsider, leaving his rivals no chance as he kicked home the final 400m of the 2,400m trip in 22.74s.
Key to Teetan’s chances was 1.9 chance Khaya (Douglas Whyte) missing the start and allowing Bubble Chic to cross him from the widest gate of 10, Douglas Whyte losing a critical advantage on the favourite.
Khaya sat outside the lead, but failed to find when Bubble Chic kicked and finished second, with another outsider, Sunny Ying (Tommy Berry), splitting them for third.
The slack tempo worked against last-start winner and 3-1 second favourite Travel Brand, who was a disappointing ninth, his jockey Zac Purton saying the Dennis Yip Chor-hong-trained backmarker « never got into it ».
Bubble Chic had long been set for this event – an 80-plus handicap that has traditionally favoured horses down in the weights. But when John Moore decided to skip the race with Dominant, Bubble Chic was left as the top-rated runner on 102 and designated 133 pounds.
« I was very worried about the weight, especially because he is only a little horse, » he said. « I targeted the race thinking we would get a light weight, but we were horrified when there were no higher rated horses left in the race.
‘m happy with the way things have turned out with him, he has really come on this season – gelding him has helped a lot and some of these European horses, some of them take a little longer to come on than others. He has had a very good season now. »
Hall said level weights against the likes of Dominant was « another level » to yesterday’s win, but seemed positive about backing the French-bred stayer up.
« We will see how he pulls up, but he is going so well at the moment and he is one of those horses that races up on the pace and they make their own luck. To be honest, today I didn’t think we would lead – I thought Sunny Ying and Liberator would go forward like last time, but they were ridden differently. It worked out perfectly though, they went a small track canter down the back and at the halfway point we were thinking we were right in the race. »

A Twist of Class